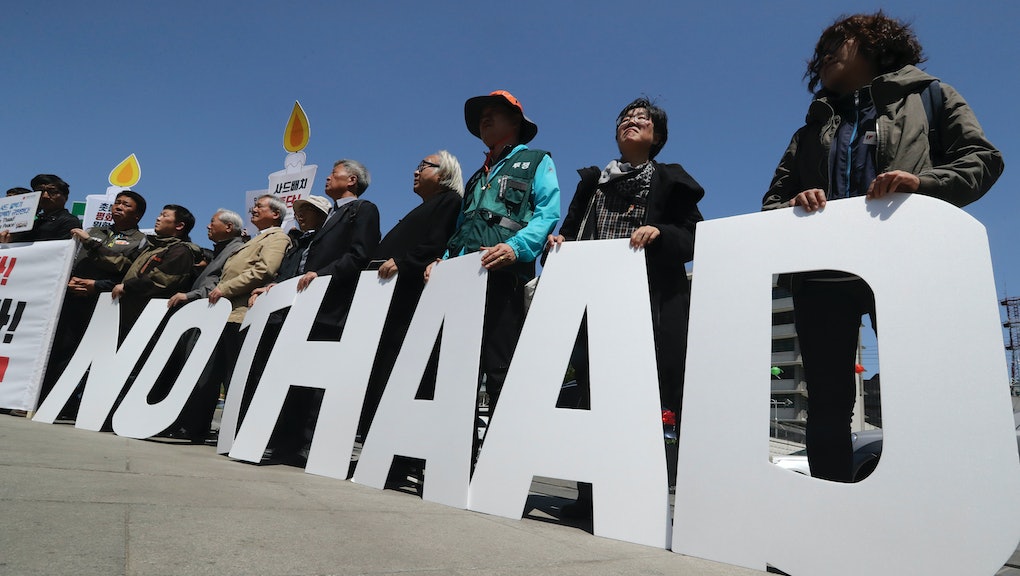 What is THAAD? 3 Things to know about the US missile defense system being installed in South Korea

Protesters took to the street in South Korea as the U.S. started suddenly constructing the Terminal High Altitude Area Defense, an antimissile defense system that opponents believe is being quickly constructed before a new president takes over the region who would likely oppose it.

"Each THAAD battery includes at least six truck-mounted launchers that carry up to eight missiles each," per the Washington Post.  "They are designed to shoot down enemy ballistic missiles like the ones that North Korea has been launching at a steady clip."

According to Reuters, hundreds of people gathered to protest the installation of THAAD, while presidential front-runner Moon Jae-in, the leader of the left-leaning Democratic Party, says that moving forward with the process at this juncture "ignored public opinion and due process."

The system itself is specifically designed to shoot down the missile types that North Korea is claiming to already possess.

CNN spoke with Lockheed Martin, the primary contractor on the THAAD project, to ask specifically how the system would work.

"Each THAAD system is comprised of five major components: interceptors, launchers, a radar, a fire control unit and support equipment [...] The radar first detects an incoming missile. Those manning the system identify the threat. Then, a launcher mounted to a truck fires a projectile, which Lockheed Martin calls an "interceptor," at the ballistic missile in the hopes of destroying it using kinetic energy — basically just its sheer speed."

The system is considered safer than other anti-missile defense systems, because of its use of kinetic energy instead of warheads to destroy incoming missiles.

Also, per Hong Kong University military expert Yvonne Chiu, "If you hit a nuclear ballistic missile with a missile with no warhead, it would hopefully not cause a nuclear explosion."

Observers are already noting the current U.S. administration's actions, despite claims to the contrary, are war-footing signals.

Newsweek ran an in-depth piece on the possibility of war under the ominous banner "One Million Dead," referencing the phrase as a minimum casualty estimation.

Gizmodo, primarily a technology publication, published an editorial accusing American media of being complicit in a propaganda game to prime the U.S. populace for support of a U.S. initiated war against North Korea.

China has warned that the installation of THAAD is an unnecessary provocation that could serve to destabilize security in the region.

Meanwhile, President Donald Trump invited the entire U.S. Senate to the White House for a Wednesday meeting about North Korea in an obviously public signal that the administration is shifting U.S. policy.