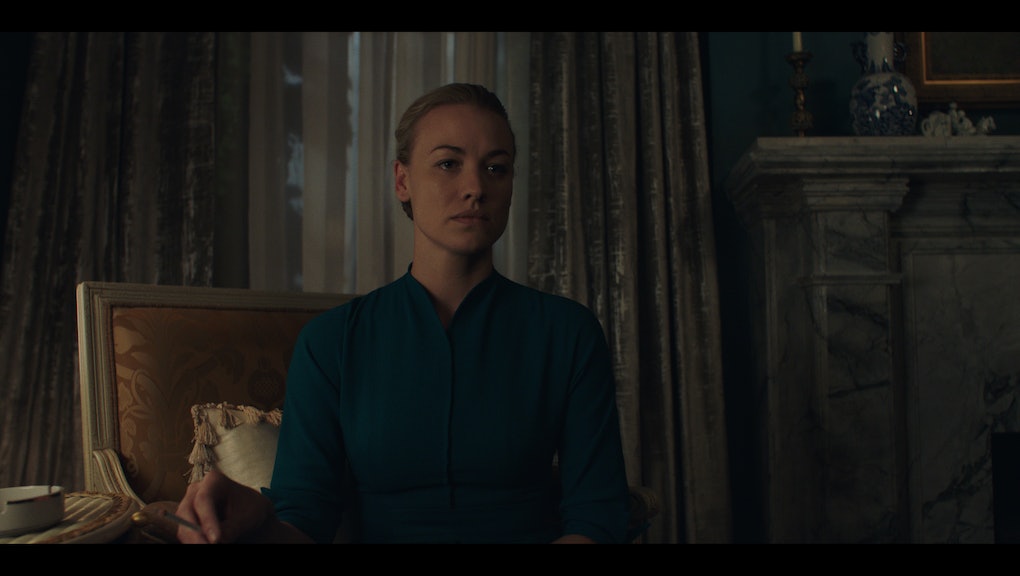 'The Handmaid's Tale': 11 terms from the book to know before watching the Hulu series

The Handmaid's Tale dropped its first three episodes on Hulu Wednesday for your bingeing pleasure. It's essential viewing as easily the best drama the streaming service has ever made, and one of the best shows of what has already been an exceptional year of television. Oh, and yes, there are some very unsettling and timely parallels that can be made between the series and Donald Trump's America.

However, before you begin your Handmaid's Tale binge, it helps to be familiar with some of the colloquial terms used in the show borrowed from its source material: the Margaret Atwood novel of the same name. It's not necessary to enjoying or understanding a compelling show, but knowing what a character says when they refer to something as innocuous as "Eyes" without a quick Google search or referring back to the text is, at the very least, more convenient.

Here's 11 terms from The Handmaid's Tale to be familiar with, as they'll keep popping up throughout the series.

The Republic of Gilead and Sons of Jacob

In the dystopian future The Handmaid's Tale presents, the country is in disarray from a steep decline in birth rates, which is attributed to increased pollution and radiation. So our American democracy is overthrown by a fundamentalist movement called the Sons of Jacob — basically, the novel's version of the alt-right.

The Sons of Jacob take a very extreme and literal interpretation of the bible, and by the time the novel starts, are Christian fundamentalists ruling over America. In their new seat of power, they call themselves the Republic of Gilead (many characters in the show will call it "Gilead" for short, offhand). In short: They're an evil regime subjugating women, the obvious bad guys of this story.

Handmaids are fertile women — again, a very rare thing — who have broken Gilead's established laws, which includes homosexuality. Because they are fertile, they avoid the harsher punishment of being sent to the Colonies (more on that later), instead serving as child-bearers for high-ranking officials and their infertile wives. At the most disturbing level, that means being raped by the official for the purpose of childbearing.

There's several characters in The Handmaid's Tale who are, obviously, Handmaids, including our protagonist Offred, played by Elisabeth Moss. Offred isn't her real name, but the name given to her by the Gilead because she's serving under a Commander whose first name is Fred. Hence, she is "of Fred."

If Handmaids are unable to produce children, or they have a child with birth defects, after three two-year assignments they are labeled as Unwomen and sent to work in the Colonies.

There's a few rankings for women in the Gilead's fucked up caste system, but Marthas, Aunts and Wives are the most frequented terms outside of Handmaids. Marthas are infertile women who work as domestic servants — their name comes from the "Martha" in a passage from the Book of Luke. In The Handmaid's Tale, Rita is the Martha of the household Offred lives in.

Aunts, typically older women who are unmarried, police and train the Handmaids by basically putting them through a brutal boot camp after they've broken the law. They teach them how to behave, punish them when necessary, and assist the Handmaids when they give birth. Aunt Lydia, played by a terrifying Ann Dowd, is one of the series' primary antagonists.

Wives are pretty straightforward: They're of a higher social standing than other women, as they're married to high-ranking officials. Serena Joy, played by Yvonne Strahovski, is the wife of Offred's commander. Serena has some Ivanka Trump vibes.

The Colonies are perhaps the last place you'd want to be in The Handmaid's Tale universe, aside from being a Handmaid. Colonies are essentially labor camps where people are forced to clean up hazardous radioactive waste until they die. When you hear the talk of "Colonies" in the show, that's a very ominous sign.

The Republic of Gilead refers to "gender traitors" as homosexual men and women. People who are found guilty as "gender traitors" are either sentenced to death or forced to work in the Colonies, which, based on the aforementioned working conditions, is akin to a slow, painful death.

Without getting too much into spoiler territory, there will be some characters in The Handmaid's Tale who will fall under this category, in which we'll see the harrowing punishment and aftermath.

Angels are the frontline soldiers of the Gilead. In other words, if you're going to serve in the army in this dystopian world, you'd become an Angel.

Eyes are basically spies — and that rhymed accidentally, I apologize. They conceal themselves as normal citizens of Gilead, where their main focus is to track down people who commit crimes, attempt to escape the republic or conspire to rebel. Since they can be anyone, there's a heightened sense of paranoia that you can't share your true feelings about Gilead with anyone.

Early into The Handmaid's Tale, Offred will learn that there's a possible Eye living in her household. The prime suspects? The commander's driver, Nick, and Rita, the house's Martha.

There's only one way to find out: Keep watching. Blessed be the binge.