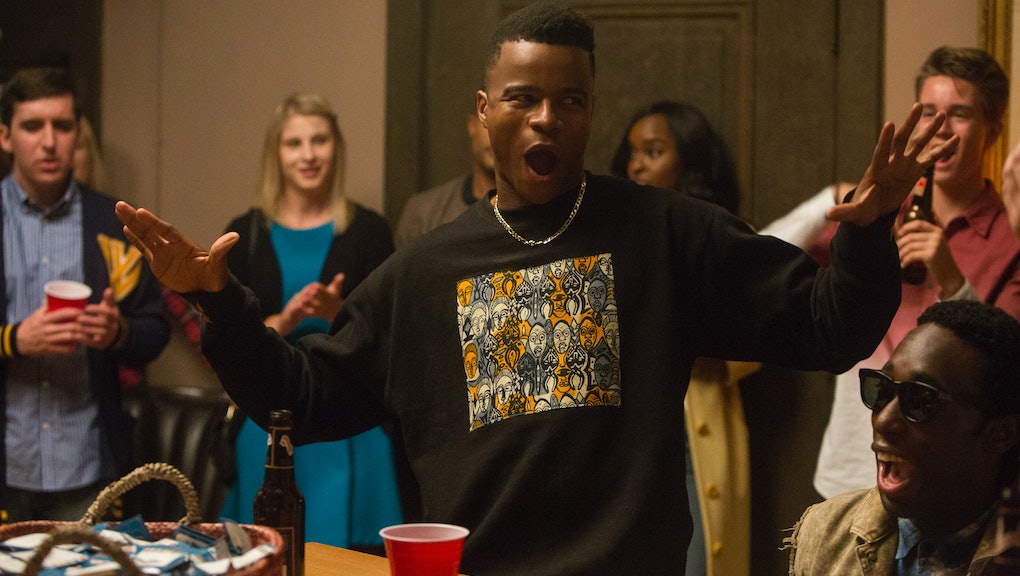 Through the first four episode's of Netflix's Dear White People original series, Reggie is easily the least interesting character. His one major defining character trait — his crush on series protagonist Sam White — carries over from Justin Simien's film, as does the actor, Marque Richardson.

Richardson ably communicates Reggie's self-seriousness, but he's much less enjoyable to watch than his costars, especially Antoinette Robertson as Coco Conners and Logan Browning as Sam White. So it comes as something of a shock when Reggie's focus episode turns out to be not only the best episode of this show, but also of 2017 TV as a whole.

Episode five of Dear White People, as directed by Barry Jenkins, is a character study of a rebel who's forgotten how to do anything else. It's a loose, fun exploration of multiple facets of black representation in pop culture, from Tyler Perry-esque movies to Iyanla: Fix My Life. But most of all, Jenkins' episode is a tense meditation on the everyday threat of police brutality, and exactly how damaging one white person's decision can be to black people's lives.

[Editor's note: Spoilers ahead for the first seven episodes of Dear White People. The ending of episode five is discussed in detail; we strongly advise not reading if you haven't watched yet.]

Perturbed by how quickly Winchester University's students have forgotten about the blackface party that occurs at the start of the series, Reggie is having a difficult time relaxing. Even the suggestion of attending a mixer or tailgate chafes at him. Why aren't they doing something more productive?

His friend Joelle is forced to give him a reality check: Rebellion isn't just about movements. "Sometimes being carefree and black is an act of revolution," she says. It's a remarkable line from Chuck Hayward and Jack Moore's script, one that almost instantly frees Reggie's character from his limited traits and allows him to shine.

After a day spent roaming campus, picking up friends like Lionel along the way, Reggie and his crew wind up at a house party. During a trivia drinking game, Reggie dominates, knowing the answer to every single question. "This game is culturally biased against me and I'm still whooping y'all's ass," he jokes with the mostly white crowd cheering him on. "I know y'all's shit and my shit!"

It's a tenuous peace for Reggie with the students he was railing against at the start of the episode, but it's peace nonetheless. "I'm smart as fuck," he boisterously brags to Joelle.

That peace doesn't last for long, of course. Reggie's white friend Addison raps the word "nigger" in a song on the dance floor, which perturbs Reggie. He tries to quietly tell Addison to stop, tensing up ever so slightly, but Addison pushes back. Reggie and Joelle again try to shut him down, but he keeps pushing.

"It's not like I'm a racist," Addison says, officially protesting too much. "Never said you were a racist," Joelle shoots back. There's something tellingly exasperated in Ashley Blaine Featherson's delivery of that line; she's said this before. She knows how this goes.

Reggie and Addison's conversation seems to be getting through to Addison, even after he briefly cries censorship. Then others get involved in the conversation, and it turns into a giant, cross-party argument. Addison won't get it into his head that no one called him a racist; his cry of "Can't anyone just have fun anymore?" falls on the most unsympathetic of ears.

Suddenly, nearly every black-and-white student pair erupts into arguments. Jenkins does a masterful job capturing the slow burn, then sudden quick spark, of chaos. An accidental push from another student leads to Reggie and Addison physically brawling the second campus security storms in — and suddenly the chaos is quiet.

The white security officer questions whether Reggie is a student, which Reggie balks at. He demands to see Reggie's ID but not Addison's, and despite Addison and Joelle vouching for him, the officer demands the ID. Joelle and Coco know Reggie's temper; they urge him to comply with the officer. He ignores them. "Fuck these pigs, man," he says.

Then the officer whips out a gun. Suddenly, a disagreement about words becomes a very real threat against a black student's life.

Richardson's performance in this scene is note-perfect. He lets Reggie's anger drain out of him in a second, breathing heavily and irregularly as he goes into his wallet for his ID. The officer never puts down his gun. Reggie is a finger twitch away from death. He closes his eyes, petrified.

After the officer sees his ID, he puts his gun away. "If you'd just shown that to me when I asked, we could have avoided all this," he tells Reggie. Coco cries. Sam is furious. Joelle is in disbelief. Addison looks wracked by guilt. And Reggie? Reggie is quiet, not even responding to his longtime love Sam's inquiries about whether he's OK.

The episode ends with Reggie sitting against his door as Sam tries to talk to him. He's paralyzed, unable to say anything. All he can do is cry and shake his head. Jenkins frames Reggie as small against the huge door behind him. He's battling post-incident trauma, and even opening the door to a friend feels like a monumental task.

There's not enough praise in the world for the duet Jenkins and Richardson pull off in this episode. It's a marvelous 25 minutes of television, working at a pace most hour-long series wish they could. So much happens that the episode requires multiple rewatches just to fully grasp every level Jenkins and Richardson are working on at once. It's not just about Reggie; it's not just about the routine and pressing threat against black men in America. It's not just about pop culture, or about what words are okay for what people. It's all of it, and frankly, even all that feels like just scratching the surface.

Dear White People is a pretty terrific series throughout, but this episode changes the entire trajectory of the story. Most significantly, in episode seven, Sam's white boyfriend Gabe reveals he was the one who called campus security. Two decisions by white men — Addison's to take offense to Reggie's request and Gabe's to call officers to the scene — put Reggie's life in danger. There's immense power in this: The everyday decisions by the "white people" in Dear White People actively threaten black lives. "Being carefree and black" can indeed be an act of revolution, but as Reggie learns, even that comes with a potentially fatal cost.