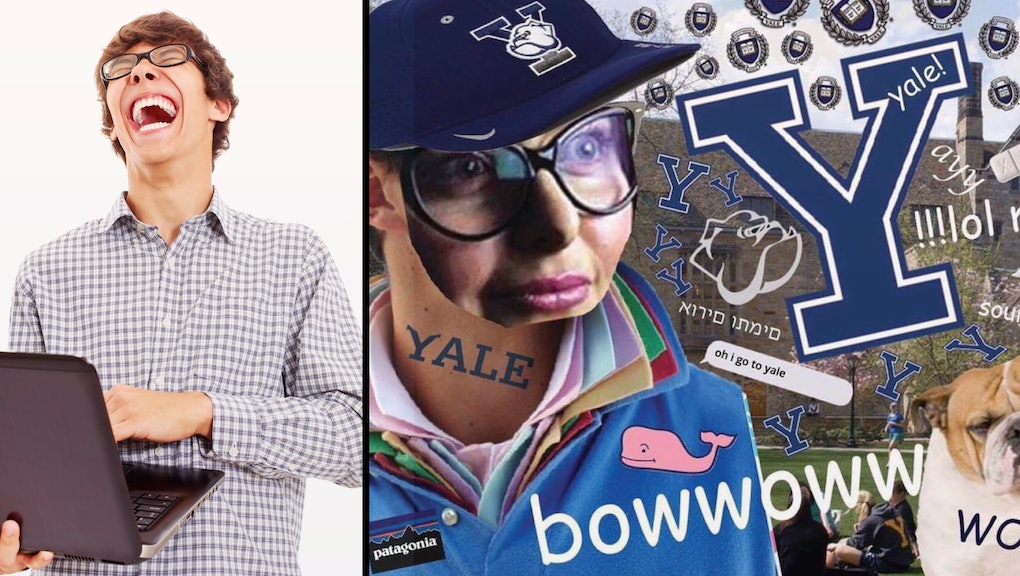 Inside the elite meme wars of America's most exclusive colleges

There's one thing almost every Ivy League university and elite college in America has in common in 2017: a thriving teen-themed Facebook meme group.

These groups, some of which have more members than the schools have students, have swept the campuses of Harvard, Columbia, Princeton, Penn, Yale, UCLA, USC, Dartmouth and more. Many are growing by thousands of users every day.

Students use the groups to make friends, chat and ultimately bond through a never-ending stream of niche memes developed specifically about each college.

In the fall of 2016, a Facebook group called "UC Berkeley memes for edgy teens" began to gain popularity outside of the college.

The group was founded in May 2016 by Chris Tril, then a junior at UC Berkeley, as a place to share funny memes about campus life. It grew under the radar within the campus community for over a year — until last fall, when membership began to skyrocket. Now it boasts over 85,000 members. Berkeley's entire student population is only about 28,000.

The trend caught on with students outside Berkeley, many at top colleges themselves. They took notice of the group and decided to form groups at their own schools.

Megan Andersen, a 19-year-old freshman at USC, decided to co-found her school's Facebook meme group after noticing that the school's rival, UCLA, had one, but USC did not. "It was finals week and we were procrastinating," she said.

Ephraim Sutherland, a 19-year-old freshman at Yale, said he also co-founded his school's group on a whim. "My friend and I were discussing memes over lunch back in November," he explained. "We were like, 'Why doesn't Yale have its own group?'" We decided to just make [it] on our phones right then." The group now has more members than the entire Yale student body.

Eric Qu, a 20-year-old junior at UCLA, said he founded his college's meme group one day after seeing the Berkeley group. "I added my friends and they invited theirs. Now it's 33,000 people," he said.

The groups all operate as Facebook groups, not pages, and are run collaboratively by teams of admins and moderators. These moderators help monitor the group, delete any spam or overt promotion and make sure that all memes relate to the college at hand.

You have to request to join most groups, and while some will verify that you're an actual student before adding you, most are open. Once you're in, you can meme freely.

Because the key to most college meme groups' success is staying on topic, it's frowned upon to post too many general or broad-based memes about college life. "Ideally, a really good school meme should only make sense to students at that school," one student at Berkeley said.

Jason Wong, a 19-year-old internet marketer and author of The Holy Meme Bible, said he believes that these groups are so popular because they allow students to better bond with their classmates, no matter what school they attend.

"It kind of encourages school spirit, and school spirit brings people together, no matter what race, gender, major," he said. "They will attack the same rivals and cheer for the same things. It really unifies students in general."

Old-school college rivalries play out frequently in college meme groups. Students at USC and UCLA consistently post about how bad the other's sports teams are. "We made a few jokes about UCLA last fall and they saw," Andersen said. "UCLA kids made some memes back about how their baseball team was better than ours. So we made some memes about how at least our football team doesn't lose so badly. We @ their page when we post memes about them so people in the UCLA group can be like, 'Oh, they're trash-talking us — here's our countermeme.'"

"The Ivies all love to get into meme wars. Cornell [made] memes making fun of Princeton for being in New Jersey. Princeton made fun of Cornell for being barely an Ivy." — Brandon Epstein, aka "Brandank Epstmeme"

Will Ye, the 19-year-old founder of Duke's meme group, said he's a veteran of "a lot of college meme wars." He said it's "sad" that "UNC doesn't have a meme group, so we can't throw shade at them."

Sometimes rivals work together on joint pranks. This past April Fools' Day, for instance, the admins of the Harvard and Yale Facebook meme groups agreed to swap names for a day. Students in the Harvard group thought for a minute they had been added to the Yale group, and vice versa.

For new students, meme fame can lead to real-life popularity

Most founders of meme groups are freshmen. As the groups have grown, their admins have gained notoriety and often unexpected social clout.

Ye says that even though he likes to remain low-key, founding the most popular meme group on campus has helped him make friends. He's met so many fellow meme enthusiasts that he's even considering registering an official Duke club for memes.

"People become well-known on campus as memelords," Lorenzo Bartolini, the 19-year-old founder of UChicago Memes for Theoretical Midwest Teens, said. "It's just like any other way of becoming popular."

Andersen said she gets recognized around school fairly often: "Some of my friends have mentioned that they're friends with me to other people, and they're like, 'Oh, that's cool that you know the meme girl.'"

"Another freshman came up and was like, 'I know you from the meme group! Can I take a picture of you?'"

John Lynch, a 21-year-old freshman at USC, didn't have anything to do with the founding of his college's group, but he has become famous on campus just for producing top-quality memes.

"People come up to me at school all the time like, 'You're the memes kid!' I'm like, 'I have a lot of other things about me too, but yes.'"

Claudette Beane, an 18-year-old moderator of the USC group, said she had people message her after applying to a study-abroad program. "They were like, 'Oh, we saw your memes and they're really funny,'" she said.

Due in large part to their popularity, college meme groups have also begun to serve as a recruiting tool. Admins of all the top groups we spoke to said that they've seen a big influx of prospective freshmen over the past semester looking to suss out what campus life is like at different schools.

"For many prospective freshmen, they can visit the college with their parents or whatever, but the meme group is their first taste of college life," said one group founder.

"I have a friend from Wisconsin who is deciding between Yale and Harvard, and he said that the meme groups have played a big part in his decision," Sutherland, co-founder of Yale Memes for Special Snowflake Teens, said.

"I definitely think there's an effect on meme groups and college admissions," Ye said. "UC Berkeley has the biggest college meme group, and maybe that won't directly affect a kid's decision to apply, but it will certainly boost the signal and get it on more people's radars as a good school. I know a lot of prospective freshmen have joined Duke's meme group."

"I know a lot of prospective freshmen have joined Duke's meme group."

Meme-based scouting may never replace traditional college visits, but the groups do provide a valuable window into what's happening on different campuses.

"I didn't know that much about a lot of schools before the meme groups, so I think it helps you learn what life is like," Sutherland said. "Like, a lot has happened at Berkeley this year, and I've watched it all unfold on the meme page before it's even reported in news outlets... It's how you keep up with stuff."

It's no coincidence that freshmen are leading the meme renaissance

The fact that the teen meme Facebook group trend has been driven largely by first-year students is no coincidence. Many freshmen have more time on their hands, while juniors and seniors are often bogged down with thesis work or securing employment after graduation. But there are also subtle generational differences between first- and fourth-year students in 2017.

Current freshmen, many of whom were born in the year 1999, are among the first members of the post-millennial generation, known as Gen Z, to enter college. Unlike the upperclassmen just a few years above them, many of these students feel that they were "raised on memes" in a way their elders weren't.

When he was in sixth grade, around 2009, George Iskander, the 19-year-old co-founder of Yale's meme group, dressed up as an internet troll for Halloween, trick-or-treating with a sign that read, "U mad bro?"

"I have grown up my entire life with the internet," he said. "The internet has always been there. It's something that I use to get information, learn, consume content, connect with people, waste time on, read. If you spend enough time on the internet, you just absorb memes."

"We're the ones that have been most immersed in meme culture," Epstein said. "When last year's freshmen became freshmen, memes weren't the cultural monolith they are now. Considering that memes really rose to mainstream prominence during the time when we were in high school, I think there's a bigger focus on memes for people my age."

Younger students are also more likely to be connected to others online before even arriving at campus. Most can't remember a world without smartphones, social media and group chat. "Coming into college, I had a lot of friends on the internet who were coming to Yale, and we would share memes back and forth," Sutherland said.

The meme emperor has a few regrets

For Tril, the 21-year-old founder of the UC Berkeley group that started it all, the success of the meme group has been bittersweet.

In January, he published an open letter in his college paper; it was titled "Memes Were a Mistake." In the letter, he outlines his regrets about what he started. He eventually wants to be known for more than just his memes, he wrote.

"People know my name because of my memes, not because of my articles," he wrote. "A picture of a dog wearing an apron I posted got more likes than anything I had ever written for the Daily Californian. That shit cuts deep, yo."

More recently, he has softened his stance. He's open to the fact that creating such a high-profile Facebook group might actually help his career prospects as an aspiring journalist.

Other group founders are just happy that they made something amusing to get them through freshman year.

Ye thinks the Duke group will keep up momentum over the summer, but if it all goes away tomorrow, he said, it wouldn't be the end of his life.

"I don't think making this group is really going to help my career anyway," Luke Cuomo, the 18-year-old founder of Dartmouth's group, said. "It's not like I'm going to go into an employer and be like, 'Uh yes, I actually founded a successful meme group.'"

Epstein, of MIT, said that he doesn't see memes or the groups disappearing anytime soon. "Memes have been around for a long time and they're only getting more popular," he said. "Memes just really get the noggin joggin'. They're not going anywhere."