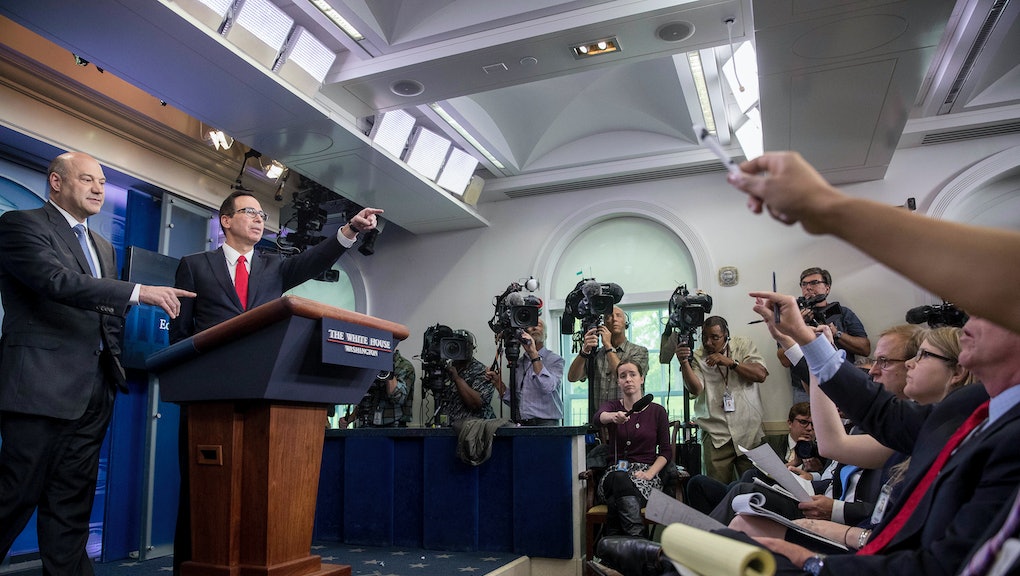 Navigating Trump's America: The Donald Trump tax plan is something we've seen before

In his first 100 days, Trump rolled out a plan to cut taxes across the board. The plan would add trillions of dollars to the deficit while lowering the tax burden on all Americans, particularly the wealthiest. "Tax relief is right, and tax relief is a right."

That plan, and those words, are not President Donald Trump's. That was George W. Bush's. Bush proposed the first of two "Bush tax cut" bills in 2001. He followed through on promises he made less than a month after his inauguration.

Now, Trump is making his play at cutting taxes, bigly. The Trump administration on Wednesday promised the "biggest individual and business tax cut in American history." The plan is only one-page right now, a minimalist beginning to negotiations with Congress that will eventually yield a bill that could be hundreds of pages or longer.

We've seen this movie before: The White House promises to cut taxes, especially on businesses and the wealthy, to spur economic growth. That has a mixed track record, at best. The Bush era, with its continued focus on deregulation, culminated in the near collapse of the U.S. housing market and Wall Street. It's also far from clear these tax cuts stimulated the economic growth that was promised, with rich Americans holding more money than at any point since World War II.

After eight years of President Barack Obama making marginal gains on reversing the Bush cuts, Trump wants to go even further in the opposite direction. Trump's tax cuts would:

•  Would keep anyone from paying taxes on their first $24,000 of income (doubling the standard deduction)

Short on detail, Trump's plan will undergo major revisions as it moves through the House and Senate. Republicans on Capitol Hill called it a "guidepost" as they begin their work on tax reform. Democrats are already calling it "a giveaway to corporations and those at the top."

Broadly speaking, Trump is going a step beyond what Bush did 16 years ago. The economic theory of "cut big, grow big" has been pushed by Republicans for years. With full control of Congress, they'll get a chance to implement a yuge, Trumpian tax cut.

Stay tuned for the details on how it affects the little guy. Right now, we just don't know. It's worth noting that Thursday morning, Treasury Secretary Steven Mnuchin could not guarantee the middle class won't pay more under this tax plan.

This is Mic's daily read on Donald Trump's America. Welcome to the political newsletter this is not expecting a tax cut.

Today: Trump's tax plan has eerie similarities to one announced 16 years ago.

More: Rumor has it a health care vote could happen by Saturday — the end of Trump's first 100 days. But don't hold your breath.

Even more: It's not confirmed yet, but a government shutdown seems unlikely.

Yes, more: Only a fifth of Republicans held town halls in April.

Trump's agenda today: Hosting the president of Argentina. Signing a memorandum that could prevent imports of foreign aluminum. Creating an accountability office at the Veterans Affairs.

Health care is surging toward a vote, maybe

Politico reported that after the health care failure in early March, Trump was saying this a couple days later: "I'm not going to give it up." So began a new strategy, led by Vice President Mike Pence, of wooing Republicans on Capitol Hill to support a revised health care plan. The House Freedom Caucus, which held up Trump's last health care bid, announced Wednesday its members would support the latest plan. This time last week, House Republicans were highly skeptical they could bring a health care vote to the floor. Now, they're increasingly bullish.

It remains to be seen whether this reform is actually good for Americans. Without a score from the Congressional Budget Office, we can't know how many people could lose or gain insurance under the latest GOP plan. But since the plan shares many similarities to the last one, we can wager there will be a net loss of Americans with insurance if these changes come to pass.

The latest proposal would mandate, at the federal level, insurance companies continue to cover pre-existing conditions and "essential health benefits," things like maternity care and hospital stays. But states could opt out of requiring that coverage — essentially creating 50 different standards for what insurers have to cover, changing what insurance people will have depending on where they live.

That out has pleased conservatives, but now moderate Republicans may kill the bill. The leader of a moderate group of Republicans in the House remains opposed to the legislation, which would keep the GOP promise to reform the Affordable Care Act but would hurt Americans with pre-existing conditions.

The takeaway: Despite the narrative that Republicans are getting somewhere on health care, GOP leaders may have pushed too far and alienated too many centrist Republicans. A vote Saturday may be in the cards, but the votes are not there yet.

•  Trump sent signals he was preparing to pull out of NAFTA, then quickly backtracked by telling the leaders of Canada and Mexico the United States would not pull out — yet. (Mic)

•  Trump's memorandum on aluminum, like the one he signed on steel last week, will order an investigation into whether importing aluminum is a national security threat to the U.S. (USA Today)

•  The president's order on accountability at the Veterans Affairs will make it easier for the agency to fire unfit employees. (ABC News)

•  Ivanka Trump says admitting Syrian refugees to the United States "has to be part of the discussion." (Mic)

•  The president wants to break up the federal 9th Circuit Court of Appeals. He can't actually do that. (Daily Beast)