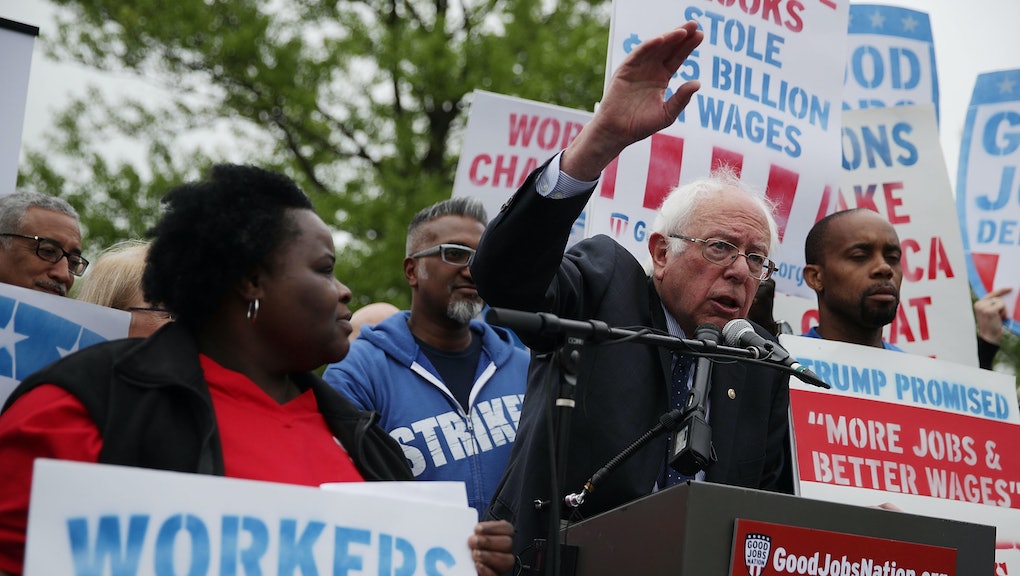 Bernie Sanders' new bill would raise minimum wage to $15. Does it stand a chance?

Sen. Bernie Sanders and nearly half of Democratic senators on Wednesday renewed the push to raise the federal minimum wage to $15 per hour.

Sanders, an independent who caucuses with Democrats, introduced the Raise the Wage Act the same day President Donald Trump unveiled a massive tax cut plan, which would benefit Trump personally.

"There is something profoundly wrong when we have a president, and we have Republican congressional leaders, who are working overtime for tax breaks for billionaires, but they have nothing to say about raising the minimum wage," Sanders said Wednesday.

Sanders pushed to raise the minimum wage in 2015, but his efforts failed to garner much support. This time around, more Democrats — including Senate Minority Leader Chuck Schumer — are backing the plan.

It'll still almost certainly fail in the Republican-controlled Congress, but Adam Shah, senior policy analyst at Jobs With Justice, a workers' rights nonprofit, says the new bill sends an important message to those in power in Washington, D.C.

"I think it's a message from working people to Washington that a $15 minimum wage is something that has strong support," Shah said in an interview. "Nobody has to be afraid of a $15 minimum wage bill. Progressive politicians and the mainstream of the Democratic party have picked up on that and they're saying we have a different vision for how working people should be treated."

Terrence Wise, a Kansas City, Kansas, McDonald's worker and a leader with Fight for $15, said in a statement provided to Mic that the proposal shows how much momentum the issue has gained, and that a livable minimum wage has gone from "laughable to inevitable."

"With today's announcement, it's clear that our Fight for $15 has set a new standard. Democrats across the board support $15 an hour, because they know it's the bare minimum workers like me need to support our families," Wise said in the statement. "We're going to keep striking, marching and speaking out until every worker in the country wins $15 an hour and union rights."

Fights ahead for working people

Sanders and the Democrats released the Raise the Wage Act ahead of the likely confirmation of Alexander Acosta, President Trump's pick for Labor secretary.

Acosta is considered a safer, more moderate choice than Trump's original nominee, Andrew Puzder, who withdrew from consideration after the release of a tape of his ex-wife accusing him of spousal abuse on a 1990 episode of The Oprah Winfrey Show.

But, Shah told Mic, workers still have plenty to be concerned about with Acosta.

Though Acosta signaled during his confirmation hearing in March that he'd be open to expanding overtime pay to more workers, he also waffled on a number of questions and said he'd follow Trump's lead on key labor issues.

"His guiding principle will be to implement the president's agenda," Shah said.

Trump has proposed cutting $2.5 billion from the Department of Labor as part of the "skinny budget" outline he released in March. He is also reportedly considering naming a prominent Minneapolis union-buster, Doug Seaton, to the National Labor Relations Board.

Shah said that if Acosta does not stand up for working people, workers will have to keep the government in check.

"It will be important to make sure the Department of Labor is held accountable," Shah said. "I don't think it will happen without pressure now from working people."