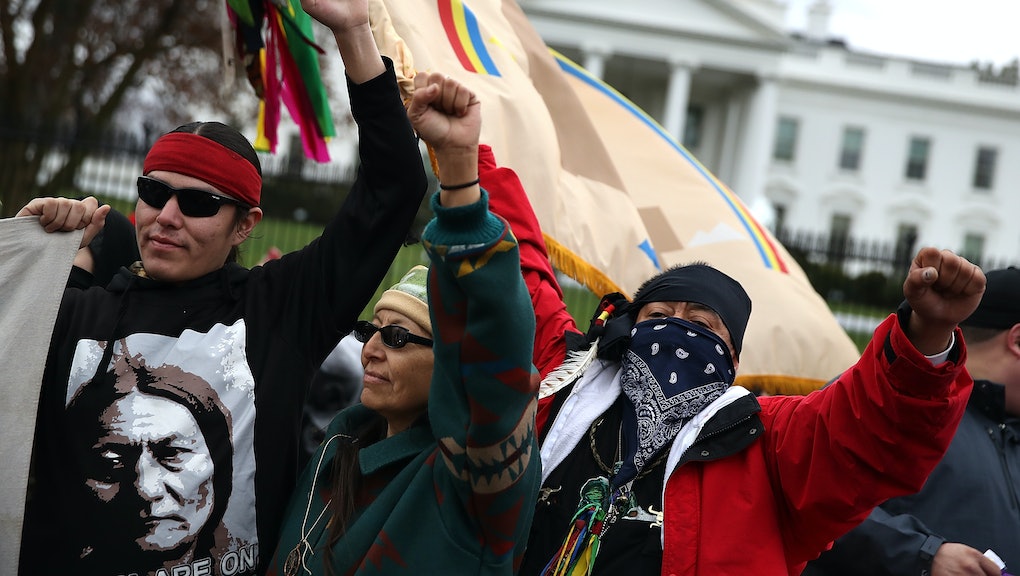 The day of President Donald Trump's inauguration wasn't just the beginning of an unprecedented presidency. It was the launch of one of the most sustained protest movements in American history.

Over the past 100 days, immigrant communities showed the force of their protest, anti-fascists have lashed out violently at the rising tide of white supremacy and anti-war coalitions long dead have come to life with renewed interest and energy. They chose their battles, and they often won.

Here is a concise look back at some of the most significant marches, disruptions and protests that pushed back against Trump's agenda at every opportunity.

Planned in a church sanctuary, the massive #DisruptJ20 demonstrations locked Washington in an embattled state of protest throughout Inauguration Day, kicking off the past 100 days in near-constant resistance.

Climate-justice activists, anti-war protesters and Black Lives Matter demonstrators joined a coalition of a dozen groups to shut down the entrances to the inauguration. Throughout the the nation's capital, marchers shut down streets.

And in downtown Washington D.C., a black bloc faced off against police, who fired pepper ball guns and stun grenades onto the crowd — the first violent eruption in a wave of anti-fascist events across the country since that day.

The Women's March on Washington

Only one day after Trump's inauguration, the women of the world came out against the misogyny and sexual violence during the campaign. The Women's March on Washington, including its sister marches from across the country, became the single largest protest action in United States history.

For many participants, it was the first taste of protest, inaugurating thousands of Americans into a new career of civil disobedience.

As lawyers worked furiously throughout the night to identify detainees and get them legal assistance, protesters outside shouted "Let them in, let them in!" until a federal court overturned the order. The protests have been credited by legal advisers for the court's swift, decisive action.

In one of the first great strikes of the Trump era, Yemeni bodega owners put signs on their windows saying they would not be working out of solidarity with immigrants shut out by the Muslim ban. Videos of the call to prayer went viral where the bodega workers gathered in Brooklyn.

And at the airport in NYC, another few hundred Muslim men and women gathered for a prayer action in solidarity with the detainees still held at JFK's international arrivals.

The last stand of Standing Rock

Once the Trump administration pushed through the Dakota Access Pipeline Project, the verdict was in — the resistance camps would be evacuated or forcibly raided. And raided they were.

On the final days of the Standing Rock resistance, dozens were arrested as the water protectors ceremonially set fire to the structures that once housed a prayer community of thousands.

But that hasn't stopped their movement from marching on. Solidarity rallies in cities across the country have come out to march for indigenous sovereignty struggles. Standing Rock wasn't the first frontier for Native American environmental action, and it won't be the last.

Indivisible at the Town Halls

In 2017, liberals finally got their own version of the Tea Party. Indivisible, a grassroots movement designed to take back Tea Party tactics from the conservative agenda, started popping up across rural America.

At town halls held by both Republican and Democratic representatives, massive crowds turned out, overflowing in the streets and demanding that Congress hold Trump accountable throughout his first term.

The sudden rise of white supremacists meant that American leftists had to turn to a tactic that was long considered unnecessary in the United State: the black bloc. From pro-Trump rallies replete with white nationalists to the university lectures of right-wing demagogues like Milo Yiannopoulos, there were anti-fascists donning masks and punching Nazis.

The right-wing media has taken the opportunity to paint the Antifa as a terroristic threat, pointing to its violence as a last resort in the alleged decline of liberal tolerance.

And in response, the alt-right is forming its own street gangs, anxious for more attempts to hold free-speech rallies to draw out anti-fascist counter-protesters. It's likely this is only the beginning of the violence.

The March for Science

It began with a single Reddit post and became a worldwide movement. The March for Science brought out scientists and their allies to tell the government that they want evidence and research to inform policy.

It wasn't just the U.S. — marchers came out across Europe, South America and Asia. Where they couldn't march, in cities like Singapore and Istanbul, they held brunches and talks.