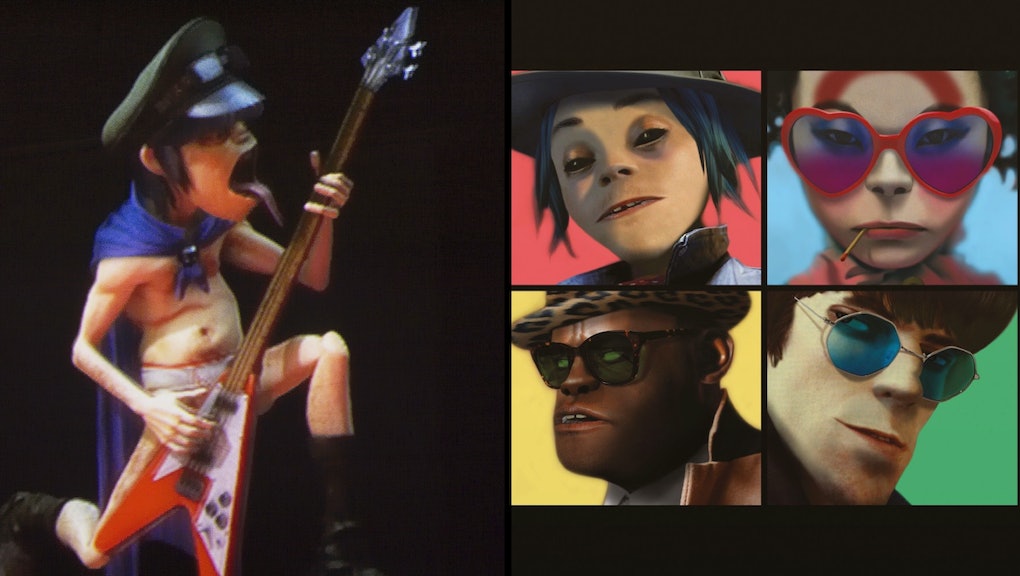 The Gorillaz have always been a grab-bag project. It's where Damon Albarn, distinguished Order of the British Empire member and Britpop mastermind behind Blur, keeps his synth music — be it prog grunge, charging electropunk or symphonic vaporwave. In 2014, when Albarn was still on the outs with Jamie Hewlett, his Gorillaz collaborator animator, synths were the only vital portion of the project for him: "What makes a Gorillaz song different than anything else I do is very simple: I just use synthesizers," Albarn told Stereogum. "Are you asking me if I'll make another album someday with synths and drum machines? Sure."

Three years later, that album — the guest-heavy Humanz — is here under the proper Gorillaz banner. Its 20 tracks stretch the Gorillaz's catch-all style to its absolute breaking point, attempting the seemingly impossible task of blending the talents of D.R.A.M., Mavis Staples, Zebra Katz, Pusha T, Danny Brown, Kali Uchis and more into a coherent whole. It only barely holds together, but through something far more impressive and daunting peers through the stretched fabric, it gives new life to the Gorillaz enterprise.

The album's curated sonic chaos reflects a much larger darkness out in the real world, one that threatens to consume all life, all art and all music, synthy or otherwise. It's the specter of Brexit, the dogmatic xenophobia of President Donald Trump, an active white nationalist movement, the pains of a capitalist system gone mad. The collected voices speak to those fears and look beyond them to find joy in the face of the apocalypse. It feels Prince-like in the way it blends the random, the satirical and the hopeful. It lives the "Let's Go Crazy" motto: "Let's look for the purple banana / Until they put us in the truck, let's go!"

The Gorillaz have grappled with the apocalypse before. Demon Dayz danced with the catastrophe of gun violence and herd mentality, though Humanz takes a more focused approach. Its specific vision of doom feels a reflection of the famed Fredric Jameson quote: "It has become easier to imagine the end of the world than the end of capitalism." The all-star cast spends the majority of its time meditating on greed, power and the destruction it's bound to bring.

"Won't get saved by no Superman," Danny Brown, whose devil-may-care zaniness makes him a no-brainer Gorillaz collaborator, spits on "Submission." "All comes down to the mighty dollar / Greed and lust, abusing power."

Every guest takes their own path. Gospel luminary Anthony Hamilton likens the descent into madness as being like a "carnival" ride, while gritty realist Pusha T can't help but saying the doom bringer's name on "Let Me Out": "They say the devil's at work and Trump is calling favors," as the Genius lyrics read. "You say I'm dangerous, I speak for the nameless." Albarn bleeps out the mention of Trump's name in the album's final cut, because, as he explained to Billboard: "I don't want to give the most famous man on earth any more fame, particularly. He doesn't need it!"

It gives the record far more power to spark the imagination and helps direct the listener's attention to what's actually missing in the world — love, joy, a sense of camaraderie. "We did it before / And we'll do it again," Jehnny Beth sings on the album's closer "We Got the Power." "We're indestructible."

When the band first released "We Got the Power" as a single, it felt cheap, a pithy anthem aimed at nothing in particular. But after the crushing dissonance and erratic course of the record, it actually hits. The Gorillaz have managed to paint a "dark fantasy" so disturbed and dark that the record's unabashedly cheesy joy actually feels liberating. That's not an easy thing to do.

The depth of this apocalyptic vision makes the album — and the colorful Gorillaz world — feel far more significant than a simple vehicle to deliver synth music. It's good because the Gorillaz' world has only been growing, with an augmented reality app bringing the lead-up to life and a 10-episode TV show still forthcoming. Albarn sees even bigger things for the future.

He wants to see the virtual band members perform holograms and eventually hopes to "pass [the band] on to the next generation," he told Billboard. Now that he's proved how effectively he can rally music's most disparate voices around a shared critique, such a future actually seems worthwhile.