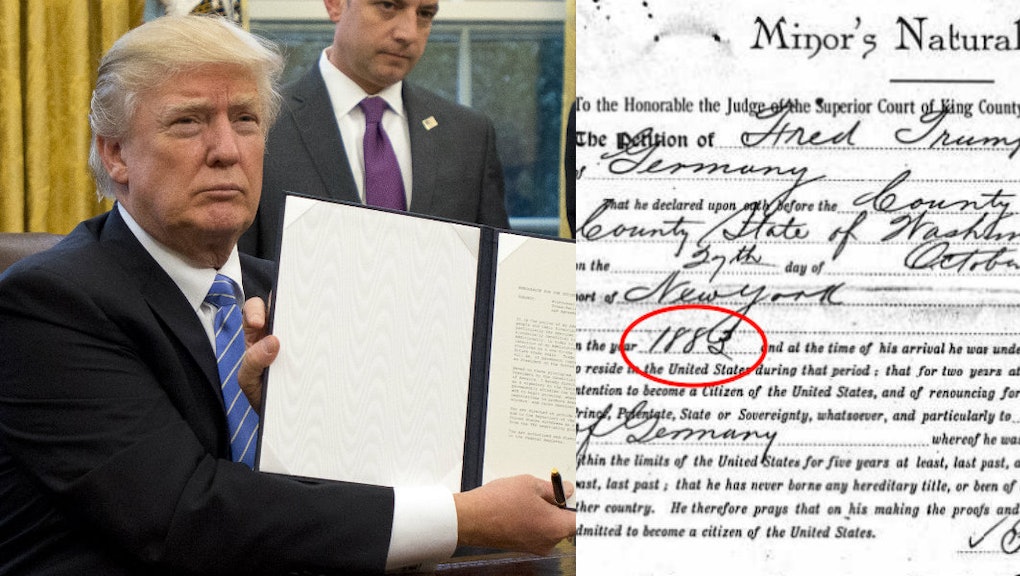 If the Justice Department had its way, Trump's grandfather's citizenship would be revoked

On Thursday, Justice Department attorneys argued before a shocked Supreme Court, that immigrants with even minor innacuracies on their naturalization forms should be subject to having their citizenship revoked at any time in the future.

Does that mean it's too late to revoke the citizenship of President Donald Trump's own grandfather? After all, Trump's grandfather Frederick Trump misreported the date of his immigration by two whole years on his application for citizenship.

The inconsistencies came to light late Thursday night through the tweets of a 16-year-old named Elana Kopelman, who went digging through Ancestry.com for Frederick Trump's naturalization documents. Kopelman found that the reported information on the elder Trump's application doesn't line up with the government's records of Trump's family history.

It's widely available knowledge that Donald Trump's grandfather came to America in 1885 on a ship from Bremen, Germany. But as Kopelman discovered, when Fred Trump went through the naturalization process seven years later, in 1892, he reported his year of entry as 1883 — contrary to every other available historical record indicating he arrived in 1885, such as his passport application.

After gaining citizenship in the United States, he later returned to Germany, where he was deported in 1905 for failing to carry out his mandatory military service.

"We were paralyzed with fright; our happy family life was tarnished," Trump said of the experience of deportation in his letter to the Prince of Bavaria. "My wife has been overcome by anxiety, and my lovely child has become sick. Why should we be deported? This is very, very hard for a family."

Fast forward over 100 years to Wednesday. Justice Department attorneys attempted to argue before the Supreme Court that any small lie or omission on naturalization forms should put one's citizenship up for question at any point in the future. This included, in one example, revoking someone's citizenship 20 years later because they failed to disclose at the time that they'd once driven over the speed limit.

Some Supreme Court justices were horrified, saying that the argument was "demeaning the priceless value of citizenship."

Of course, if Trump's Justice Department had its way, that would mean Fred Trump's citizenship would be up for swift revocation, and not just for some trivial detail.

Then again, revoking the citizenship of someone who came to the United States as a teenager seeking to make a life for himself, if such a thing were to happen, would be a deep shame.