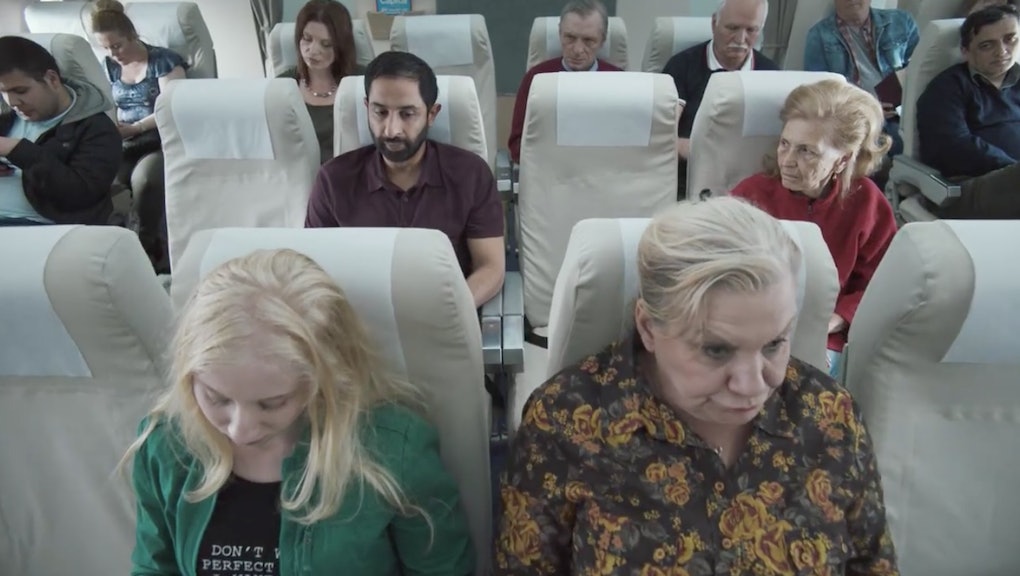 On Thursday, Royal Jordanian released an online ad tackling an issue most Arabs and Muslims face while on an airplane: discrimination. The ad places viewers in the shoes of a presumably Arab man, as passengers board the plane. While several people stare and glare into the camera with suspicion and fear, the ad features the voiceover of the man sharing his own fears of being be feared.

"I'm afraid I end up somewhere I don't want to go," he said. "Afraid of being stuck in a place where people look at me differently. I'm afraid of the 'what ifs.' What if something wrong happens, and they don't believe me? What if they don't ask and just act on their fear?"

The man then points out how something as simple as a book or beard can criminalize someone who looks Muslim or Arab. "They don't know who I am," he said. "They look at me and only see a color, a name, a beard, a book."

The 60-second ad closes with viewers finally seeing the man. He's sitting next to an older white woman who glares at him with suspicion. He's squirming in his seat. He's visibly uncomfortable, insecure and afraid, but the ad leaves viewers with one powerful final message: "Don't be afraid to say no to discrimination."

This isn't the first time that Royal Jordanian Airlines has taken on xenophobia. The company launched a brilliant marketing campaign amid the 2016 presidential election. On Election Day, the Royal Jordanian Twitter account tweeted fare prices to Chicago, Detroit and New York with a snarky jab at Donald Trump's xenophobic campaign promises: "Just in case he wins, travel to the U.S. while you're still allowed to!" One week after Trump signed his Muslim travel ban, the airline company jumped on the opportunity to make profit while condemning the new policy.

Then when the Trump administration announced an electronics ban on items larger than a smartphone from 10 Middle Eastern and North African airports, Royal Jordanian struck again by tweeting a list of 12 things to do without a laptop or tablet on a 12-hour flight. Some of the other ads and tweets included poems condemning the Muslim travel ban and a writing contest as a hit on the electronics ban.

The airline company even cleverly went after United Airlines after it dragged Vietnamese-American doctor David Dao from an overbooked flight. On April 10, Royal Jordanian tweeted, "We are here to keep you #united. Dragging is strictly prohibited," as a reminder for passengers to not smoke in the airplane.

Since 9/11, numerous airline carriers have discriminated against Muslims, Arabs and Sikhs. In December 2015, an American Airlines flight attendant singled out a Muslim passenger by name before removing him from his flight. In April 2016, Southwest Airlines booted an Iraqi refugee from an airplane because he spoke Arabic on the phone. And in May 2015, an United Airlines flight attendant refused to give an unopened can of Diet Coke to a Muslim woman because she might "use it as a weapon." The discrimination has escalated to the point that some airline carriers are finding ways to screen Muslim passengers on upcoming flights based on what in-flight meal they select.

But with this anti-discrimination ad, Royal Jordanian is taking a different route from their competitors — at least publicly. And, hey, it also seems to be working to their benefit.

Royal Jordanian did not yet respond to Mic's request for comment.

You can watch the ad in full below.