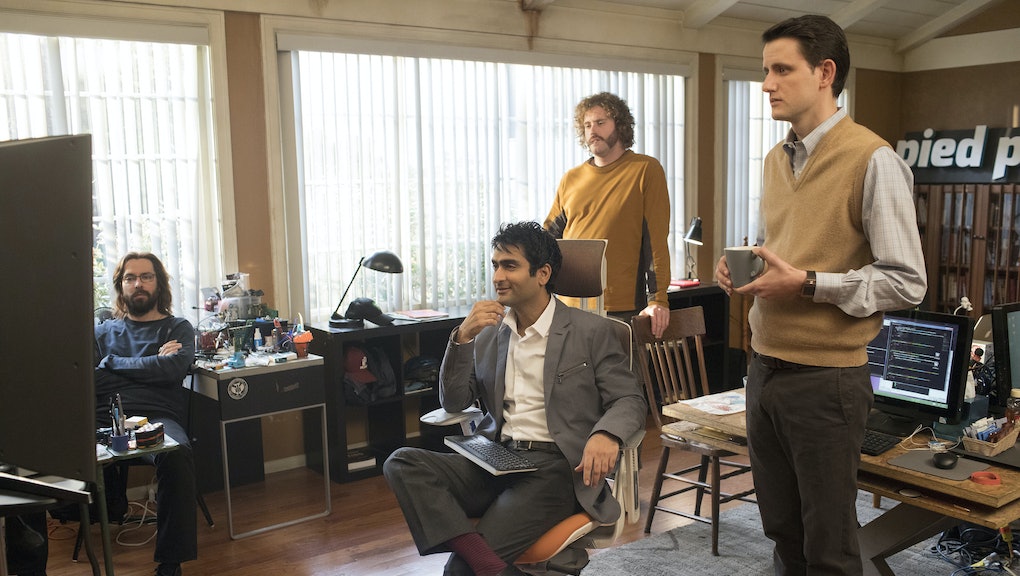 In Mic's TV Club, senior arts writer Kevin O'Keeffe and arts writer Miles Surrey will watch an episode of a TV show with no regard to how familiar they are with it. After it airs, they dissect it in a conversation with another Mic staffer. This week's show: HBO's Silicon Valley, with guest Samhita Mukhopadhyay.

Miles Surrey: We're now in the fourth season of HBO's Silicon Valley, and while everyone's still living in Erlich Bachman's incubator, eating pizza and playing bad drinking games, Pied Piper has changed dramatically. Richard is off doing his own thing, and it's no small task: He's creating a new internet with the help of his compression algorithm.

Meanwhile, the rest of the group is working on Dinesh's Piper Chat app, which is basically a better Skype. But Dinesh's turn as CEO in the second episode of season 4, "Terms of Service," is a complete disaster, much to Gilfoyle's delight. With a ton of child users and no proper terms-of-service agreement, Piper Chat is a hub for potential sexual predators — which, as Jared dutifully notes, is disturbingly in line with the Pied Piper children's fable.

Kevin and Samhita, you're both familiar with Silicon Valley (it's one of my favorite comedies on TV). How are you guys liking the fourth season and the change in formula for Pied Piper as well as the series?

Kevin O'Keeffe: I didn't watch the fourth season premiere, and I actually am still a full season behind (I missed the third), so I'm still playing catchup on the plot. But I picked up on what Silicon Valley was laying down pretty quickly, and I'm buying it. I'm pretty impressed with how the show has kept its character dynamics relatively faithful while moving them into new roles. Even though a lot has happened since I last checked in with the Pied Piper boys, I felt like I had just seen them recently.

That said, this episode was not my favorite. I did enjoy watching Dinesh's rise and extreme fall, but mostly because I know a bizarre amount about internet law — I saw the COPPA violation story coming early. I admire Silicon Valley for going with something so realistic, but that made the resolution to the story — that Gavin Belson acquires Piper Chat, thus absorbing its legal problems — feel way too pat. COPPA is no joke, and to introduce something like that only to have to be done with it by the end of the half-hour just made the episode unwieldy to me.

Still an entertaining watch, but I've seen this show be better.

MS: I do think the Gavin Belson acquisition is a bit of a cop-out, but in defense of the show, there's always been that seesaw of Pied Piper's fortunes. Anytime they get a big break, something catastrophic happens and vice versa, even going back to their TechCrunch competition in season 1. In the larger scope of the series as a whole, the Piper Chat screwup and solution falls in line with it.

There will probably come a point where the endless twists and turns becomes exhausting, but like fellow HBO comedy Veep, it hasn't shown any signs of slowing down.

Samhita Mukhopadhyay: I'm a pretty big fan of the show, but like Kevin, I am a season behind. I also found myself presently surprised at how it felt like the gang was back together. It's true that a bulk of the show has been a jerky back and forth with success one minute and impending doom the next, but this felt especially fast.

Dinesh's rise and fall was hilarious, but for the Belson acquisition to happen felt really rushed, and as you mention, an easy way out to a pretty serious storyline. They probably could have stretched that out over a few episodes and let Dinesh get super ridiculous before they brought him down. The fact that they didn't suggests there is much bigger stuff ahead and they needed to get rid of Piper Chat fast. Also, they couldn't possibly keep Richard at the sidelines for that long. Overall, not one of my favorite eps, but I'll probably keep watching it.

MS: I also have to ask whom everyone's favorite character is at this point. I'm immediately drawn to Jared; Zach Woods has perfected his awkwardness to the point that I'm convinced he's just like this in real life.

KO: Yeah, Jared, easily. He's the most distinctive character to me as far as tone — I could point to Erlich types on half a dozen shows without even leaving HBO. (Eastbound and Down is built on Erlichs.) But Jared's got such an adorably daffy vibe, largely provided by Zach Woods' really fun work on the show. I enjoy the scenes he's in so much more than those without him.

That said, I do love Richard, and I appreciate how he goes out of his way to help Dinesh despite Dinesh being a terrible person to him earlier in the episode. Silicon Valley doesn't usually feature characters being kind to each other in such a realistic way, and I appreciated this.

SM: I love Martin Starr because I've loved him forever, but my favorite is Richard. But because I'm kinda basic, Erlich makes me laugh the most. Jared just makes me feel awkward, and I want to give him a copy of Codependent No More. That said, I like that he was able to unhook himself from Richard. Dude is more together than we give him credit for!

MS: Agreed, Thomas Middleditch is excellent as Richard. It's a tough role; he's the center of the show, and the twitchy nature of his character means he's usually the butt of the best jokes instead of delivering the punchlines. Case in point: Season one's infamous "dick jerk algorithm" happened with everyone else, while he was alone in a hotel room working on his presentation.

I've only seen the first three episodes — and don't worry, I won't spoil anything! — but where do you think Silicon Valley is headed this season? I'm leaning toward Richard gaining some traction on the "new internet" idea and genuinely believing it's going to be his big hit, before coming down to Earth. It just doesn't feel like Silicon Valley as a show would reward such an absurd, ambitious goal.

Regardless, that won't take away from my enjoyment of the show. I prefer other comedies — FX's Atlanta is probably at the top — but I don't think any other series makes me laugh as consistently as Silicon Valley. So for that, I'm grateful.

SM: There is no question that the new internet is what's next.

KO: I think Richard is going to get remarkably close to his goal — like, right there — and then come crashing down to Earth. I'm not sure I could ever watch Silicon Valley week to week, because I do find its patterns somewhat frustrating. But it really is delightful, and I'm excited to watch more.