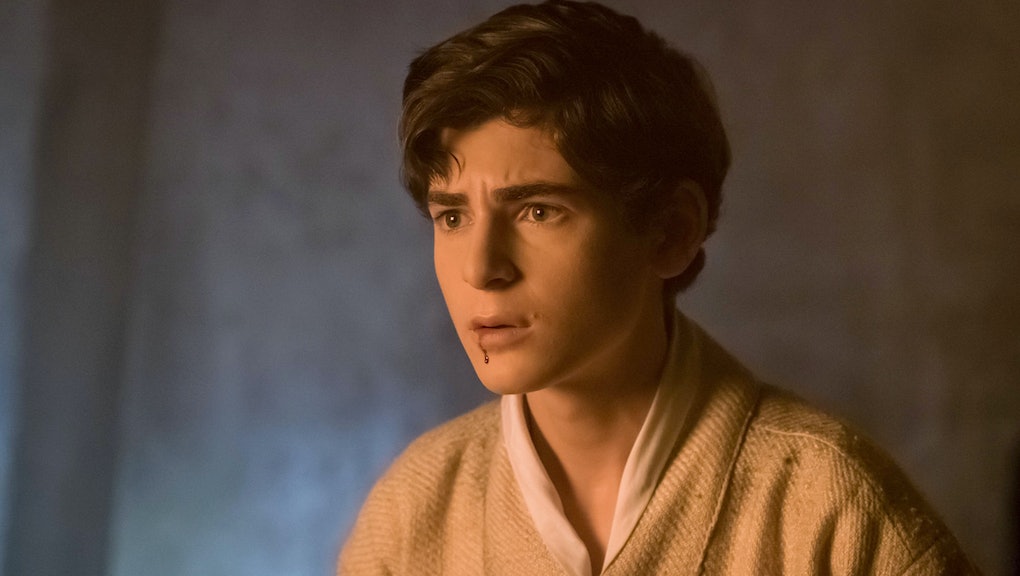 In the spring premiere of Gotham, the Court of Owls replaced Bruce Wayne with his clone and sent the real Bruce to a prison in the mountains (presumably Nanda Parbat). This is the largest step yet that Gotham has taken in bringing Bruce closer to becoming the man we all know he grows up to be: Batman. His journey is finally beginning.

(Editor's Note: Spoilers ahead for season three, episode 16 of Gotham.)

Episode 16 of Gotham began to further tease the Court of Owls' plans for the city, while also expanding upon what appears to be a growing friendship between Penguin and Poison Ivy. But the most interesting aspect of the episode is no doubt the few scenes we spend with Bruce Wayne in the mountains.

It is in this prison that Bruce first meets the Temple Shaman, played by Raymond J. Barry. This mysterious figure explains to Bruce that he will eventually return to Gotham, but not before he is ready. Of course, this doesn't stop Bruce from tying to escape with a bit more haste. He quickly learns, however, that his prison is a maze no easier to escape than one's mind (yeah, there are a lot of cryptic riddles in this one).

If Bruce's current predicament seems familiar, it is probably because you've seen something like it before. For an entire generation of fans, their knowledge of Bruce's transformation into Batman comes from Christopher Nolan's Batman Begins.

In that film, Bruce Wayne goes on a self-imposed exile from Gotham City while he learns to understand the criminal element. Along the way, he meets Ra's al Ghul (though he doesn't know it at the time), and it is with the mysterious leader of the League of Shadows that he completes his training.

Now, in Gotham, Bruce finds himself in a very similar situation. This time, though, his exile is far from voluntary. Still, it is in the far away mountains that he will begin his journey toward becoming Gotham City's protector. And for now, it looks like the Temple Shaman will be taking on the role of Ra's al Ghul.

This may, of course, only be for the time being, because Ra's al Ghul — played by Game of Thrones' Alexander Siddig — will be showing up soon.

A hint of Game of Thrones

There is, however, a reason for revisiting such painful memories: Bruce cannot become the man he is supposed to be if he remains clouded by pain. The whole situation is actually eerily similar to the most recent season of Game of Thrones, where the Three-Eyed Raven and Bran travel to different points in the past.

And much like the Three-Eyed Raven in Game of Thrones, the Temple Shaman is accompanying Bruce on these trips. The similarity to Game of Thrones is not necessarily a problem, just something interesting I observed. But it does seem to lack a bit of originality. It's probably safe to assume we won't be seeing any White Walkers in Gotham.

How does Ra's al Ghul fit in?

Though he hasn't appeared, or even been mentioned, yet, Ra's al Ghul is the most interesting part of Gotham right now. And that is because he connects to all that it is going on. Gotham executive producer John Stephens recently spoke with TV Guide regarding Ra's al Ghul's role in the season, explaining how exactly he fits into everything that has been happening.

"He's going to be the answer to a question that we begin to pose fairly early on when we get back, when we start to see these forces at work in Gotham," Stephens said. He went on:

With only six episodes left in Gotham's third season, it is safe to assume we will be seeing a good amount of Ra's al Ghul in the next few weeks. And that is something to get excited about.