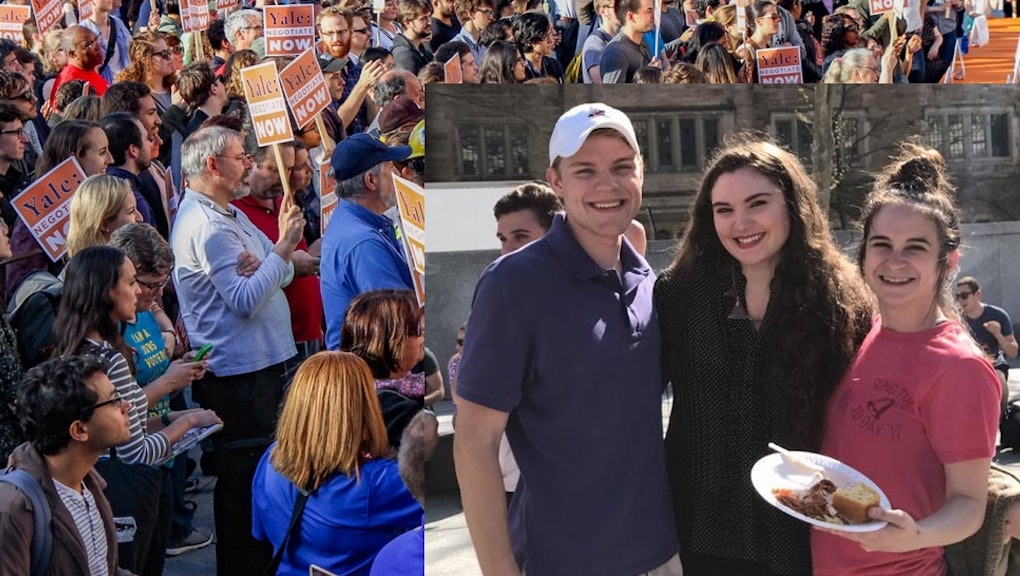 Most union-busting techniques are explicit, like legal challenges and anti-union campaigning. But when all else fails, go for the gut.

Yale University's local College Republicans chapter held a barbecue on Friday near the fasting site of campus union organizers participating in a hunger strike directed against the university. Bragging about the wafting, delicious smells on Facebook, it appears to have been a move to torment the fasting grad students, who have thus far gone days without food in a protest for their worker's rights struggle.

The tactic drew comparisons to another recent barbecue halfway across the world, where an Israeli youth group held a barbecue outside a prison in which Palestinians were engaging in a hunger strike.

The grad students at Yale have spent the past three years trying to get the union to sit down and negotiate a contract with its student workers — one that would provide adequate health care coverage, equal pay, a safer working environment for women and increased diversity initiatives.

Yale's administration has called the fast "unwarranted" and are calling the union vote into question with the National Labor Relations Board. But the union organizers say that Yale is just stalling until Trump has anti-labor NLRB appointees in place to rule against the grad students.

"The irony isn't lost on me that a bunch of guys were having a party wearing Trump shirts just 50 feet away from from the administration that's waiting for the Trump administration to bail them out," Charles Decker, one of the fasting grad students, said on Saturday.

Conservative media has tried to portray it as a false, "symbolic" hunger strike, claiming that the fasters are actually just eating when they get hungry. This distortion comes from the fact that they have standby fasters available in case the participating fasters experience a medical emergency.

The fast is real and nearing its hundredth hour for the original eight fasters, all of whom are still going without food.

"There are no breaks, and we don't eat when we're hungry," Decker said. "We're going to keep going until the administration comes to continue, or we can't continue for medical reasons."

"I assure you, we're very hungry."

We've reached out to Yale's College Republicans, and will update this story with more information as it's provided.