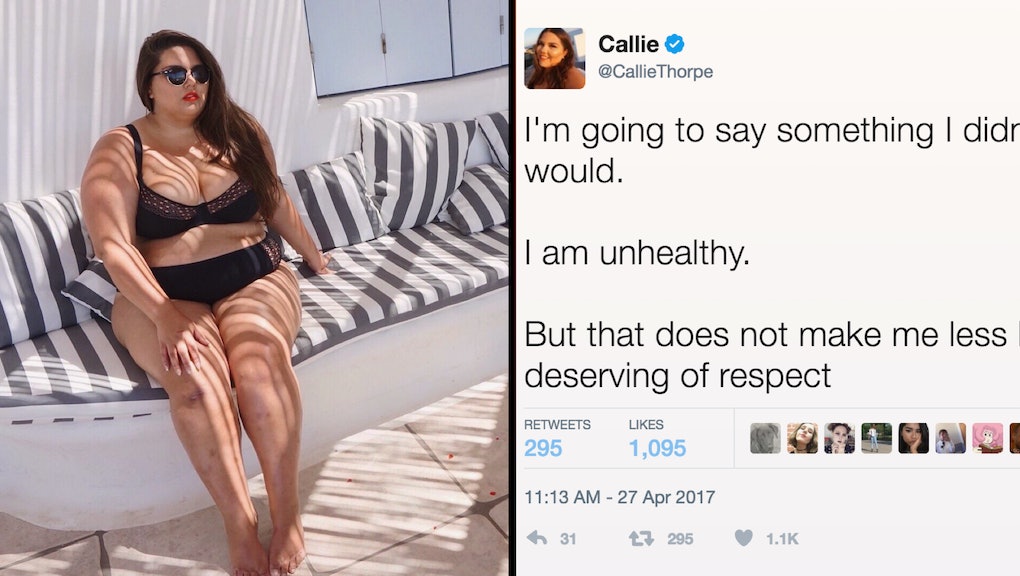 In one powerful tweetstorm, this woman demolishes the hypocrisy of fat shaming

In a just a few words, she nailed a big problem.

On Thursday, beauty and lifestyle blogger Callie Thorpe used Twitter to discuss the problem with people telling overweight people they are not healthy.

"I'm going to say something I didn't think I ever would," Thorpe said to open her tweetstorm. "I am unhealthy. But that does not make me less human, less deserving of respect."

She outlined unhealthy behaviors that many people participate in.

"I'd like to take a bet that you too are unhealthy, perhaps you drink too much, smoke, sunbath with no sunscreen, get too little sleep," she said. "That also makes you unhealthy. But because my body 'looks unhealthy' I'm the one that is mocked, bullied, made an example of."

Callie said that, even as she works on becoming healthier, she would never shame other people for their behaviors.

"Health is not a moral obligation, it doesn't make you better or more worthy than someone else," she said. "The reality is we will all die one day, it's inevitable, it's the one thing in life we know."

Lots of people reached out to Thorpe to say how much they appreciated her message.

Thorpe, who also runs a "body shame-free" style blog called From the Corners of the Curve, not only hit the nail on the head, but also sided with science. Though people treat obesity as a moral failure, scientists dispute that claim. Everything from gut bacteria to birth order may have an effect on a person's weight.

What's more, fat shaming a person may cause them to gain more weight and increase your own risk for heart disease.