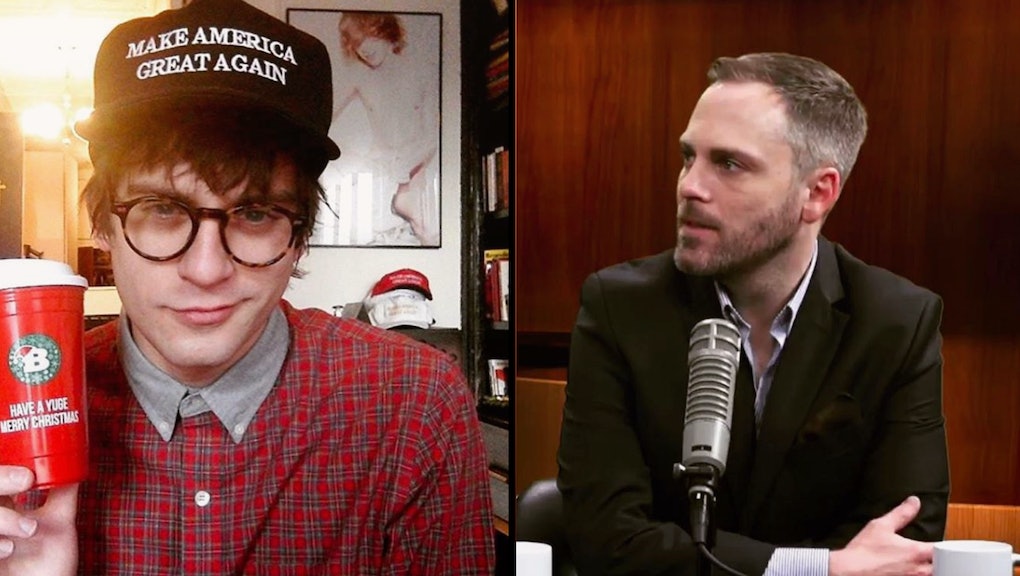 While speaking at a forum at the Metropolitan Republican Club in New York City on Thursday, two of the most notorious right-wing gay men made comments that mocked transgender women, while one of them ranted against the Islamic religion, BuzzFeed reports.

The forum, billed as an "all-star" panel representing the "new gay movement in the Republican party," apparently spent more time mocking the left than discussing policy. Two of the five all-white panelists were Lucian Wintrich, the White House press correspondent for alt-right clickbait blog Gateway Pundit, and Chadwick Moore, who gained notoriety after his profile of alt-right provocateur Milo Yiannopoulos in Out was widely panned.

Lucian Wintrich mocked White House LGBT liaison Raffi Freedman-Gurspan as an "unattractive tranny" while speaking and relayed — falsely — that the office had only been around for a few months.

"Begrudgingly, I'll say 'she,'" Wintrich said when speaking of Freedman-Gurspan. Though Wintrich claimed the office had only been around for a few months, the office has been around since former President Bill Clinton appointed someone to it in 1995, according to BuzzFeed.

Moore joined in to talk about trans issues, applauding Trump for lifting Obama's interpretation of Title IX, which allowed transgender students to use the public facilities that match their gender identity.

Moore called the original guidance "horrifying," claiming it "turned every bathroom and every locker room in the country gender-neutral."

He added, "It shouldn't be there. We're going have trans kids taking dumps in the streets? What were they doing before Obama did this?"

These two are not the only gay Republicans who have a controversial viewpoint on trans issues. Earlier this week, conservative gay Republican and president of Gays for Trump Peter Boykin tweeted that gays must not allow trans people to usurp the gay agenda, even though transgender people were on the front lines of the fight for LGBTQ equality.

Before the night was through, Wintrich also hurled grenades at the Islamic faith.

Wintrich is no stranger to controversy. A planned visit to NYU in February had to be postponed. While Wintrich blamed NYU's anti-fascist groups, NYU stated they didn't have enough security for the event, which was sponsored by NYU's College Republicans. Later in February, Mic reported that a new writer on Gateway Pundit had only written articles praising Wintrich, who is also a Pundit employee.