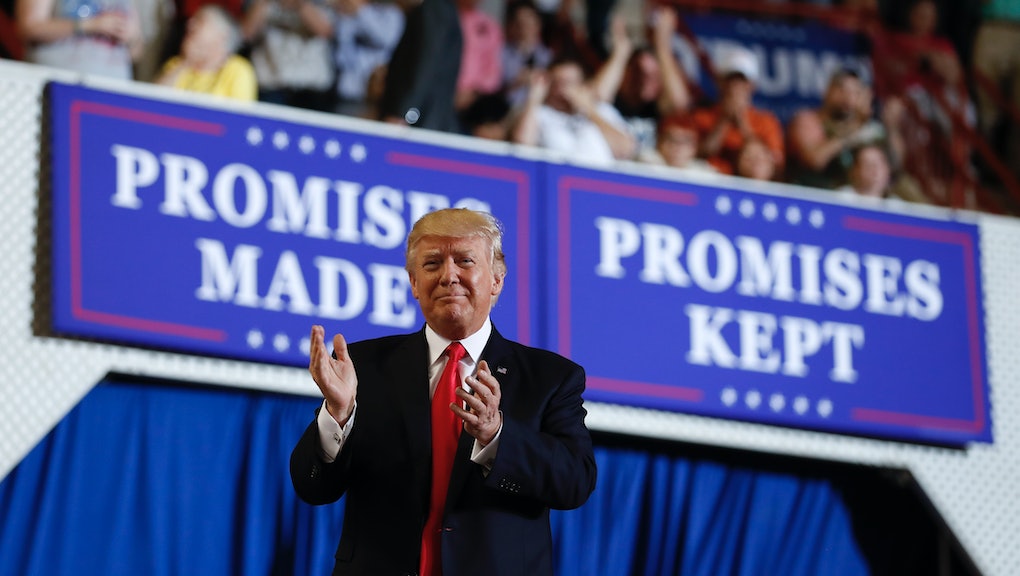 These Trump supporters are sticking with the president

HARRISBURG, Penn. — Don't tell these Donald Trump voters the campaign is over. The president's electoral victory nearly six months ago hasn't dulled the enthusiasm of his most passionate supporters.

An IT sales representative, Yavener knew Trump was his candidate when he looked into the camera at the first Republican presidential debate and said, "America is not winning anymore." Through all of Trump's ups and downs, including many broken promises in his first 100 days, Yavener has stuck with him since that moment in 2015.

The 26-year-old, sporting a Trump-red polo and "Make America Great Again" hat, drove two hours from Baltimore, Maryland, for Saturday night's rally. Yavener said he gave the Trump campaign a total of $1,000 — donating $5 whenever he could spare it — and frequently defends the president on Facebook. But Trump's rally touting his "promises kept" in the first 100 days of his administration was the first Trump event Yavener has attended in person.

It was not realistic to expect Trump to fulfill all his promises in his first 100 days, Yavener said, adding that those who say Trump has failed are missing the bigger picture. "They're focusing more on measurables," Yavener said. "The accomplishments of the first 100 days are intangibles."

In other words, among his most ardent supporters, what you can measure about the president's first 100 days in office doesn't matter. What matters is the direction Trump has steered the country — a direction supporters in line for his rally heartily endorse.

In interviews with Mic outside the Pennsylvania rally, Trump supporters said they largely approve of how the president has handled his first 100 days. Some said he charged too quickly into "fixing" the Affordable Care Act — an effort that flopped once and is on the cusp of failing a second time. Others believe Congress, including Republicans, shoulder most of the blame for stalling certain elements of Trump's agenda. But overall, Trump defenders said his direction is sound, even if some of his signature promises have yet to materialize.

"For the last 100 days, my administration has been delivering every single day for the great citizens of our country," Trump said at the rally. The president took credit for executive orders he claimed benefit American workers and the confirmation of Supreme Court Associate Justice Neil Gorsuch.

But Trump also returned to some of the talking points he espoused on the campaign trail — about crime, immigration and trade — to claim he inherited a country in crisis.

Pence echoed the president and promised to follow through on a variety of campaign promises. Some of them, like renegotiating trade deals, are in progress but far from completion. The president's supporters were quick to blame "the swamp" for blocking Trump's proposals, with many citing Gorsuch's confirmation as a major accomplishment of the administration.

Jake Devenney, a 21-year-old from Lancaster, Pennsylvania, said he was most proud of Gorsuch's confirmation.

A self-described "traditional Republican," Devenney explained he was initially skeptical of Trump, but has been pleased with the president's talking points on manufacturing. Devenney recently graduated from a trade school in his hometown, earning a debt-free two-year degree that led to a job as an electrical contractor.

"It's unrealistic for him to get rid of everyone who has been in D.C.," Devenney said of Trump's promise to "drain the swamp," as he smoked a cigar outside the rally.

There was no denying the rally's campaign vibe. Chants of "Lock her up!" and "Build that wall!" reverberated throughout the space, where Trump held a similarly packed rally last summer. During this event, Trump credited Pennsylvania for "carrying us to victory on Nov. 8."

At least a half-dozen protesters were escorted from the arena by police officers and men wearing "Bikers for Trump" T-shirts. One protester was detained for several minutes before he was ushered out by a Pennsylvania state trooper.

He attacked the "failing New York Times" and egged on the crowd as people chanted "CNN sucks!"

"We would all agree the media deserves a very, very big, fat failing grade" for the last 100 days, Trump said to cheers.

The mood was not all joyful outside Trump's rally, however. Lidia Kosyk showed up with a sign reading "President Trump, help save my job." Kosyk, 54, said she's worked as a pharmacist for the last 18 years at an Express Scripts location in Trevose, Pennsylvania. Her office is set to close, leaving all 220 of its employees without jobs.

"I did vote for him," Kosyk said. "American jobs are not being saved. Good-paying jobs are still being lost."