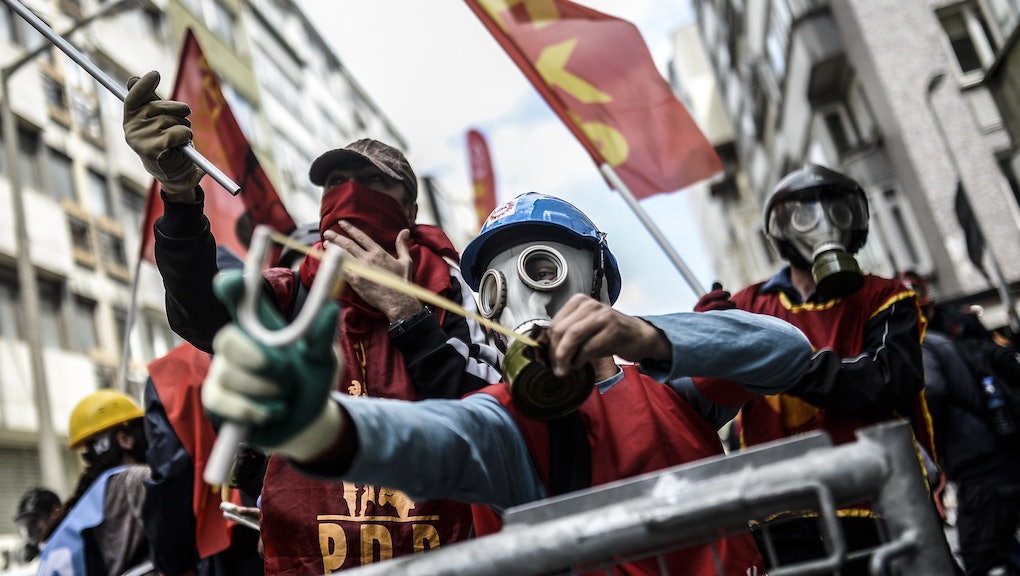 Today isn't "Loyalty Day," no matter what Trump says. It's something much bigger.

On Friday, President Donald Trump proclaimed May 1 to be Loyalty Day, a holiday for, in his words, "individual liberties" and "limited government." Some anti-Trumpers took this as some sort of authoritarian declaration of blind nationalism.

But Trump is only carrying out a 60-year tradition of celebrating May 1 as Loyalty Day. In fact, the holiday was never about patriotism — it was about burying the historic struggle for workers' rights.

Loyalty Day was officially declared in 1955 during the second Red Scare. The purpose was to overshadow May Day, the international workers' rights holiday that had been celebrated for half a century. In the eyes of conservatives at the time, unionization and the demand for workers solidarity in the face of capitalism was tantamount to a communistic threat to the nation.

In other words, Loyalty Day is meant to erase the workers' rights movement and rebrand anti-worker sentiment as patriotism.

America has a habit of erasing its pro-labor past. It's not just the internationally celebrated May Day, a holiday meant to commemorate the 1886 bombing of a Chicago labor protest that was blamed on the organizers and led to the hanging of four labor activists. International Women's Day, which is a massive day of protest across the world, was originally declared by the U.S.' Socialist Party to commemorate a strike by the International Ladies' Garment Workers' Union.

Around the world, May Day is still a day when workers band together to demand better pay, adequate benefits and the right to organize. In Turkey, where the protests are banned in Istanbul's main square, May Day still is regularly a violent day of struggle, and in Europe, it's a day when workers regularly clash with police over anti-labor laws. But despite the holiday's origins in the U.S., participation has declined owing to the collapse of organized labor and efforts to suppress the workers' rights movement — exactly what Loyalty Day is supposed to do.

This year, however, the United States is rejoining the world in honoring these days, just like it did with the strike on International Women's Day.

Workers are holding marches or strikes in nearly every major city in the country Monday, and Seattle is already expecting violence. Immigrant communities and unions will hold workers' rights demonstrations while a coalition of over 50 groups calling itself "the Majority" will hold workshops and teach-ins. While it's unclear if the unionization movement can return as a pillar of political power for progressives, the anti-Trump resistance is feeding the workers' rights movement with new energy.

Loyalty Day was created to bury a movement — a 60-year tradition, continued by Trump, to squelch labor organizing. On Monday, that movement is poised to again rear its head again.