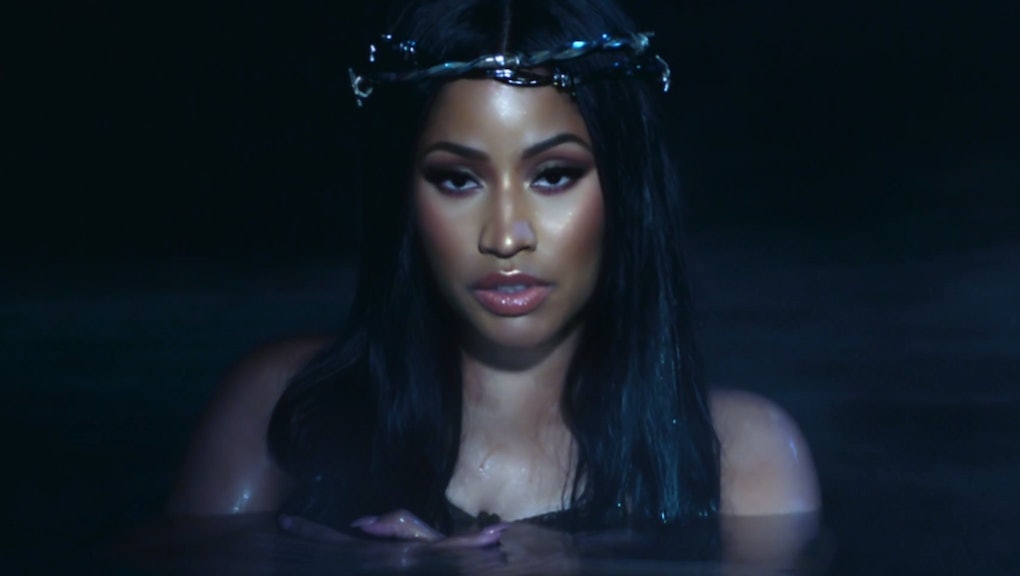 Nicki Minaj doesn't let herself get lost in memories of an old love in her latest visual for her rap-sung "Regret in Your Tears." The track was first released in March as part of a three-song bundle called "#3PackfromParis," and the video is exclusive to TIDAL. Watch a preview of the clip below.

The full video takes place in a rainforest and a bedroom that's flooding with water. There, Minaj reminisces on what was lost in her past relationship. As she remains cool, her love interest grows more and more distant from her as the video footage rolls.

Minaj's latest breakup track comes after the 34-year-old called things off with rapper Meek Mill in January. Their hip-hop love story ended after at least two years of dating. On the chorus of "Regret in Your Tears," Minaj sings, "I just wanted memories, tried to make some with you/ You/ Now I gotta erase some with you/ You."

Although Minaj doesn't have an official release date or title for her forthcoming studio album, there is definitely one in the works. "You know that little fire emoji in your phone? The album is that times a hundred billion, ca-trillion, gazillion," she said, teasing fans during an Instagram Live session Sunday. However, she didn't offer anymore details on it.

In the meantime, Minaj has been keeping busy as far as rolling out new material is concerned. In April, she released the music video for "No Frauds" featuring Drake and Lil Wayne. In March, she delivered a visual for "Make Love," her team-up with fellow rapper Gucci Mane.

In awards news, Minaj is up for a Billboard Chart Achievement Award this year. The Billboard Music awards airs May 21 at 8 p.m. Eastern on ABC.