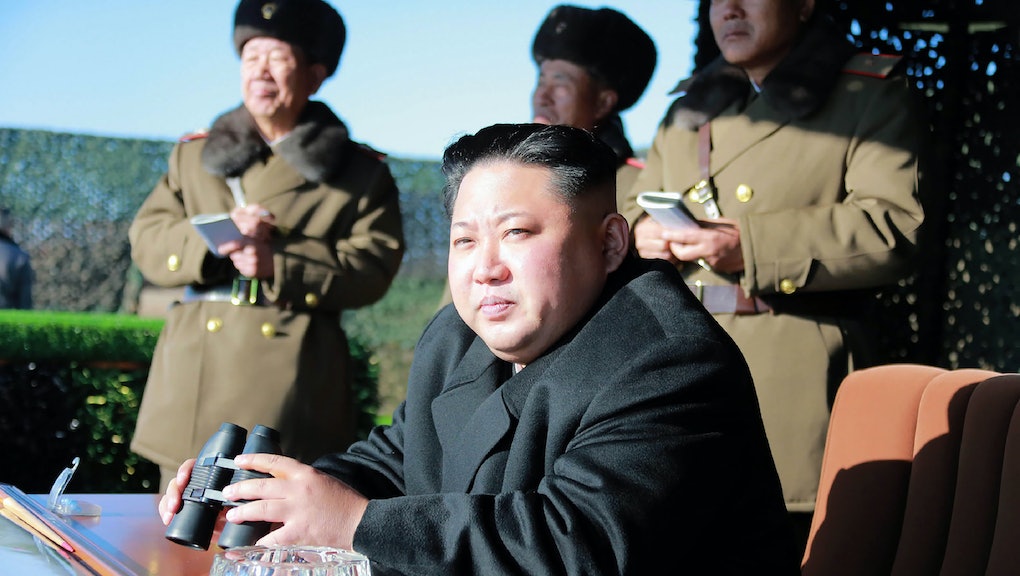 President Donald Trump told Bloomberg News on Monday he would be "honored" to meet with Kim Jong Un, the despotic ruler of North Korea.

"If it would be appropriate for me to meet with him, I would, absolutely. I would be honored to do it," Trump told the news agency. "If it's under the, again, under the right circumstances. But I would do that."

"Most political people would never say that, but I'm telling you under the right circumstances I would meet with him," Trump added. "We have breaking news."

Neither Trump nor Bloomberg clarified what Trump meant by "the right circumstances," but U.S.-North Korea relations have hit a low point, even by their normally tense standards.

Kim, who took power from his late father, the autocratic ruler Kim Jong Il in 2011, has aggressively continued the North Korean military's research and development of nuclear weapons, triggering bouts of military one-upmanship which have left much of the world fearing war on the Korean Peninsula.

But it's fairly safe to assume the North Korean government isn't itching to meet with Trump. Kim is known to be even more reclusive than his father; since assuming leadership of the country, Kim hasn't met with a foreign leader or left the country. Relations between the U.S. and North Korea have been tense since the U.S. killed up to 20% of the latter country's population with aerial bombing during the Korean War, which might explain why the only American Kim is known to have met with in any kind of formal capacity is former pro-basketball player Dennis Rodman.

While much about Kim remains unknown, North Korea is a totalitarian state, one of the most repressive in the world. Under Kim's rule, brutal purges involving torture, murder and labor camps have continued.

The last senior U.S. official to meet with North Korean leader was Secretary of State Madeleine Albright, who visited with Kim Jong Il in 2000 to discuss the country's nuclear program.