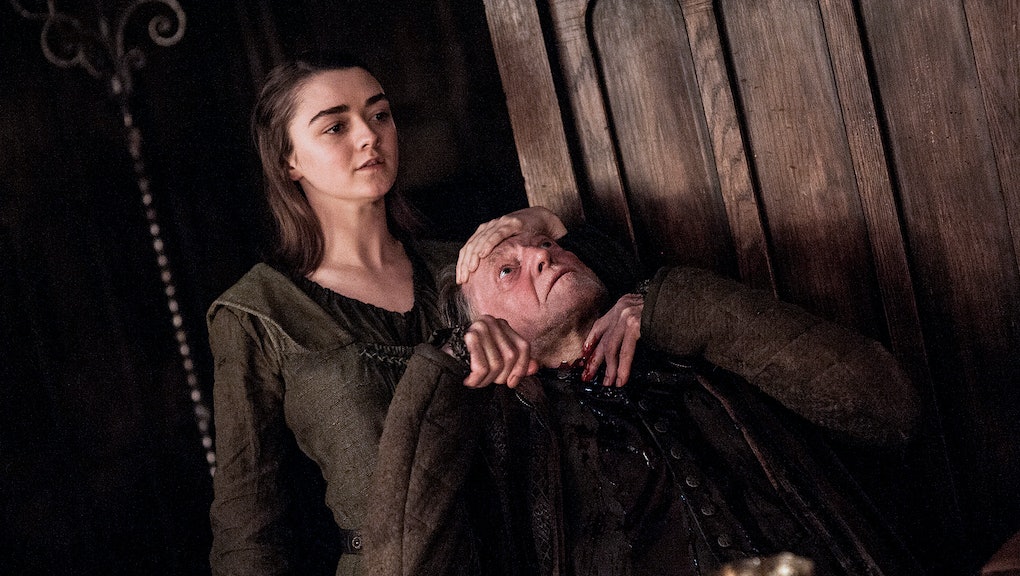 Who's on Arya's kill list? 7 'Game of Thrones' characters that could fall by her hand

One of the most satisfying moments in the season six finale of Game of Thrones had to be when (spoiler alert!) Arya Stark killed Walder Frey, the man who had her mother and brother murdered at the infamous Red Wedding. After two seasons of assassin training with the Faceless Men, her killing technique has become impeccable, if not a tad overdramatic (before killing Frey, she killed and baked two of his sons into a pie).

So who will be the next person on Arya's hit list to meet his or her demise? In order to figure that out, let's first go over who's already been crossed off.

Jaqen H'agar killed The Tickler and Amory Lorch at her request back in season 2. Both Joffrey Baratheon and Tywin Lannister also succumbed without Arya's help (Joffrey was poisoned by Olenna Tyrell, and Tywin was shot with a crossbow by his son Tyrion while on the toilet). And in the season five finale, Arya made Meryn Trant her first kill to avenge her sword-fighting master, Syrio Forel. And of course she took out Polliver in a tavern fight for killing Lommy as well as capturing her and stealing her sword, Needle, which she then reclaimed.

So here's who remains for potential Arya slaughter in seasons seven and eight. Disclaimer: she stopped reciting some of these later in the series, but there's a chance one or two could make a reappearance (namely Melisandre)

1. Cersei Lannister for her hand in Ned Stark's death (as well as many others)

2. Sir Ilyn Payne for carrying out her father's execution (no longer named)

3. Gregor "the Mountain" Clegane for torturing prisoners at Harrenhal

5. Beric Dondarrion for selling Gendry to Melisandre (no longer named)

6. Thoros of Myr for the same offense (no longer named)

7. Sandor "the Hound" Clegane for killing Mycah, although she did say aloud she no longer wanted him to die, and thought she left him for dead in season six.

While it's unclear who Arya will go after first in season seven, Maisie Williams, the actress who portrays her, has some thoughts:

"If I had to put them in order of who she wants dead the most — just three of them — it would probably go Cersei, Melisandre, then the Mountain or Ilyn Payne — they're on par with each other," Time reported she said in an interview with Entertainment Weekly.

That makes sense considering the severity of their crimes versus the other remaining three. However, in terms of who she might encounter first, that order could shift.

How those three could play out

At the end of season six, Arya finished killing Walder Frey at the Twins in the Riverlands, which are fairly close to Winterfell. Meanwhile, Melisandre is heading south away from Winterfell. As such, the chances of them crossing paths (especially given the fateful significance of such a meeting) are high, so the Red Woman will likely be Arya's next victim.

And while there is a popular fan theory that Jaime ends up being the one to take out his sister/lover Cersei, the more poetically just path would be to let Arya have the pleasure. It would likely be during Daenerys' invasion, with Arya perhaps posing as a handmaid keeping Cersei company while her world burns down around her.

The mountain will be a tricky one given he's now a reanimated monster, but like all monsters, he must have a small fatal flaw that clever Arya will no doubt figure out. She would likely need to remove him first before she can hope to reach Queen Cersei.

Last but not least on Arya's priority hit list we have Ilyn Payne, the man responsible for removing her father's head. Payne's future on the show's a bit tricky to predict currently, because the actor who plays him, Wilko Johnson, has been sick with pancreatic cancer. Reports say his health is improving, but there's no news yet on whether or not he'll be returning to the show, or if the part's been recast.

If the character does return, since he was acting under orders, his death will most likely be lackluster, and may happen as Arya is on her way to kill someone more significant to her, like Queen Cersei. Since Arya is all about eye-for-an-eye justice, she'll likely find a way to cut off his head like he did her father's all those years ago. Time to start practicing with a larger sword, Miss Stark.

It's tough to say exactly when these deaths will occur, but if Arya's the one to achieve them, Cersei, the Mountain and Ilyn will likely happen within the same short span of time. Their proximity to each other in King's Landing makes them easy targets for one revenge-minded young woman.

Considering how much turmoil the city is currently in, these three villains losing their lives in the upcoming season at the hands of Arya seems like a safe bet.