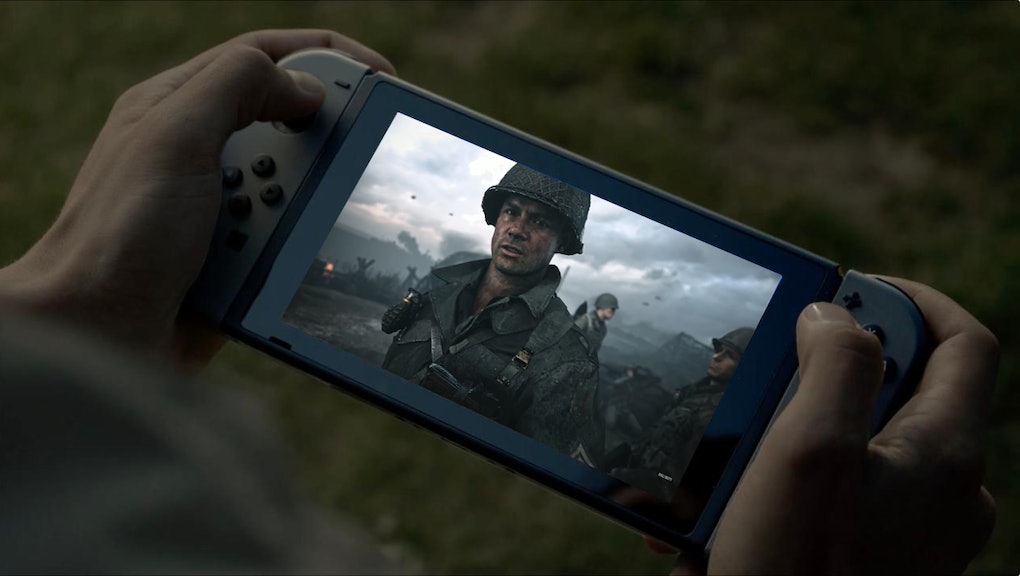 'Call of Duty: WW2' Nintendo Switch: Will Activision bring its series to the portable console?

Call of Duty: WW2 has been announced for PlayStation 4, Xbox One and PC, but for now the fate of the game on the Nintendo Switch is up in the air. At the reveal event, Activision failed to mention any support for the new Nintendo system, suggesting that the console won't be getting a Call of Duty release.

However, declining to mention a Switch version isn't the same as actually stating that the title won't be coming out for it at all. There are some good reasons why Activision would want to bring Call of Duty: WW2 to the console, and some historical precedence for the series releasing on Nintendo hardware. Below we've listed the pros and cons of a Nintendo Switch version of Call of Duty: WW2.

Call of Duty: WW2 Switch: Reasons why Activision may bring the series to the Nintendo Switch

Activision has released Call of Duty on Nintendo platforms before. The Wii U saw versions of both Call of Duty: Black Ops 2 and Call of Duty: Ghosts, which is significant because they were released during a time when many third-party publishers were turning their backs on Nintendo's home console due to lack of sales.

With the Nintendo Switch selling 2.74 million units in its first month and promising to sell even more when Nintendo has more stock available, Activision would be missing out on a large market of gamers. Furthermore, Switch players have the option of taking their gaming on the go in Portable Mode, which would allow Activision to experiment with new ways of play that could make the Switch version popular in its own right instead of being just a port.

Call of Duty: WW2 Switch: Why the game may not make it to Nintendo's console

One aspect of the Switch's design stands above all other reasons that Call of Duty: WW2 may not come out for the system: its relatively low processing power. Compared to the PlayStation 4 and Xbox One, its rivals in console gaming, the Nintendo Switch can't compete when it comes to raw power. Instead, Nintendo has adopted a strategy of versatility and excellent first-party hardware to push Switch sales.

Unfortunately, the Switch may not be capable of running Call of Duty: WW2 without extensively reworking huge parts of the game. Nintendo's console uses ARM architecture for its processor, while Xbox One, PS4 and PC rely on x86-64 architecture instead. The game's textures and models might also need to be modified to a lower fidelity to run on the Switch.

There's still a long wait before Call of Duty: WW2 releases on November 3. Call of Duty is one of the most popular franchises in video gaming, so as long as Nintendo Switch ownership continues to grow, more than likely Activision will find some way to capitalize. We'll know more about the status of Call of Duty: WW2 in the coming months.