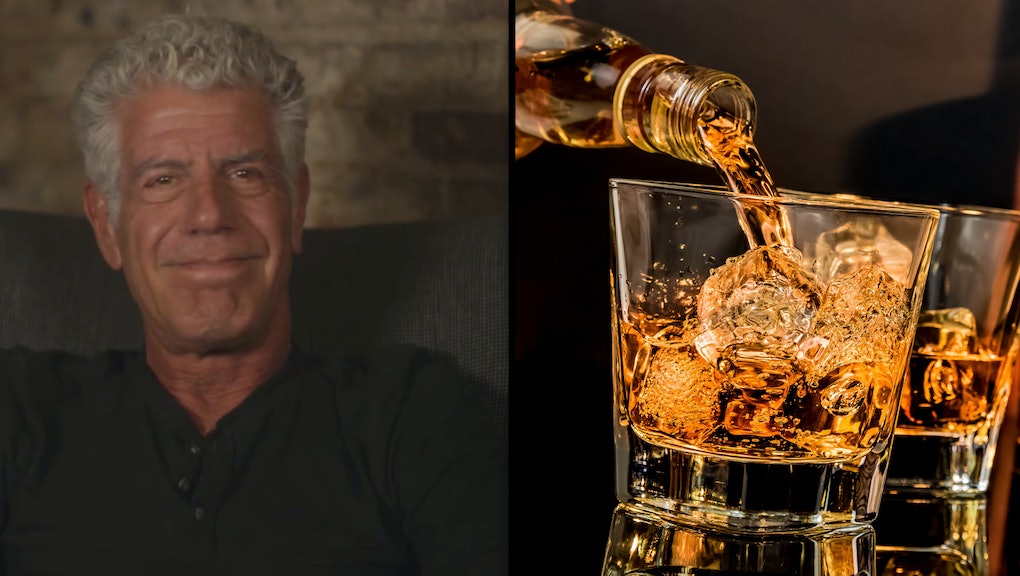 Whiskey has long had a reputation as a "man's drink."

"If you're looking for a drink to really put hair on your chest, drink whiskey straight and you'll understand what it means to be a man," the oh-so-suitably named website Rugged Fellows Guide advises. "Not much more to be said about the flagship drink of manliness other than that it's king of the manly drinks."

But despite this reputation, every two out of five bourbon drinkers is a lady, according to a 2015 story published in Forbes. That's 40% of the population, and a figure that other experts agree is true of whiskey in general.

Indeed, at least one top name in food agrees that the dark liquor isn't just for boys: "I frankly don't like the idea of assigning gender to food," celebrity chef Anthony Bourdain said in an interview on April 18, where he hosted the Balvenie and American Craft Council's 2017 Rare Craft Fellowship Awards. "It really offends me."

While Bourdain may portray a rugged, maybe even stereotypically "dude-ish" personality on his show Parts Unknown, being an aspirational kind of guy's guy is not his intention. "If I'm in any way responsible or seen as supportive of 'bro cuisine' I mean, it makes me just want to hang myself in the shower thinking about it," he said.

Perhaps a little dramatic, but his point is made: Good food and drink can be enjoyed by everyone. And yet, marketers continue to insist otherwise.

How does a drink, like whiskey or beer, become gendered in the first place? "... we're constantly bombarded with advertising and social messaging telling us that eating like a bird and dining on salad is feminine, while eating large portions and plenty of red meat is manly," Christine Brissette wrote in the Washington Post. "These oversimplified representations of female and male eating habits may seem outdated, but research shows they persist for many of us."

Indeed, this kind of messaging is all around us. Take products like Brosé (rosé for bros), Powerful Yogurt (it's got a bull logo) and Skinny Cow for Him (truly a thing that exists), all of which take food products that are typically marketed to women and give them a masculine makeover. More than anything, it's the items' presentation that depicts who should be consuming it — there's nothing listed in the ingredients that make them better for men.

So even though women have proven their interest in harder liquids like whiskey and beer (they were, after all, the original brewers), sale and celebration of these drinks are consistently, pitifully aimed at men. Women make up 50% of the population, so if marketers intend to keep their ad dollars flowing in this direction, well, it's really their money to lose, now, isn't it?

Whiskey's depiction in the media

Whiskey experienced a renaissance in the past decade or so, with shows like Mad Men glorifying the drink as a kind of panacea, mostly for high-power men. "Sales of rye whiskey [Don's drink of choice] grew 34% in 2013 alone and 500% over the past five years, according to the Distilled Spirits Council of the United States," the Daily Beast reported in 2014.

"The idea of a bunch of high-fiving white guys with ties and their jackets off talking about scotch — that's not the way to enjoy a fine whiskey to me." — Anthony Bourdain

And while it was near-romantic to watch Don Draper and his subordinates throw back a stiff one, in today's modern age, Bourdain says there's nothing more unsightly. "The idea of a bunch of high-fiving white guys with ties and their jackets off talking about scotch — that's not the way to enjoy a fine whiskey to me."

"I frankly don't like the idea of organized appreciation festivities — people sitting around doing tasting notes for beer would be ... an eternity in hell," Bourdain continued. This all plays into what Bourdain calls the "douche economy," a concept where we buy into things we consider to be high-class or elevated, but are usually just gussied-up with a fancy name to earn a higher mark-up (think kobe beef sliders and truffle fries).

How to drink whiskey, by Anthony Bourdain

So if not with the boys in a sweated-through oxford after a long day on the job, what is the proper way to sip a glass of scotch? Bourdain said it's a drink "best enjoyed alone." And he gets more specific:

"Four o'clock in the afternoon, in a saloon or pub of my choice, in the dying light of the afternoon, dust motes floating in the air, Tom Waits on the juke box, and after a few sips [...] free to feel as good or bad about myself as I care to that afternoon."

You can watch Bourdain's full interview with Mic in the clip below.