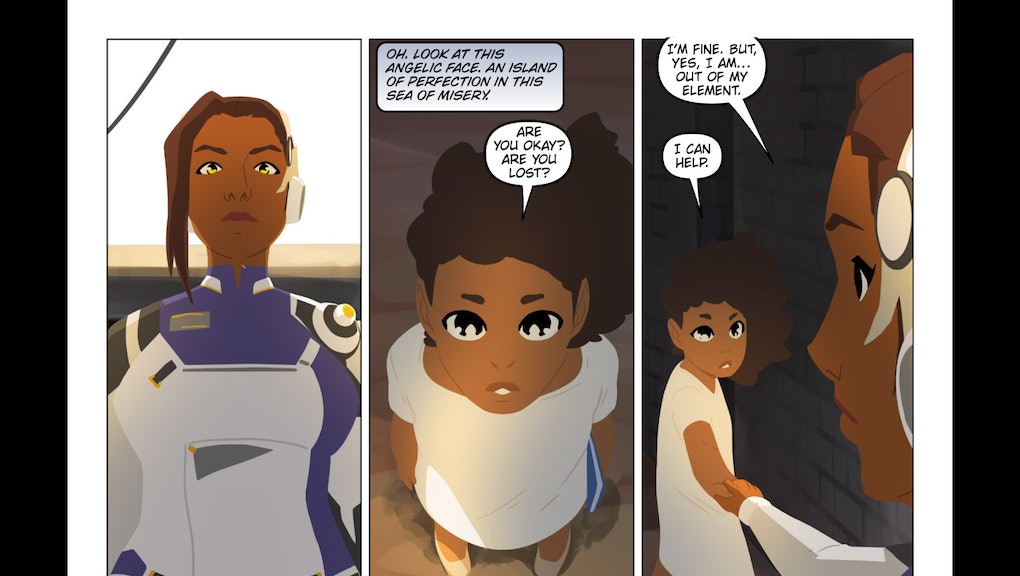 In March, Overwatch fans found something surprising in the Numbani map's staging area, where players wait until the match begins. The typically pristine airport setting had become a warzone overnight. No explanation had been given. But all would be made clear with a new character reveal and rich backstory told outside of official gameplay.

There are two distinct Overwatch experiences. One is fueled by a love of the game's solid shooter mechanics, a laudable achievement from a company previously committed to strategy and role-playing games. The other is powered by the moments in between matches, the stories that are told about the characters outside of the game's limited narrative structure.

To many fans, Overwatch isn't just about what or how you play — it's about the colorful stories being told behind the scenes. Blizzard's done an incredible job of injecting fascinating stories into a game without any sort of traditional campaign mode, setting a new standard for the entire industry to follow.

Overwatch and the power of subtle storytelling

There's always been a subtlety to the way that Overwatch approaches its narrative. Right from the beginning, Blizzard was careful not to reveal too much too soon. When the announcement trailer dropped during BlizzCon 2014, it was hard not to immediately fall in love with Overwatch's charm. So much about the game's cast of characters was mysterious, left to the imagination and the promise of more. Just a taste.

One of Overwatch's many strengths is how expertly the story is teased out. There's no single player campaign to explore. There are no story-specific modes, outside of special events like Uprising and Halloween Terror.

Blizzard has crafted some of the best stories in gaming. So it's no big surprise that Overwatch had narrative bubbling up around the edges. We just didn't expect to see it surface offline through a mixture of animated shorts, online comics and subtle voice lines.

Bungie tried something similar with Destiny before rolling out the Taken King expansion, opting to get out of its own way and make room for faster gameplay. Unfortunately, in this case, it didn't really work.

By hiding its story in Grimoire cards, Bungie created a fractured, disjointed game that didn't make a whole lot of sense. Destiny's implicit storytelling failed because the game needed an explicit narrative to convince you it's worth grinding through the "Prison of Elders" for hours on end. When the Taken King expansion came out nearly two years after the original beta, it introduced explicit storytelling — and ditched the Dinklebot — bringing back the Bungie spark that had been missing all along.

How Overwatch gets it right

Where Bungie stumbled, Blizzard excels. That's particularly impressive when it comes to Overwatch, a totally new franchise that couldn't rely on brand familiarity to succeed.

There's nowhere to hide when you're crafting a brand-new world — it lives and dies on its own. Instead of ignoring story entirely, Overwatch leaned heavy on the one thing that everyone knows Blizzard does well: cinematics.

The animated shorts that Blizzard trickled out over the course of five months were part marketing campaign, part implicit storytelling. Blizzard was looking to create awareness around its shiny new game, but by doing so with such narrative aplomb it got a growing fanbase to care about the characters too.

Without those animated shorts, Overwatch's active fanbase would likely be drowning in droves of first-person-shooter bros, instead of thriving as the diverse community it has come to be. The cinematics also appeared on the Battle.net client, winking to players as they logged in to play the game. It seemed like every time an Overwatch animated short would debut, the internet would temporarily catch on fire.

Then came the comics, free via Blizzard's site and third-party apps. The comics — 12 available as of this writing — have given us glimpses into what makes the individual characters tick beyond their roles in the game. Through a medium that has often struggled with diversity, Overwatch fans were reminded of the importance of representation. Symmetra made reference to her being on the autism spectrum. Tracer came out as a lesbian, with her adorable Christmas vignette in issue 10.

These short stories and vignettes do more than just tell the stories of your favorite Overwatch characters. They create an empathetic connection between the characters and the players. While team composition is of utmost importance during a game, it doesn't drive 'ships, fan art or cosplay.

Bungie learned some hard lessons through previous failed attempts at implicit storytelling in Destiny. By backfilling the universe with exposition and important narrative beats, the company had to grasp at a portion of a player base that had abandoned the game long before it made sense.

By contrast, Blizzard has systematically revealed the stories in Overwatch a little at a time, with delightful bite-sized teasers. Unlike Destiny's scramble to frame its universe in a way that made sense to players, Overwatch's offline stories are a slow and tantalizing reveal.

Players don't need to understand the complexity of the characters in order to have a good time playing the game. But as fans, we're always thirsty for more information about our favorite characters and the world in which they inhabit.

As a Blizzard game, Overwatch had a better chance than most at nailing narrative right out of the gate. The attention paid to smaller experiences both in the game and through supplemental media is a major part of why Overwatch has become a bastion of subtle storytelling and meta-experiences.