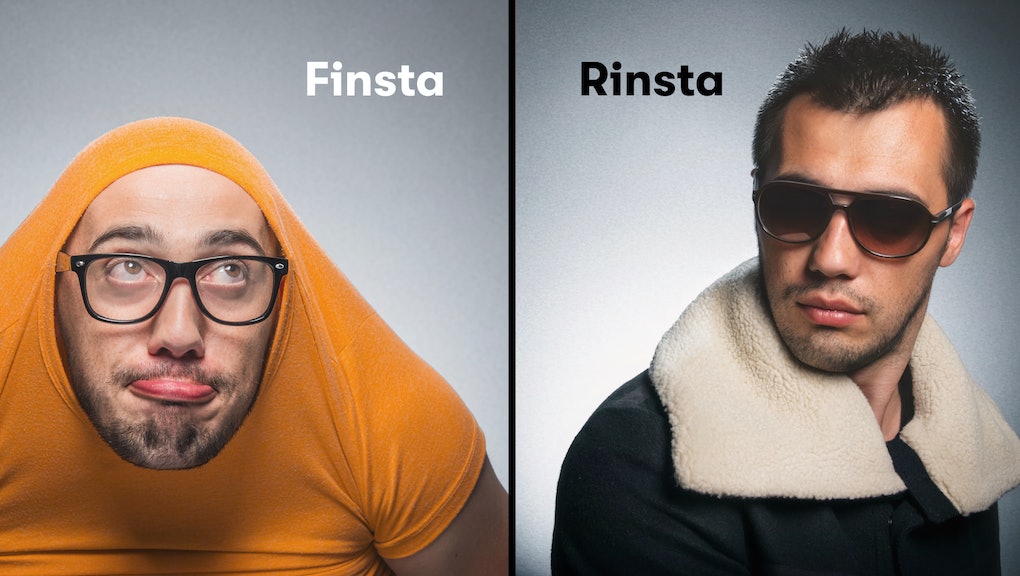 If you ask anyone under the age of 21 where they post most frequently on Instagram, chances are they'll tell you it's to their finsta.

Finsta stands for "fake instagram." It's a separate, locked account with a nonsensical name that teens use to share everything from bad selfies, emotional rants, funny memes, screenshots of texts, homework help and more to a small, select group of friends.

Unlike a teen's "real instagram" or "rinsta," where their image is carefully curated for public consumption, finsta is intimate and messy and, according to every teen we spoke to, way more authentic than their main profile.

The good, the bad and the ugly

Esther Choi, a 17-year-old in Suwanee, Georgia, says that she only posts "the best parts and the big, good parts of my life," on her rinsta. "It's not the full picture."

Finsta is where she gets real.

"On my finsta, it's the good, the bad and the ugly. It's a more multifaceted version of me," she says.

For instance, Choi says that when she goes to a concert she'll generally post a single photo of the show to her rinsta, but finsta is where she posts screenshots of the song lyrics with deep analysis of what they mean to her in the caption.

"You're the same person on both, just one is way more personal than the other," she said.

"It's almost like, if you're a political candidate, your rinsta would be your platform page, where you post the best version of yourself."

Two apps in one

Why did these accounts start cropping up? Most teens we spoke to said finsta was a backlash against the overly curated image you're expected to portray on social media.

They said that they wanted to keep their main insta accounts for casual followers, teachers or parents who like to keep up with their life, but they also wanted a space to vent and chat and get real with their friends.

Group chats and Instagram Direct don't work for this because everyone would have to be following each other.

"My main account is what I use when I meet new people," said Isabel Mitchell, a 17-year-old in Belmont, California. "Like if I meet someone at a friend's house and I'm like, 'Oh what's your Insta?' That's where you keep acquaintances, mutual friends and general friends. My finsta I only allow really close friends to follow."

Most of the people we spoke to had around 1,000 followers on their main Instagram accounts, but only between 20 and 100 on their finsta.

"My rule of thumb is if I would have a convo about something serious in real life, I'd let them follow my finsta," said Andy Wang, a 16-year-old from Naperville, Illinois.

"I think the reason it's popular is because most people are thinking about applying to college and jobs," Mitchell said. "Parents always say, 'Watch what you're posting.' Finsta is kind of like a loophole."

"I think nowadays students and teens have become so aware that what they're posting publicly on social media is going to be viewed by colleges and employers. So that's why they keep a finsta," said Chaze Vinci, a 16-year-old from Franklin, Kentucky.

Yet that trust can sometimes be betrayed.

"One of my friends started complaining about her orchestra director on finsta," Vinci said. "She started talking about how that class sucked the life out of her and how she hated it so much. Someone who was following her screenshotted and sent to the school's administration. She ended up getting suspended from orchestra for a week."

However, betrayal of trust is rare. Most teens keep a tight lid on who is allowed to follow them and cull their numbers regularly.

When asked why they didn't post rants or more sensitive emotional content to more ephemeral platforms like Snapchat or Instagram Stories, many said that they wanted the intimate record of their life that finsta provides.

"I think young people have a need to journal and want to document parts of their life that isn't always for public view," said Maris Bock, a 19-year-old from Viroqua, Wisconsin. "You want to be able to look back on that stuff."

"I like finsta because I still want a record of the funny stuff that happened to me, or even just a great dog I saw on campus, without it like, contributing to the 'vision' of Alice Wilder that exists on the internet in a public way," said Alice Wilder, a 21-year-old from Chapel Hill, North Carolina.

"Even now, I look through my finsta from when I was a senior in high school, and I'm like, 'Oh, this is selfie I took before I had a college interview. I remember picking out that outfit.' It's nice to have those little moments captured. I want to have that so I can remember," she said.

Rinsta is the real finsta

The terms rinsta and finsta are both sort of misnomers. Finsta pics are a lot more "real" than anything posted on people's rinsta or "real" Instagram.

Hannah Hooper, a 19-year-old from Little Rock, Arkansas, is leading the charge to swap the two terms or at least merge more finsta into Insta. "I actually made the hashtag #BringFinstaToRinsta," she said.

"It's just all backward because we call our 'fake Instagram' our finsta, but in reality the finsta is a more real representation of who we are," she said.

"It's just all backwards because we call our 'fake Instagram' our finsta, but in reality the finsta is a more real representation of who we are."

Hooper says that she's made a concerted effort to post more finsta-type content to her rinsta and has, so far, seen a positive return. "I've gotten way more likes than I expected," she said.

But while likes matter a lot on a rinsta, part of what is so freeing about finsta is that it's not a numbers game. You know your best friends are all there and they'll always come through.

"I don't think finstas will go away," he said. "It's not a hard thing to maintain. I have a Facebook, Twitter, main Instagram account, Snapchat and finsta. I have them all for different reasons. I think finsta is useful because it separates Instagram into two very useful social networks in one app."

"It's like a journal entry," Wilder said. "I know old people had LiveJournals, so maybe it's like that."