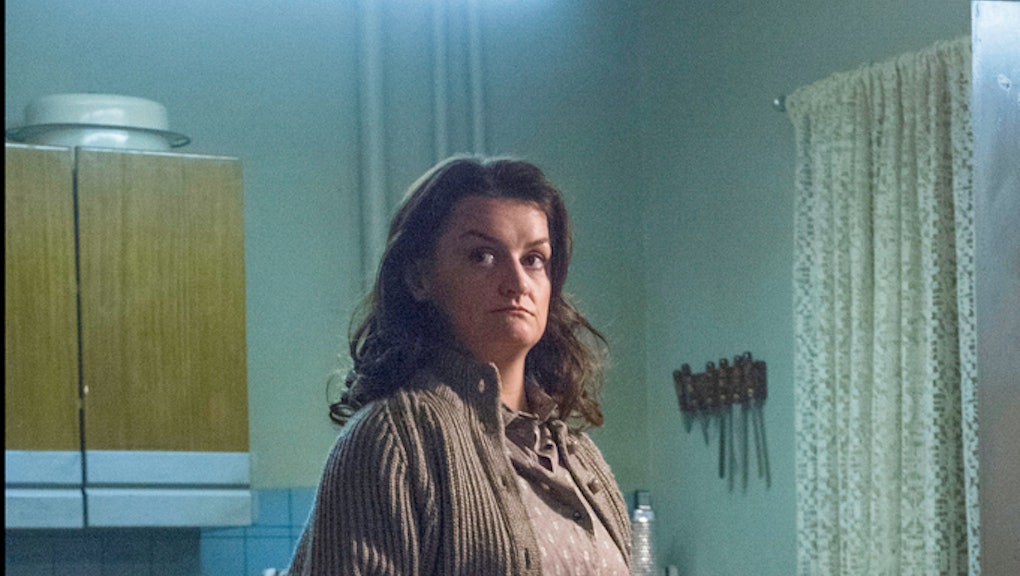 Six episodes after her one-off, dialogue-less cameo in a Moscow grocery store, fan favorite Martha Hanson returned to The Americans on Tuesday.

The episode was chock-full of drama. Henry announced he wants to go to an elite boarding school; Tuan was caught engaging in non-KGB-approved undercover activities; Frank Gaad's widow basically told Stan to avenge her husband's death; and we were even treated to a Kimmy sighting. But none of those storylines could compare to the moment so many viewers have been waiting for: a deeper glimpse into Martha's new Soviet life.

However, before fans get excited that this is the be-all and end-all of Martha's existence, remember it's just a snapshot. Judging from the scene alone, it's easy to walk away from it and say, "Martha's miserable." But according to portrayer Alison Wright, who spoke with Mic about getting back into her Americans character after some time away — she appeared on FX's limited series Feud and is currently starring in the Pulitzer Prize-winning Sweat on Broadway — Martha's new life is still open to interpretation.

"What I liked about what we see in this episode is that it's not that clear to me who or what she is now and how she feels about herself, her world, her predicament," Wright said. "It's still a little of an enigma, which I really like. It's not cut and dry, because life isn't [that way] and her situation is certainly extremely complicated. So it's a real interesting little look that we get at her in this panicked moment."

Other than the aforementioned food-shopping appearance, Philip Jennings' burned asset has not been seen on the show since she was put on a plane in season four's eighth episode. Needless to say, this was a very different Martha than the sweet, borderline-naïve FBI secretary audiences grew to love over the years.

Gabriel, who kept his word about returning home, paid Martha a visit at her drab Soviet apartment — or "Moscow hovel," to use Wright's description — in Tuesday's episode. During their brief conversation, we learn the onetime U.S. government employee has become a lonely, hardened woman, with not much else to look forward to other than a translator job at a newspaper or publisher once she masters Russian.

Speaking of Russian, audiences were treated to a taste of how Martha's language lessons have been progressing. Although one of her few regular human interactions is with a Russian instructor, Martha is still struggling with the language, which is ironic given the fact Wright said she can speak Russian better than Martha.

"I actually took, like, a year of Russian about five years ago," Wright told Mic.  "My boyfriend at the time was from Kiev, so I was pretty excited. I was like, 'Bring it on, I think I got this!'"

Much to Wright's disappointment, however, Martha only had two lines in Russian. "I was like, 'I can do more complicated stuff than this! Let me count from one to 20 and show off!'"

But her scene wasn't about demonstrating Martha's Russian prowess. It was more to show how much the character has changed in the nine or so months since she was exfiltrated to the Soviet Union. When Gabriel shows up unannounced, with little else except phony platitudes about how much Philip thinks about her, we see a much tougher side of Martha.

However, that's not necessarily a bad thing. After all, as Wright said, "Everything has to have a cost. If something doesn't have a cost, where's the value of the story, or the experience? We don't want her to be walking through life being the same person that she was and not having learned anything from this whole thing. We want her to be changed and rebuild her, hopefully, stronger."

She may not be the same Martha fans once knew, but her depressing existence aside, this character has grown a backbone and given viewers hope she will survive her ordeal — even if it takes seven years until the fall of the Soviet Union.

"I saw this great piece of art on the street the other day that I put on Instagram that said, 'Break your heart, find your spine,'" Wright said. "It's kind of like that. That's kind of what's happened. She's just got herself right now. She's got nobody else and she's not a doormat, and she's found a strength and a resolve. She's surviving and she's getting on with it. I really loved that sentiment, and I think it really applies to Martha in this situation. [It's] what happens to people when they're steamrolled over, when they're devastated and their heart is broken."

When Gabriel tries to appease her with bogus claims about how much Philip — aka "Clark," the pseudonym he used with Martha — cares about her, Martha calls the veteran KGB agent on his bullshit. Considering everything she's been through, it's not only a refreshing moment, but one of real strength.

"It's still amazing to me that she didn't just kill herself, like the majority of the statistics of the women that this happened to," Wright said. "She's survived so far, but we really don't see that much. All we see is this glimpse, this little conversation. We really don't see that much of what her day-to-day reality is. We're just seeing how she's behaving in that moment with Gabriel walking through her door. She's a little bit on the defensive, but she has enough resolve to let him know how disgusted in him she is."

"[So] it's pretty great that she didn't fall apart," Wright continued. "Just the insult of him bringing up Clark and trying to tell her that he's been thinking about her. I think that's the last thing she wanted to hear. And that enabled her, really, to tell him where to get off. It's just insult to injury, so I liked that."

Since Wright isn't offering any clues as to whether this was Martha's final Americans appearance — "No comment!" — the only breadcrumbs she's willing to leave us with are a few thoughts on her character's preferred choice of companion these days.

Although Martha's exchange with Gabriel included a couple of lines of dialogue that hinted at the KGB's attempts to marry her off, Wright isn't so sure that's in the character's best interest right now. "I don't think anybody would want to see Martha falling for another guy at this point," Wright said.

That still doesn't mean Martha deserves to be alone, right? "She ought to get a puppy, that's what she should do," Wright suggested.