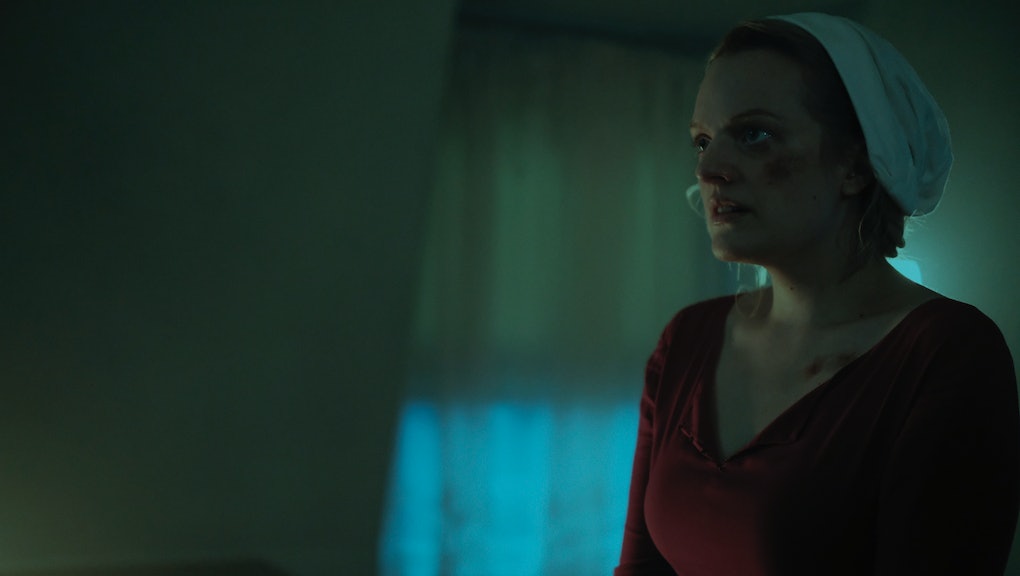 'The Handmaid's Tale' Season 1, Episode 4 Recap: Don't let the bastards grind you down

In Mic's TV Club, senior arts writer Kevin O'Keeffe and arts writer Miles Surrey will watch an episode of a TV show with no regard to how familiar they are with it. After it airs, they dissect it in a conversation. This week's show: Hulu's 'The Handmaid's Tale.'

Miles Surrey (MS): After Hulu released three episodes of The Handmaid's Tale for our bingeing pleasures last week, they're going for the one-a-week model for the rest of the first season. That's probably the biggest change I can point to in the fourth episode, "Nolite Te Bastardes Carborundorum," which balances Offred, played by Elisabeth Moss (who is absolutely getting an Emmy nod this year), in the present alongside scenes from her past (I'd say, thus far, there's a 50/50 split between past and present on the show). This time, Offred's with her best friend Moira, played by Samira Wiley, in Handmaid's boot camp, presumably, not long after the United States was turned into the Republic of Gilead.

In the present, Offred is being woefully mistreated and trapped in her room by Serena because she didn't turn out to be pregnant after the last "Ceremony." It's all heavy stuff, as per usual, though this episode also establishes what should be its mantra going forward: Nolite te bastardes carborundorum, or in English, don't let the bastards grind you down.

Kevin, you and I are huge fans of The Handmaid's Tale; it's safe to say we were both blown away by the first three episodes provided to the press. 2017's already an amazing year of television, but Hulu's first great series could end up being one of the best shows out there. Did the fourth episode change your stance on the show at all? Did it get any better, worse, or more of the same?

Kevin O'Keeffe (KO): I think what really got me about this episode is how much of a turning point it feels like. That could be a cruel twist, of course — fans of the novel have told me not to expect happy days ahead. But Offred scores what's arguably her first "win" of the show, winning her freedom from incarceration by manipulating Commander Waterford. She uses his sympathy for her and his grief over the last Offred killing herself to get what she wants. She's still a Handmaid, and Gilead still rules, but that last scene was certainly shot and scored like a triumph, and it felt like one, too.

If there's an underlying theme to this episode, it's that of friendship between the Handmaids. We have those flashbacks to Offred — then called June — and Moira conspiring together for their freedom, a heartbreaking story that sees June captured and Moira regretfully leaving her behind. But we also have the mysterious message left from the previous Offred: Nolite Te Bastardes Carborundorum. The phrase becomes something of a shibboleth, establishing for Commander Waterford a connection between his two Offreds. This is the key June needs, and she uses it perfectly.

That final shot of all the Handmaids walking together, as Elisabeth Moss literally says "We are Handmaids," felt almost like what you'd see at the end of a superhero team movie. But instead of making me fist-pump, it just made me slightly hopeful that they might survive together.

MS: Yes, I'm worried about the show getting my hopes up only for it to crush our souls. We've already been told that present-day Moira, an awesome character, is dead and the original Ofglen, played by a surprisingly compelling Alexis Bledel, saw her lover executed before undergoing genital mutilation. Which is to say: I'm really scared to get my hopes up for Offred, but this was a nice victory for her.

Her scenes opposite of Commander Waterford — aka Joseph Fiennes, aka now-Evil Shakespeare — are perhaps my favorite thus far. There's so much brewing beneath the surface of a simple game of Scrabble! I don't think anyone would mistake the Commander for a good character, but his malevolence isn't as apparent on the surface, unlike his wife Serena. That makes it especially treacherous when Offred tests the limits of her freedom. We have a victory here — she's allowed to go outdoors again — but I'm concerned about what will happen if she tests her luck too much.

KO: I wonder how much of that is meant to throw us off, that the Commander is seemingly more charming while Serena is cold and angry. I think of Big Little Lies, which initially distanced the audience from Renata Klein and Bonnie Carlson, only to reveal at the end that they, too, were suffering deeply, and the women ultimately bonded together. Of course, subjugation into sex slavery and being bitchy at a school orientation are very different things. But I've liked how much we've seen the dimensions in Serena so far, partially thanks to a stellar performance by Yvonne Strahovski, and I'm hoping that continues. This show is best when it's letting its characters be textured.

I'm wondering, Miles: Have you spoiled yourself on the story? You know I did on Big Little Lies, but I've maintained a safe distance from plot description of Margaret Atwood's novel, for two reasons. One, I'm enjoying learning about this world slowly; two, Hulu and the show's producers seem game for a second season, so I wonder if the ending of the book won't be discarded for a continuation, a la Orange Is the New Black or Game of Thrones.

MS: I'm keeping my distance from any book spoilers, mostly for the same reasons as you. I like comparing Hulu's approach to that of Starz and American Gods. American Gods is going to stretch out to some four or five seasons, but they're sticking to the confines of the book (the way the showrunners described it to me at a press event, season one is roughly the first 125 pages of the book). The Handmaid's Tale, meanwhile, looks like it'll move past its source material, or at least, have more creative freedom outside of it.

I'm not sure if that helps in the long-term — and I don't want to make any assumptions — but I'm really liking what we've seen so far. There's no reason to doubt this show as an awards contender for the next few years, which is not just a timely feminist story thanks to the Trump administration, but a huge win for Hulu, which is still way behind Netflix in terms of original programming. I'm already willing to say this could be the best series any streaming service has produced thus far.

The performances are great, the cinematography is hypnotizing and the dystopian world they've built feels fully realized. Blessed be the binge.

The first four episodes of The Handmaid's Tale are currently streaming on Hulu.