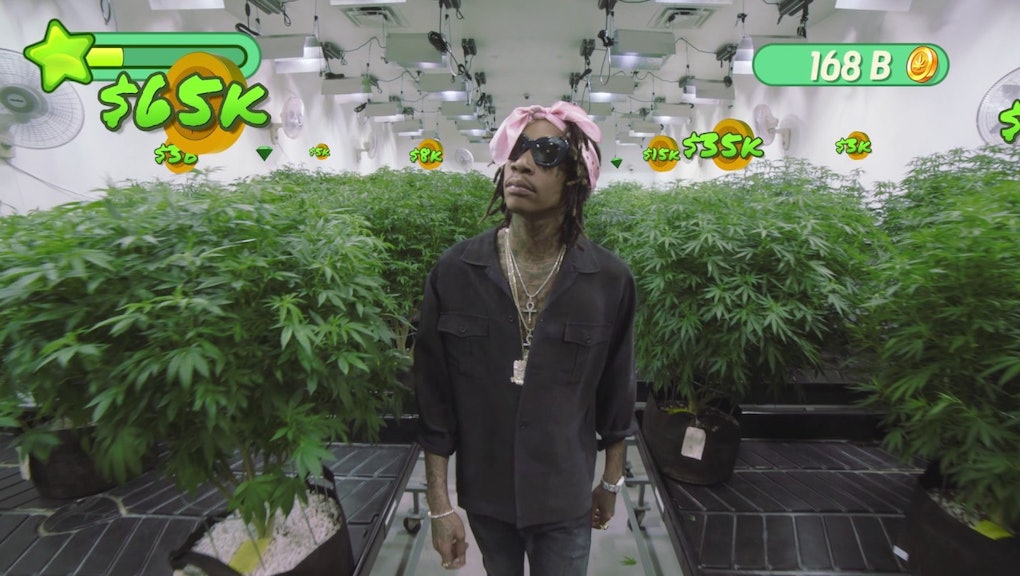 'Wiz Khalifa's Weed Farm' review: How did this marijuana game get a 5-star user rating?

Before Wiz Khalifa's Weed Farm hit the App Store and Google Play on 4/20 — the holiest day in stoner culture — the mobile game's namesake rapper posted some Instagram photos to prove that he was already addicted to it.

"Available 4/20," he wrote. "Wiz Khalifa's weed farm. It's a fun game and I play the shit all the time. Better than Pokémon." But click through the gallery, and you'll notice that the screen barely changes, Wiz doesn't seem to be actively engaged in any way, and by the final photo, he seems altogether bored.

I'll admit that I don't understand the appeal of most phone games — I had a Temple Run phase, and that was about it. Most of these apps strike me as chintzy, ad-infested mind traps with no more than a passing resemblance to the narratively sophisticated worlds accessible via console platforms or computers. For every person ostensibly entertained by the task of rapidly tapping a screen to collect virtual jewels, there are 15 other people on the subway annoyed that said person is playing their mobile game at full volume without headphones.

Wiz Khalifa's Weed Farm's sound effects, to the developers' credit, are only audible through headphones. Ditto Wiz's music, snippets of which can you play to help your marijuana clones grow (if you're willing to sit through a 20-second ad for a different, military-themed game). Tap a French bulldog on the left side of the screen, and the word "WOOF" appears there, but you hear nothing. For the most part, it's just ambient street noise accompanying the rustle and clink of your bud cultivation and the gold coins that this high-end product brings in.

The general aesthetic is cute enough — your plots lie square in the center of a sanitized garage lot, and the weed itself is rendered as swaying, glowing plants that come in a variety of strains and saturated colors. On one wall, you'll notice graffiti that says "KK Kush," a reference to Khalifa Kush, a strain bred specifically for the artist. Perhaps not coincidentally, the letters "KK" also happened to set off Kanye West when Khalifa tweeted them last year.

Khalifa was assumedly talking about getting high, but Kanye took "KK" to be a reference to his wife, Kim Kardashian West, and embarked on one of his trademark tweetstorms. But Kardashian West, you may recall, was also the face of a role-playing mobile game that made millions of dollars, with billions of minutes played. Wiz Khalifa's Weed Farm — with its clean, rounded animation and celebrity-brand hook — is obviously a descendant of that runaway hit, right down to the in-app purchases.

Your coins will get you water, and a few basic grow-op enhancements, but you also, for some reason, need green gems to buy other, better stuff. In theory, these gems are slowly earned as you gain more weed-farming experience, but buying them with real-world money is clearly the shortcut you're meant to talk yourself into taking.

But where Kim Kardashian: Hollywood had a relative wealth of settings, strategy and customizable experience — not to mention the stated, yet subtly elusive, goal of making it onto the celebrity A-list — Weed Farm keeps you performing repetitive tasks. You stay in the same place, with no solid objective aside from the collection of more money to invest in your modest marijuana empire.

Indeed, experience (and those gems) are obtained by tapping the cash outputs of each set of plants as fast as humanly possible, which after just 10 minutes of play had me wondering if I'd caused some kind of permanent nerve damage. At no point would I say that Weed Farm prompts you to think actively. At one point, a black Hummer pulls up on the street and prompts you to "harvest" your crop for cash — yes, that's the third form of money involved — which raises the question of how exactly you've been earning those coins this whole time.

All we have to break up this monotony are the occasional unexplained flyover by a cartoon drone and invitations to invite friends to the game or watch an ad in exchange for some productivity booster like LED lights. You'd think a marijuana farm might be susceptible to dramatic setbacks — a parasite infection, or maybe a DEA raid — but nothing of the sort ever happens. We don't even get to establish a customer base or make business deals. And unlike Khalifa, we never have an opportunity to partake of the fruit of our labors. Maybe I'm just too sober, but this all feels like a colossal waste of time.

Weed Farm radically simplifies marijuana as we know it today

To me, Weed Farm is a tacit acknowledgment that in 2017, marijuana is no longer a force of countercultural cool — it's a regulated industry that rakes in billions. When you make it level 10, you receive the hilariously corporate title of "Kush Consultant," and at level 12, you're a "Ganjapreneur." The existence of the app itself indicates that Khalifa's image as a weed kingpin has nothing in common with that of old-school growers or dealers.

The existence of the app itself indicates that Khalifa's image as a weed kingpin has nothing in common with that of old-school growers or dealers.

Granted, commoditizing a misplaced nostalgia for the War on Drugs era would have been problematic (anyone remember playing Drugwars on their graphing calculator during math class?), but the opposite result is a safe, neutered game. And as Weed Farm dispenses with any vestiges of a once-outlawed economy, it radically oversimplifies weed as we know it today: You may as well be harvesting corn.

Why, then, does Weed Farm boast an impressive five-star App Store rating after more than 4,000 reviews? Chalk it up to a mixture of hype and Pavlovian response. People who report "huge bug problems" or complain that they have no one to play with are still giving it perfect marks, while many simply love the unimaginative click-for-reward dynamic. Those who have advanced further in the game report one or two more developments of no special interest, and it sounds like you could beat the whole thing in a day — perhaps a nice accomplishment for someone disinclined to leave their couch.

The real selling point for Wiz Khalifa's Weed Farm is that it's a polished improvement on the dozens of crummy pot games that were already out there. At the end of the day, however, it's just FarmVille with a hip-hop spokesman.

My advice: If legal, consider planting some real pot in your backyard instead. It may be difficult, and you may get dirty, but at least you're working toward a true high.