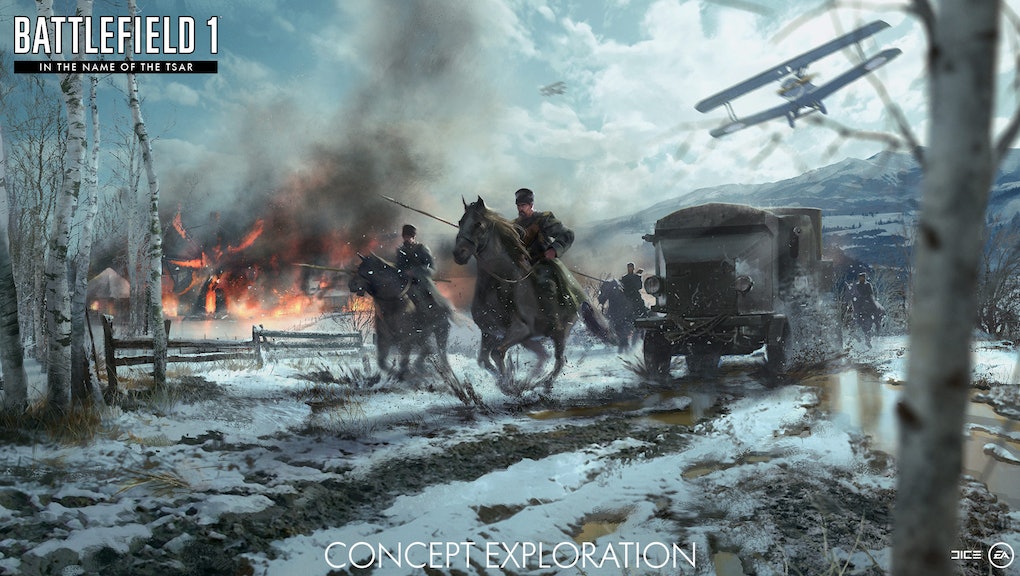 'Battlefield 1: In the Name of the Tsar' Release Date: When is the Russian Army DLC coming out?

The next bit of downloadable content set to release for Battlefield 1 is "In the Name of the Tsar," which will finally add one of the major World War I combatants that inexplicably weren't part of the base game: the Russian Empire. The specific release date for In the Name of the Tsar is up in the air right now, but below we'll detail all we know about the upcoming DLC and some speculation on when it will be coming out.

Battlefield 1 In the Name of the Tsar release date: When will the second DLC come out?

The first DLC for Battlefield 1, They Shall Not Pass, which featured the introduction of the French Army, came out on March 14. In the past, DICE has put a few months between its DLC releases for the Battlefield series, so we'll likely see it in June or July.

Battlefield 1: In the Name of the Tsar maps: What new locations will be in the new DLC?

Battlefield 1 has completely ignored the Eastern Front of World War I, which is something history buffs should be more upset about than female soldiers in Call of Duty: WW2's multiplayer. In the Name of the Tsar will rectify this by adding the Russian Army and four new maps depicting its struggle with the German and Ottoman Empires.

At least one of the new maps will be in the frigid ravines of Lupkow Pass. The Eastern Front was cold, and the new DLC will introduce characters to frozen ground and snow for the first time in Battlefield 1. Whether these environmental changes will influence gameplay isn't known yet, but it'll be a change compared to the sands of the Middle East and the greenery of France and Germany we've fought in so far.

Battlefield 1: In the Name of the Tsar weapons: What new guns are coming?

DICE hasn't released a list of the new weapons coming out with In the Name of the Tsar, but we know of at least one that has been spotted in a piece of concept art by the Battlefield Bulletin Twitter.

The Fedorov Avtomat was an automatic rifle used by the Russian Empire, and later the Soviet Union, chambered in 6.5x50mm SR Arisaka. The rifle had just come into use in 1915, but it's correct for the period and would make sense as an armament for the Assault or Medic class.

Battlefield 1: In the Name of the Tsar vehicles: What new fighting vehicles will we see?

There's still no word on what vehicles will be introduced to Battlefield 1 in the new DLC, but Battlefield Bulletin has another two suggestions that were spotted in a piece of concept art. The Garford-Putilov armored car and unique Cossack cavalry unit may be making their debut with the Russian Army.

Cossacks were a group of East Slavic-speaking peoples who were allowed semi-autonomy within the Russian Empire. In return for this autonomy, they played an extensive part in Russian conflicts between the 17th and early-20th centuries as soldiers loyal to the Tsar. During World War I, Cossacks fielded over 160 regiments and played a key role in many military conflicts on the Eastern Front.

The Garford-Putilov was built on a Garford Motor Truck Co. lorrie frame imported from the U.S. This armored car was used by both the Russians and the Germans during World War I, and would be a great vehicle to include in an Eastern Front-centric DLC.