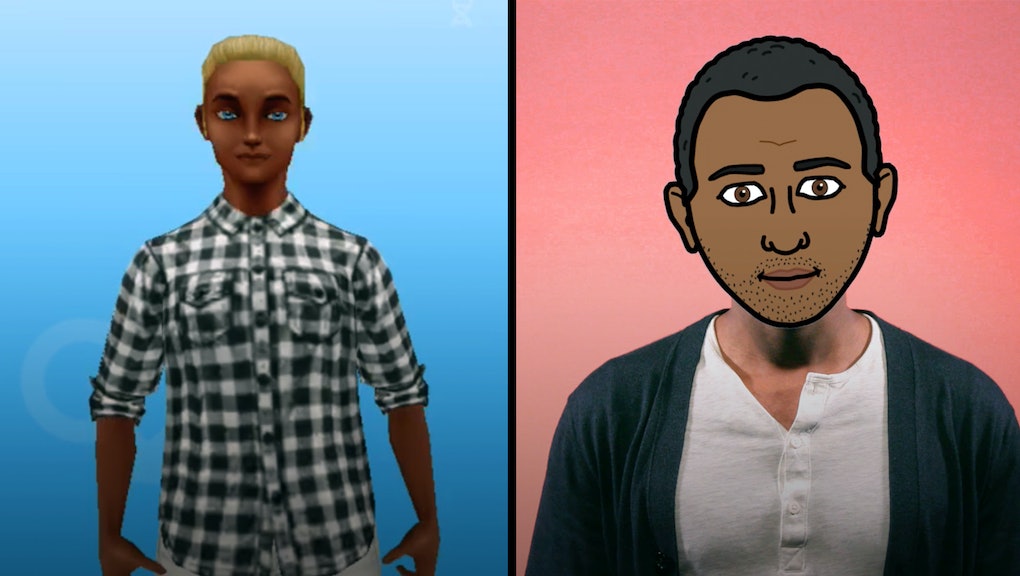 Black players don't get to look like themselves in video games.

Video game character customization isn't exactly a new trend, but recent titles like Fallout 4, NBA 2K17 and even newer Pokémon entries make it easier than ever to create a main character that looks just like you — but it helps to have straight hair.

Even when games get skin tone options right, other key details like hair type and face structure are typically ignored. The result is often a custom-made black character that ends up looking more like a brown white person.

Just check out the hairstyle options in a game like Mass Effect: Andromeda, which offers tons of straight hair textures and significantly fewer curly options.

And if you're playing a game with just one hairstyle option, like Pokémon Go, it's pretty much guaranteed it won't be curly. Just look at "me":

It may sound like we're harping on the smallest of details, but something as simple as hair can be a significant part of someone's racial and cultural identity.

"Hair texture is something that marks blackness," Dr. Yaba Blay, ethnographer and political science chair at North Carolina Central University, said in a phone interview. Blay used Bitmoji as an example of a digital character creator that offers various options but is lacking in hair types. "Looking at my Bitmoji, her hair is natural for sure, but it's definitely not my texture. Every woman's afro doesn't look like a perfectly shaped dome afro from the '70s."

Men with short hair, like me, often have the same problem. Games like Pokémon Sun and Moon or Nintendo's Mii creator may offer short hair, but in a texture that clearly isn't mine. And despite the caesar haircut's simplicity, most character creators hand you a hairline that's almost always trash.

Even Questlove has felt limited by character creation options with few options for black hairstyles:

Games with limited afro texture styles are pretty common. FIFA 17 actually does a pretty great job of offering diverse hair options, but other titles, like Mass Effect: Andromeda, fall short. The sci-fi adventure game lets you get granular when you're customizing faces, but if your hair doesn't grow straight, the choices are lackluster; it's either an afro, short hair or the one braid option provided.

"We do so many different things with our hair," Blay pointed out. "Big afro, teeny 'fro, twists, kinky twists, cornrows, etc. And they all come in different lengths." So it's disappointing to see a game like Mass Effect limit black characters to just a few options.

Is it really that hard to create realistic-looking hair?

Both FIFA and Mass Effect are published by Electronic Arts, one of the biggest gaming studios around. But there's another game in EA's lineup that relies even more heavily on designing your avatar. The Sims is the company's crown jewel of character customization, but EA told me that it's fully aware it needs to produce more authentic-looking people.

"Fans point out African-American hair is a weakness for us," Lyndsay Pearson, executive producer of The Sims, said in a phone call. "We don't have many options that I like yet, honestly."

Pearson added the game's graphics pose a challenge when it comes to deciding which hairstyles make it into the game. "We've gotten better at [hair] like dreadlocks and cornrows," she said. "Those are simpler because of geometry, but they're not the whole spectrum."

The next challenge is making these styles actually look natural. "We don't want it to feel like a paper doll," she said. "Like you took the nose off of one character and stuck it on another. It's very important that our technology behind the scenes is meshing all of those pieces together in a way that actually represents real facial anatomy."

That paper-doll effect can be seen in more non-customizable digital avatars, Blay notes. She pointed to iOS emoji as an example. Racially diverse options for emoji were introduced by Apple in 2015, but if you want to use a character with a ponytail, no matter the skin color, your only option is still blonde hair and blue eyes.

Designing black characters doesn't have to be difficult

Nikolas Draper-Ivy is an artist from Michigan who reimagines popular video game characters as black. Here are his versions of Cloud Strife and Tifa from Final Fantasy 7.

Draper-Ivy's Cloud (right) shows how a character can have yellow hair without looking like a brown Caucasian. He doesn't think character designers should really overthink it when it comes to making authentic-looking black characters.

"Black features aren't really as hard as people make them out to be," Draper-Ivy said in a phone call. "We have this set image in our mind of what makes a character black. He's gotta have a giant nose and donut lips. Well, I'm black and I don't really have full lips like that. I wish!"

"We have this set image in our mind of what makes a character black. He's gotta have a giant nose and donut lips. Well, I'm black and I don't really have full lips like that. I wish!" — Nikolas Draper-Ivy

Draper-Ivy stands by the idea that black characters can look their race without being stereotypes.

"We have this set image in our mind, even among some of our own people, of what makes a black character black," he said. "The core element of who the character is, their personality traits and morals, are what make a character."

Ultimately, Draper-Ivy's goal is the perfect starting place for any character creator: "Depict us in a way that's something you can look up to."

Check out our running list of all the black people in Zelda: Breath of the Wild and a report on how the visually impaired can still enjoy playing the Nintendo Switch. Then read up on the need for diversity reports in the games industry and Blizzard's huge missed opportunity with the non-playable Overwatch character Efi Oladele.