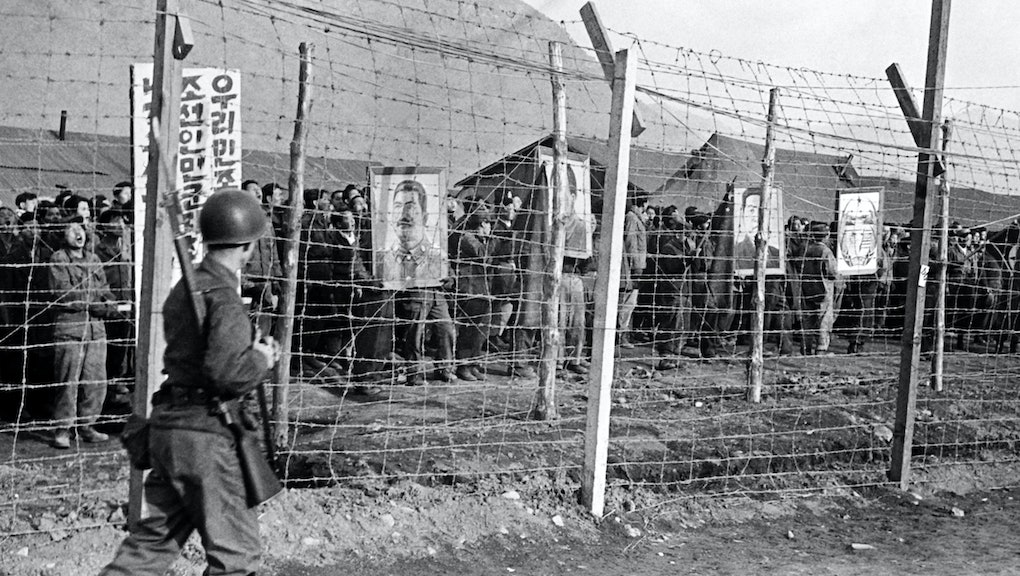 What was the Korean War? The 1950s-era conflict is why North Korea still hates us today.

Tensions between the U.S. and North Korea continue to escalate — but for North Koreans, feelings of aggression and anger toward America are nothing new.

Anti-Americanism is ingrained in North Korean culture, according to the U.K.'s Daily Telegraph, and the country even marks their discontent with a "Struggle Against U.S. Imperialist Month" each June. In a 2015 statement by the state-run Korean Central News Agency, as quoted in the Telegraph, the government called on the world to help North Korea "dismember" the "fatty monster U.S. imperialists."

But why the deep-seated animosity? It all goes back to the Korean War, a 1950s military conflict that, though overshadowed by World War II and the Vietnam War in Americans' minds, still remains ever-present to North Koreans today.

"It is still the 1950s in North Korea and the conflict with South Korea and the United States is still going on," Korean War scholar Kathryn Weathersby told the Washington Post. "People in the North feel backed into a corner and threatened."

What led to the Korean War?

The Korean War and the division between North and South Korea can be traced back to the end of World War II. Korea, which had previously been colonized by the Japanese, was arbitrarily divided up by the U.S. and the Soviet Union in the wake of Japan's WWII defeat.

The Korean Peninsula, National Geographic noted, was divided along the 38th Parallel, with the Soviet Union controlling the North and the U.S. occupying the South. The established border between the two countries, former U.S. Secretary of State (and then-Colonel) Dean Rusk said, as quoted by National Geographic, "made no sense economically or geographically," but was intended as a temporary measure.

According to CNN, in 1948 the Korean peninsula was officially divided into two countries: the Republic of Korea to the south, and the Democratic People's Republic of Korea to the north. But tensions between South Korea and North Korea's communist regime continued to mount. On June 25, 1950, the North Korean army officially crossed the 38th Parallel and invaded South Korea.

To prevent the collapse of South Korea, whose army was outmatched by North Korea's Soviet-backed military, the U.S. called on the United Nations to request that member states provide assistance to the Republic of Korea.

This was the first war in which the U.N. played a role, CNN noted. Sixteen member countries sent troops to the Korean peninsula, and an additional 41 who sent aid and equipment. The U.N.'s ultimate aim during the war was to reunite the divided peninsula, which they sought to achieve by occupying North Korea and eliminating the threat of the North Korean army.

Though troops were sent from around the world to Korea, the most prominent military force came from the U.S., whose military made up 90% of the international troops sent to South Korea's aid, according to CNN.

The United States' entrance into the Korean War was one of the first major events of the Cold War, a longstanding conflict against the Soviet Union and the global threat of communism that would last until the late 1980s.

In his statement ordering U.S. troops to aid South Korea, President Harry Truman was quick to highlight the connection between U.S. military action in Korea and the communist threat. "The attack upon Korea makes it plain beyond all doubt that Communism has passed beyond the use of subversion to conquer independent nations and will now use armed invasion and war," he said at the time.

The U.S. and other U.N.-backed troops were initially able to make substantial gains against the North Korean army, eventually capturing the capital city of Pyongyang in October 1950.

But the North Koreans would soon fight back, thanks to the entrance of a powerful ally: China. Backed by China and the Soviet Union, the DPRK launched a swift offensive against the U.N. forces. After an initial retreat of the U.N. troops into South Korea, the war soon descended into two years of "near-static operations," with neither side achieving a decisive military win.

During the war, the U.S. military was unrelenting in its devastation of North Korea — a fact that helps to fuel the country's anti-Americanism today. According to the Washington Post, the U.S. Air Force continually bombed North Korean cities and towns, killing approximately 20% of the country's population in the process. The military bombed "everything that moved in North Korea, every brick standing on top of another," Rusk said, as quoted by the Post.

The "long, leisurely and merciless" bombings, the Post noted, were criticized as being "racist and unrelenting" abroad, though their scale received little attention in the American press. The U.S. was also ready and willing to use nuclear bombs in the conflict, Mental Floss noted, but was ultimately convinced against their use by European leaders.

The war's resolution — or lack thereof

According to CNN, Soviet delegate to the U.N. Jacob Malik proposed a ceasefire, as the two sides remained in a stalemate with no decisive military victory in sight.

Truce talks began in July 1951 but were adjourned unresolved in October 1952. The talks broke down as the two sides became deadlocked over the question of repatriation for prisoners of war. North Korea wanted all prisoners of war to be immediately returned to their country of origin — a fate that thousands of the country's imprisoned citizens were unwilling to accept, the BBC explained.

It wasn't until 1953, after the death of Soviet leader Joseph Stalin, that a resolution was finally reached. The prisoners of war were returned to their homeland — or granted asylum — and an armistice was signed.

The Korean Armistice Agreement, CNN wrote, was signed by North Korea, China and the U.N., but not South Korea, who reportedly refused to sign. The resolution stopped the ongoing military conflict and officially established the 150-mile Demilitarized Zone between the two nations, which still separates the Korean Peninsula today.

But the agreement was simply a ceasefire, Mental Floss noted — not a peace treaty. The agreement "insured a complete cessation of hostilities and of all acts of armed force in Korea," but only, the document continues, "until a final peaceful settlement is achieved."

This means that 67 years after it began, the Korean War has still never really ended. And for the North Koreans, that fact remains all too clear.