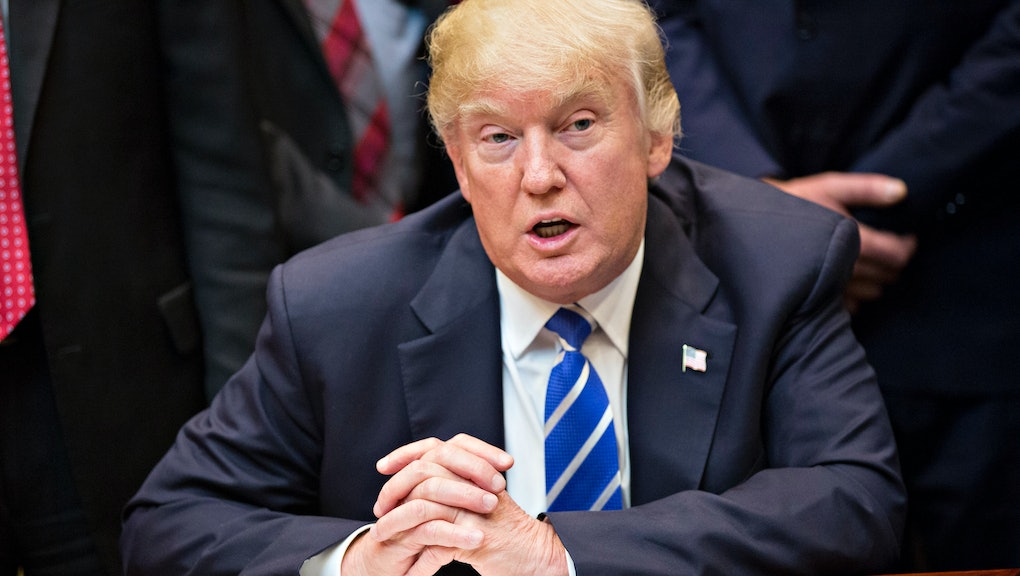 What will Trump's "religious freedom" order mean for transgender students?

President Donald Trump is reportedly planning to sign a "religious liberty" executive order on Thursday, which many fear could pave the way for legalized discrimination against LGBTQ Americans. The news is ringing alarms for many LGBTQ advocates — but what could the order mean for transgender youth, an already vulnerable population at risk of losing one of their most essential support networks?

A "religious liberty" order from the Trump administration, if the language is close to the leaked version of the order that was published by the Nation in February, would mean that people and groups could cite their faith as legal justification for discrimination against LGBTQ people.

While such an order would likely be devastating for LGBTQ communities as a whole, according to one expert, it may "actually take young lives."

"We're about to make it easier to discriminate than it is to vote in some places, and that is obscene," GLSEN executive director Eliza Byard said in a phone call on Wednesday, speaking about the potential effect a "religious liberty" order could have on LGBTQ youth, and specifically on transgender students.

LGBTQ youth as a whole are at an increased risk for suicidal thoughts, according to the Centers for Disease Control and Prevention. One small-scale study found that around 25% of trans youth reported suicide attempts. According to Byard, Trump's order could cut off essential lifelines for those young people who are already at risk.

In some states where "religious freedom" bills have already been passed, a young trans person who goes to a public school counselor could be turned down for counseling, Byard said, if the counselor has a religious objection to treating that student.

If that happens, Byard said, "you're stuck." Which is a frightening but disturbingly real possibility for LGB and trans youth, "particularly students in rural areas," Byard said, for whom school counselors might be the only access they have to mental health professionals.

This is already a reality in states like Tennessee, which enacted a "religious freedom" law in 2016 that allows mental health providers to deny services to LGBTQ people. Actions like this, Byard said, send a message to trans youth "that their right to survive and to thrive is less important" than someone else's right to turn them down for treatment because of religion. "That's a horrifying message."

For trans youth, who may already have to fight a high-profile fight just for the basic right of using the correct school bathroom, a nationwide "religious freedom" order could ensure that the adults who hold power over vulnerable young people have an institutional framework for their discrimination.

Byard said that such an order threatens to undo much of the progress made over the past few years toward making schools safer for LGBTQ students. School, she said, can be essential for young people who might face rejection at home. LGBTQ youth are already at a much higher risk for homelessness due to family rejection.

While the text of Trump's order has not yet been released, it's already expected to face legal challenges. The ACLU has said that it will take the order to court if it "attempts to provide a license to discriminate against women or LGBT people."

However Byard said that, even if the order is struck down, it could send a symbolic message to LGBTQ young people that their lives and safety are less valuable, and that could have lasting impact.

"It's gonna hurt people, it may cost lives," Byard said. "There are young people who are scared right now. ... What does it say about us as a country that children are scared?"