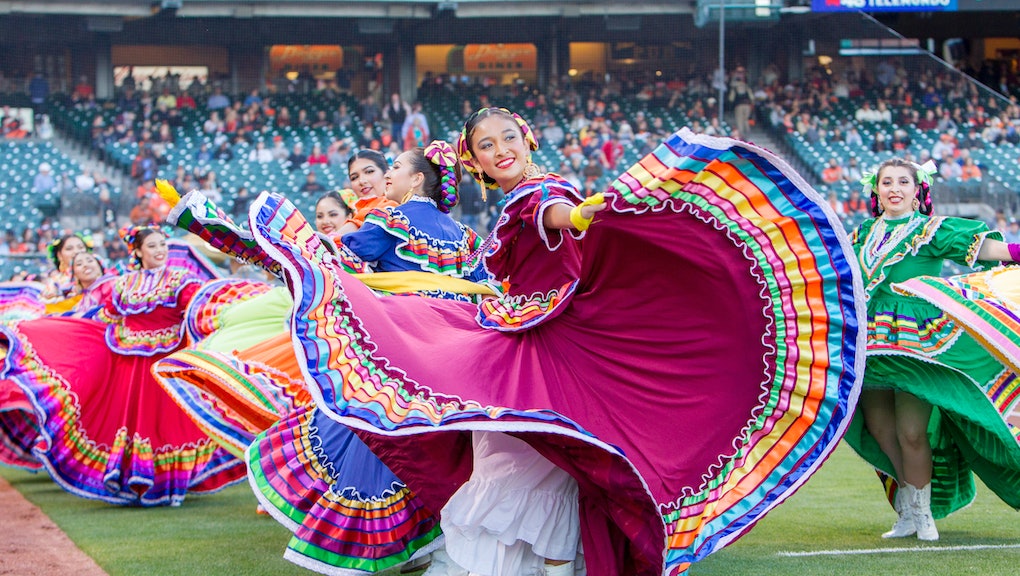 On Cinco de Mayo, here's how not to be a racist

Cinco de Mayo: a holiday known for oversized sombreros, mouth-wateringly delicious tacos, one too many margaritas and racism.

Every fifth of May, Mexicans and Mexican-Americans prepare for yet another day of cultural appropriation, racist jokes and perhaps a tweet or two from President Donald Trump about his long-promised border wall.

A year after he tweeted out a photo of him eating a "taco bowl" and proclaimed his love for "Hispanics," Trump is still fighting for a multi-billion dollar border wall to keep out immigrants that carry "infectious diseases."

Despite conservative's efforts to build a border wall and spread hateful rhetoric about Mexicans, every year it seems more people, from both sides of the political spectrum, are celebrating Cinco de Mayo. Too often, unfortunately, celebrants continue to enforce harmful stereotypes about Mexican people.

As a fourth-generation Mexican-American, I'm hoping 2017 is the year we, as a community, put an end to the appropriation and degradation of an entire culture. This Cinco de Mayo, know the difference between cultural appropriation and cultural appreciation in order to make this "holiday" enjoyable for everyone.

Before you go out and drink as many Coronas as you can, try to get a basic knowledge of what you're "celebrating." Frequently confused with Mexico's independence day, which is Sept. 16, Cinco de Mayo commemorates an unforeseen victory by the Mexican army against the French at the Battle of Puebla in 1862. Puebla is located in east-central Mexico and is one of the 31 states that makes up the country.

Traditionally, Cinco de Mayo is celebrated regionally (mainly in Puebla) and is known as El Día de la Batalla de Puebla. Read: Very few Mexicans actually celebrate this "holiday." Cinco de Mayo rose to popularity in the United States in the 1960s when Chicano activists began to raise awareness of the holiday as a way to bolster Mexican-American pride during the Chicano movement (also known as Chicano Civil Rights Movement) of the decade.

The Chicano movement happened alongside the civil rights movement in the United States. Activists like Cesar Chavez, Dolores Huerta, and Rodolfo "Corky" Gonzales were among the many Chicanos advocating for civil rights, all the while attempting to empower Mexican Americans. In fact, the rise of Cinco de Mayo in America was an attempt by the Chicano activists to create a sense of unity with one another during a time when they were shunned by both Mexico and the United States. The term Chicano was originally used as a derogatory label for the descendants of Mexican migrants in America. Embracing the derogatory term in the 1960s was meant to act as a symbol of ethnic pride as opposed to shame.

And, while Cinco de Mayo in America is widely interpreted as a celebration of Mexican culture, the lack of appreciation for Mexican heritage, the historical significance of the event itself, and the influx of racial stereotypes has transformed the holiday into an almost unbearable occasion for anyone of Mexican descent.

"[Cinco de Mayo] has become degraded, particularly by college kids, and highly commercialized," Dr. David Hayes-Bautista, author of El Cinco de Mayo: An American Tradition," told the Sacramento Bee. "It's become a caricature. We have forgotten why we celebrate Cinco de Mayo, and it has become Drinko de Mayo."

"We need to bring the history back and reclaim it as an authentic Latino holiday," Hayes-Bautista added.

Rather than subjugate Mexicans and Mexican Americans to yet another year of cultural appropriation and lack of appreciation, read up on ways you can help celebrate our beautiful heritage — and ways to help avoid further degradation of an entire culture.

Just as you wouldn't dress up as an Irishman on St. Patrick's Day, you shouldn't use the Mexican culture as a costume. Read: If you're not of Mexican descent, ditch the party store accessories. This means no fake mustaches, poorly made sombreros, maracas, or rainbow-colored serapes. And, while we're at it, leave the sugar skull makeup look alone — this is traditionally reserved for Día de Los Muertos (Day of the Dead), not Cinco de Mayo. Wearing sugar skull makeup out to drink with your friends just furthers the lack of cultural understanding and enhances the appropriation.

Although seemingly harmless, dressing in a "Mexican costume" is actually quite offensive. By wearing any sort of "Mexican garb," you're furthering cultural stereotypes. If you ever visit Mexico (or have visited Mexico), you'll notice we don't all have mustaches and run around wearing sombreros.

In 2014, students at the University of California, Davis planned a "Cinco de Drinko" party where attendees were encouraged to dress in festive attire. Local news agency KCRA reported that students who dressed in Mexican clothing would be "chased by other students dressed up as Border Patrol agents." Additionally, the Sacramento Bee reported that the Facebook event page for this UC Davis party featured "four male students, wearing sombreros, trying to hop a chain-link fence while two female students in Border Patrol attire smile." This particular event was canceled, but the creation and participation in other such parties continue to exist, despite their connotations.

Plain and simple: Don't use derogatory names or insensitive jokes. This goes for every culture — whites, blacks, Asians, Indians — let's just not further the hatred.

Things to do this Cinco de Mayo

The best way to celebrate a culture is to learn more about the history and people that helped create a nation.

Rather than drink yourself into a stupor this year, perhaps try another more educational activity. For example, you could listen to music by a Mexican artist like Selena or Lila Downs. You could attend an authentic mariachi performance, or take a tour of a museum dedicated to Mexican art or history. You could even read a Mexican history book or support a Mexican author by purchasing one of their novels.

Host a movie marathon dedicated to a specific Mexican director — might I suggest Alejandro González Iñárritu or Guillermo del Toro? Hey, you could even watch a historical documentary on the country! Trust me, there's so much more to do than drink on Cinco de Mayo. It's all about trying to show appreciation, rather than appropriation, this holiday.

Yes, Mexican culture is more than food and drinks, but if you do throw a Cinco de Mayo party, you should attempt to make your own guacamole and avoid catering from Chipotle or Taco Bell. Fast food chains like these are in no way "real" Mexican cuisine. Try making flan with a simple step-by-step recipe or even Mexican street corn — yum!

Speaking of food, if you don't want to cook on Cinco de Mayo, consider supporting a Mexican-owned restaurant in your town. After all, Cinco de Mayo should be about celebrating the Mexican culture, and what better way than to enjoy a hearty meal full of traditional, mouthwatering Mexican food made by the people who know best.

Aside from food, many U.S. cities host festivals for Cinco de Mayo that include traditional music and dance, historical demonstrations, parades, and even equestrian shows. For example, San Diego's "fiesta" takes place in Old Town, "the birthplace of California." This historic spot was where Mexicans and Europeans first settled — a befitting place to hold a Cinco de Mayo festival. In addition to Mexican shops and restaurants permanently located in the area, the "Fiesta Old Town Cinco de Mayo" features live music stages, Folklórico performers, and much more. The celebration is meant to be fun, festive and educational.