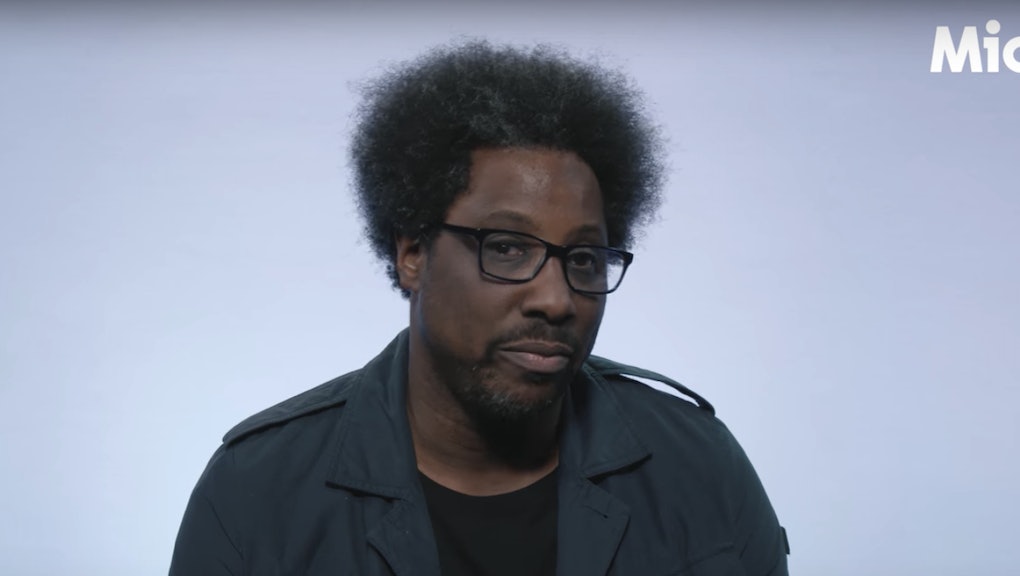 Like most comedians, W. Kamau Bell can find some laughter in dark and uncertain times — even when he's face-to-face with white nationalist Richard Spencer. But Bell is more than just a comedian; in the new season of CNN's United Shades of America, Bell serves as a witty educational guide in a cultural safari of President Donald Trump's America.

In the eight-episode second season, which airs on Sundays at 10 p.m. Eastern, Bell takes viewers on a journey outside of their own social and political bubbles. In one moment, he's in Washington, D.C., sharing a Thanksgiving meal with Muslim refugees. In another, he is in the heart of Chicago's most violent neighborhoods and speaking with gang members in the South Side. His laid-back and affable demeanor allows others — whether they're Standing Rock protesters or people living in the rolling hills of Appalachia — to speak openly about their experiences living in the United States and their visions for the future.

The election really taught us that we're living in separate silos in this country. We clearly aren't looking enough at the wide spectrum of what America is. A lot of times we're looking at our part of the country and we know there are other parts of the country, but we think our part of the country is the REAL America — whether that's in the South, where they think it's the real America, or Texas, Portland and Brooklyn.

Bell doesn't sugarcoat anything. In his new book, The Awkward Thoughts of W. Kamau Bell, released on Tuesday, Bell is once again honest about the harsh realities and intolerable truths of this country. From fatherhood to race relations, Bell is on a clear mission: to help us see the U.S. for what it actually is.

Mic sat down and spoke with Bell about his show, book and a whole range of societal issues, including white terrorism, campus free speech, right-wing politics, police brutality and his brand of stand-up comedy.

Here are the highlights of the interview, edited for length and clarity:

Mic: In the past few days, Americans have seen a string of attacks by white men against minorities in San Diego, California; Lexington, Kentucky; and even in Manhattan, New York. In what ways do you think white terrorism is becoming a far more significant and dangerous threat to this country?

W. Kamau Bell:  The history of this country is also the history of white terrorism. Sometimes it was state-sanctioned and sometimes it wasn't. What is slavery and the genocide of Native Americans, other than terrorism? But then, when that becomes illegal, suddenly the Ku Klux Klan steps into place. As far as police officers in this country, black and brown people often find themselves at the shit end of the bat stick — that's another way you can call it white terrorism, even if the cops are not white.

The thing happening right now is white men have created a perception among other white men that somehow they're being oppressed. It comes from the top down. It comes from Trump — who acts like he's some outside force even though he's a billionaire – and by putting Stephen Bannon and Stephen Miller in the White House. These are people who believe America is primarily for white men, not even people, but white men. The fact white men don't have every job in this country that white men want somehow has them believing they're oppressed.

You received a lot of backlash after the commercial for your interview with Richard Spencer aired. Why did you decide to interview Spencer? What do you say to people who were concerned with you giving a platform to a white nationalist or worried the interview would normalize his views?

WKB: When we booked Richard Spencer, we were trying to find the voice of someone who was anti-immigration. We booked him in the summer of last year. We didn't know how frenetic [the election] was going to get.

For United Shades of America, we could just put an hour of programming of just beautiful touching stories of immigration, which is fine, but it's false. It creates an impression that America thinks that — that we are all in support of immigrants and refugees, and that these people are all living here, and that as long as they work hard and do the right thing, America will embrace them.

When was the first time you realized you were a black man in this country?

WKB: When I was around the age of 11, my mom took me out of the house to walk down the street to the drug store. At the time, it was sort of the age where I would leave the house and go down the street by myself. I was living in Boston.

We walked into the drug store. She looked around and she said:

See that guy standing over there looking at us? That's the store detective. When you come here by yourself, he's going to follow you around the store. So don't touch anything unless you plan on buying it. When you pick it up, immediately take it to the counter, buy it and leave. Make sure you don't accidentally put anything in your pocket. Make sure you're aware of where your hands are at all times.

I remember it to this day. She's basically saying, "When you're not with me, you're literally on your own and you can't expect the world to have your back." That's something that I have learned from that moment and something I've kept with me ever since. As I raise two daughters, my old daughter is 6, and at some point, I might have to have a conversation with her about that. You want kids to be kids. An 11-year-old shouldn't have to think about that.

You've traveled across the country for United Shades of America. You met with indigenous folks, refugees and members of gangs in the South Side of Chicago. Seeing what our political and social climate is like right now, do you have hope for this country?

WKB: People are hopeful. I went to a refugee Thanksgiving, and everybody was laughing and having a good time. This was happening in a country that just elected Donald Trump as president. People in the South Side of Chicago are experiencing a lot of pain, but they're sending their kids to school and they're working hard. They believe — even though they don't have the resources — they can make the most out of what they have. I feel like people are hopeful. I don't think I would have two daughters if I wasn't hopeful on some level.

But hope without work is nothing. So that's why I'm here right now talking to you.