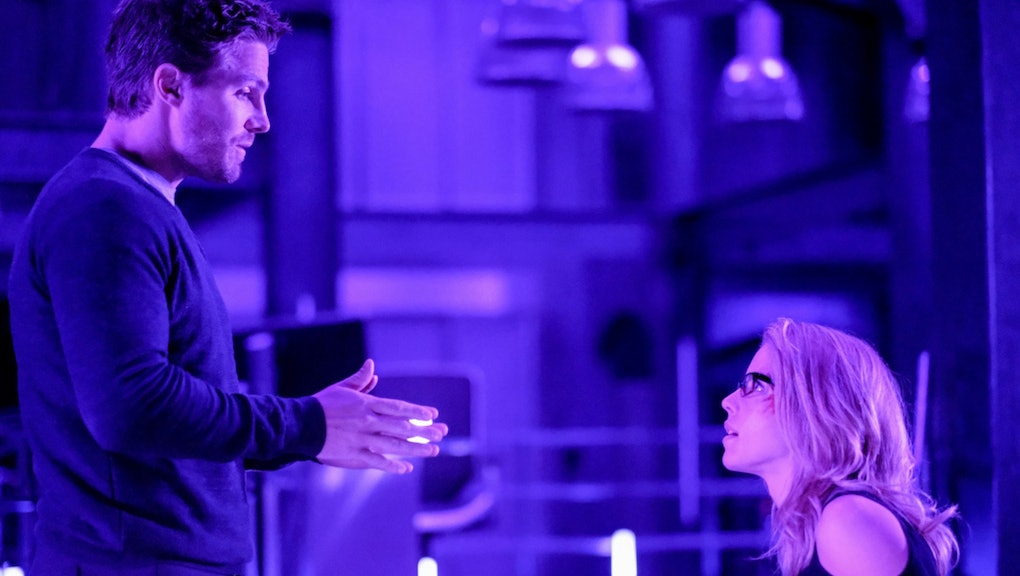 'Arrow' Season 5, Episode 20 Recap: For Oliver and Felicity, it's all about trust

Season five, episode 20 of Arrow was arguably the series' most intimate yet. "Underneath" thrust Oliver and Felicity into a life or death situation as the former lovebirds were trapped in the bunker with both time and air running out. And if the close quarters weren't intimate enough, the whole theme of the episode brought it over the top: It was all about trust.

[Editor's Note: Spoilers ahead for season five, episode 20 of Arrow.]

It seems that Arrow has been building towards this moment between Oliver and Felicity for quite some time now. In season four, the pair — known to fans as "Olicity" — were engaged and set to be wed. But it was the revelation that Oliver not only has a son, but kept that information from Felicity, that doomed their relationship.

Early in season five, Felicity was the one that initially argued that Oliver should recruit a new team. But Oliver stubbornly held out. The tension between them, though, came to a head in last week's Arrow, in which Oliver refused to back Felicity's decision to use Helix to track down Adrian Chase, aka Prometheus. For Felicity, her blind devotion to Oliver, and his lack of reciprocation, speaks to his lack of trust in her.

In "Underneath," for reasons that were not initially clear, Chase sets off an EMP in the bunker, trapping Felicity and Oliver. To make matters even worse, the EMP short-circuits the device that allows Felicity to walk. This leads to a debate between the two over how to escape what will eventually become a death trap.

Oliver tries his way first — climbing the elevator shaft — but that doesn't work out too well. Felicity pleads for him to listen to her idea, but she also makes things worse by accidentally releasing methane gas into the bunker. To that point, the episode was actually rather slow and, frankly, quite forgettable. But things change as Oliver and Felicity's time draws closer to the end.

In an emotional retort, though, Felicity explains that Oliver has been through more in the last decade than most could even imagine. He spent five years in hell only to return to a city plagued by evil. And this speech from Felicity may very well be what turns Oliver's life around — even opening up the possibility for Olicity to thrive once more.

The theme of trust in episode 20 extends beyond Oliver and Felicity — though it did play into the flashbacks between the two (as seen in the lovely tweet above). Trust, though, was the issue at the center of Lyla and John's relationship. And after last week's episode, John remains uncomfortable with Lyla's decisions as the head of ARGUS.

The parallels between John and Lyla's situation and that of Felicity and Oliver are obvious. Felicity is upset that Oliver doesn't trust her to make the same decisions he makes every day. And that is just what bothers Lyla. She doesn't understand why John would not trust her when he blindly follows Oliver. Yet both Oliver and Lyla operate in morally grey areas.

Apparently, that argument pays off, though, because John and Lyla's relationship seems to reach steady ground towards the end of the episode. And it's a good thing that everybody is relatively back on the same page, because the episode ends with Chase confronting Oliver's son.

The question now: What will Prometheus do next?