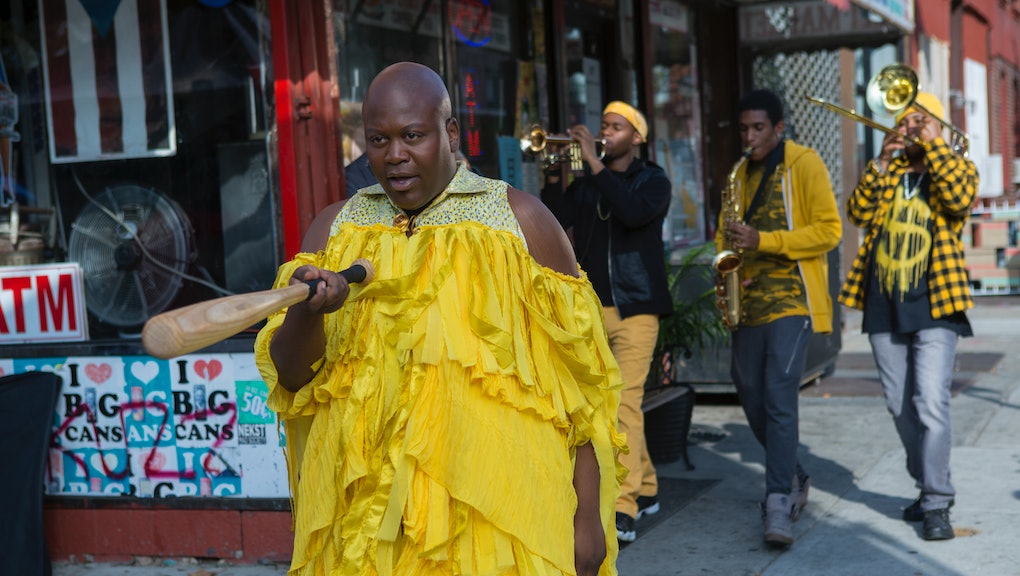 'Unbreakable Kimmy Schmidt' season 3 leads with humor, not with heart

There are two Unbreakable Kimmy Schmidts. One, the more expected, is a worthy successor to creators Tina Fey and Robert Carlock's beloved 30 Rock. It's witty and quick, ultimately using its characters in service of the comedy. Even the cast is familiar: There's Jane Krakowski playing a J-named, out-of-touch blonde and Tituss Burgess starring as a flamboyant scene-stealer. If you like that Kimmy Schmidt, you'll enjoy the first six episodes of the Netflix series' third season, premiering May 19.

But the other Unbreakable Kimmy Schmidt first revealed itself at the end of season 2. Instead of focusing on the kind of rapid-fire, hyper-self-aware jokes that Fey and Carlock are known for, the show proved it had a more thoughtful side by facing some seriously sobering material. The ordinarily plucky Kimmy's PTSD — the result of years spent kidnapped in Reverend Richard Wayne Gary Wayne's bunker — was addressed head on in a compelling therapy storyline. It was still a funny show, but the writers enriched and deepened their main character, who would have otherwise remained a caricature, and in the process they provided star Ellie Kemper with more emotional beats to play.

Sad news for fans of that Kimmy Schmidt: Season 3's first half is not that show. After taking some truly ambitious risks in season 2, Fey and Carlock seem to have retreated, crafting a funny but underwhelming batch of episodes that satisfy but do not challenge.

Despite not returning to the therapy they tapped in the latter half of season 2, the showrunners do draw on past triumphs. Unfortunately, that means the first six episodes often feel like a greatest-hits reel.

Did you like those Now! That Sounds Like Music song riffs in "Kimmy Meets a Drunk Lady!"? Good, because there's a whole episode of Titus Andromedon performing Lemonade parodies after he thinks his boyfriend Mikey is cheating on him. Did you miss Jacqueline's daughter Xanthippe Voorhees in season 2? Luckily, because this season is about Kimmy going to college, the similarly university-bound Xan is in plenty of episodes.

Most of these repeated beats are fine; the Lemonade send-ups are hilarious in their precision (Tituss Burgess might be incapable of not being funny) and Dylan Gelula's delightfully bratty performance as Xanthippe remains a gift. But there are some more unwelcome returns, too: The sixth episode of season 3 is a treatise on know-nothing millennials that comes across just as condescending as season 2's ill-advised, internet-bashing episode "Kimmy Goes to a Play!" Unbreakable Kimmy Schmidt can be a remarkably judgmental show considering its sunny and positive protagonist.

In fairness, the second season of Schmidt also spent its first six episodes messing about, wasting time on a short-lived plot about Titus' wife and Kimmy dithering over her feelings for Dong, as played by Ki Hong Lee. The therapist Kimmy sees, Andrea (played with remarkable pathos by Tina Fey), wasn't even introduced until episode 9. That story, which critics had no knowledge of when they reviewed the show, cast the entire season in a new light — suddenly, there was an arc about Kimmy coming to terms with her trauma, and we weren't just watching a live-action cartoon. One running gag throughout the season, Kimmy's burping, was diagnosed in therapy as a manifestation of her keeping her abandonment feelings about her mom at bay. Small jokes sewn early on paid off in personal growth for Kimmy. What once felt like pure, broad comedy was actually bait-and-switch foreshadowing.

So any mixed feelings about the first half of season 3 come with an asterisk: Fey and Carlock could have a story waiting in the wings that will put the first six episodes in a different, more meaningful context. If that's the case, this season would deserve a reevaluation — of course, there's a worthy counterpoint that a season of TV shouldn't only work after seeing the second half of it. Otherwise, why write and produce 12 episodes? That's a lot of excess to cut through before the season actually becomes about something.

In an age when other shows are having success with shorter episode orders (Netflix's own Dear White People and Stranger Things come to mind immediately), pacing and investment of time have become major issues for TV viewers. Dear White People tells a unique story loaded with character-based humor and story development in less than five hours. Unbreakable Kimmy Schmidt serving its audience a ton of empty-calorie laughs feels more pointless now than it did even a couple of years ago.

There's nothing wrong with simply aiming to entertain, and Unbreakable Kimmy Schmidt certainly delivers on that front. Kemper, Burgess and Krakowski are all in fine form, and the writing is as sharp and fast-paced as ever. But the creative team behind this show have established that it can be much more than a colorful joke generator in the mold of 30 Rock. Now it's hard to settle for anything less.