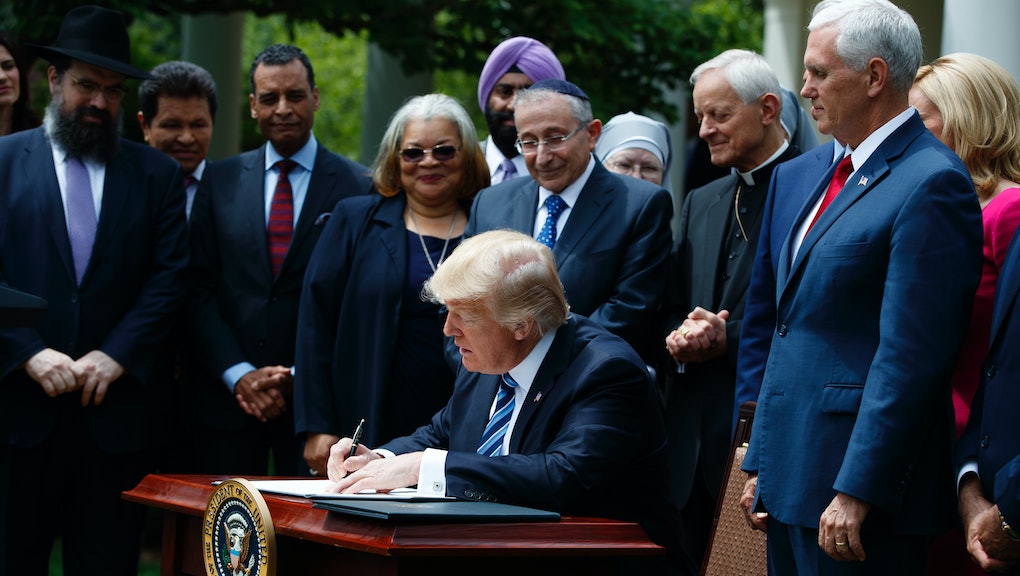 The American Civil Liberties Union announced in a statement on Thursday that it plans to sue President Donald Trump over a recently signed executive order allowing religious organizations to endorse political candidates.

In the statement, ACLU executive director Anthony D. Romero said the executive action served as a "broadside to our country's longstanding commitment to the separation of church and state."

"Whether by executive order or through backroom deals, it's clear that the Trump administration and congressional leadership are using religion as a wedge to further divide the country and permit discrimination," he said.

"We intend to file suit today."

Speaking from the Rose Garden surrounded by religious leaders on the National Day of Prayer, Trump said we will "not allow people of faith to be targeted, bullied or silenced anymore."

"We will never, ever stand for religious discrimination," he said during his remarks. "Never, ever."

But in the ACLU's statement, released shortly after the order was signed, the group vowed it would "see Trump in court, again."

"President Trump's efforts to promote religious freedom are thinly-veiled efforts to unleash his conservative religious base into the political arena while also using religion to discriminate," the statement read. "It's a dual dose of pandering to a base and denying reproductive care."

Update: On Thursday evening, the ACLU reversed its decision and decided it won't sue Trump over his new "religious freedom" order. "After careful review of the order's text we have determined that the order does not meaningfully alter the ability of religious institutions or individuals to intervene in the political process," ACLU's Executive Director Anthony Romero said in a statement, per HuffPost. "The order portends but does not yet do harm to the provision of reproductive health services."