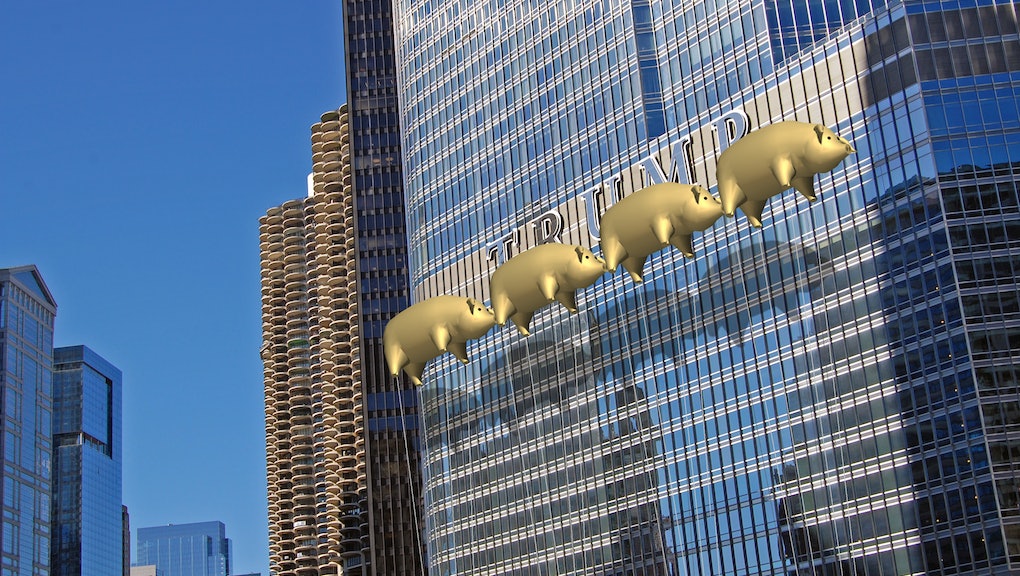 A Chicago architecture firm on Wednesday announced plans to block Trump Tower in the city with four golden pigs to protest the "ridiculous nature" of Donald Trump's presidency.

"We're not necessarily heavily political. We count ourselves as practical," Jeffrey Roberts, a partner at New World Design Ltd., told Mic. "It's not politics. It's a response to indisputable facts."

The plan is to raise the massive helium balloons for one day this coming August or September and block the sign bearing Trump's name on the downtown skyscraper.

Roberts and his partner at New World Design Ltd., Erich Stenzel, originally floated the idea in late 2016, after Trump's election. According to Roberts, the outpouring of support the plan received convinced the team to go forward with it.

"We're putting this up there to support our community," Roberts said.

Trump Tower has long been a source of controversy in Chicago — the city, led by Mayor Rahm Emanuel, publicly feuded with Trump in 2014 when the then-reality TV star emblazoned his name on the trunk of the building. Since Trump's rise to power, the building has served as the epicenter of protests against his administration in the city.

Though the building itself "contributes nicely" to the Chicago skyline, Roberts said, the gaudy sign spelling out Trump's name in 20-foot tall letters is in "bad taste" and its "message is wrong for the city of Chicago." The night after Trump won last November, as protesters demonstrated against his election, Roberts saw the "glowing Trump sign" and began trying to come up with an idea to give Chicagoans a "relief" from it.

Since proposing the installation last year, he and Stenzel have poured hundreds of hours into the project, scoring the blessing of Pink Floyd's Roger Waters, talking with Chicago officials and hammering out the logistics of the plan.

The balloons — the size of double-decker buses, Roberts said — will be anchored to a construction barge in the Chicago River and screen the tower for a single day, the pigs facing east toward Washington, D.C.

The city has yet to give the project the final stamp of approval, but Roberts said that officials seem to support the plan and will likely give it the go-ahead. They are now raising money to fund the installation, with the hope of also bringing the Orwellian pigs to Trump's building in Las Vegas.

Roberts said he hopes "Flying Pigs on Parade" will start a conversation about the "ridiculous" political environment and support the "rational" community in Chicago opposing Trump's presidency.