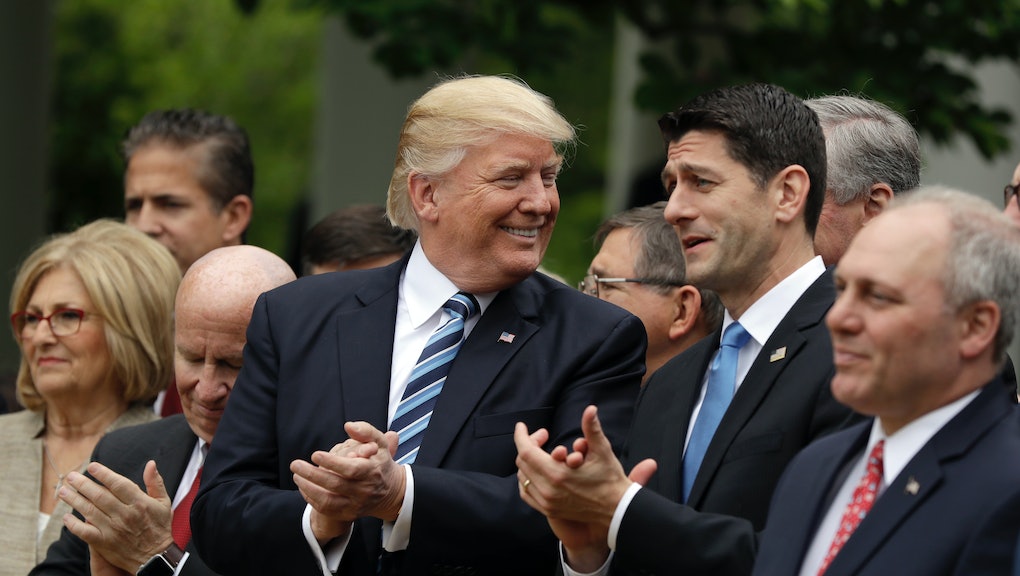 Obamacare had 79 committee hearings before it passed. Trumpcare had none.

House Republicans voted to send the American Health Care Act — their plan to replace the Affordable Care Act — to the Senate on Thursday in what opponents lamented as a display of brazen hypocrisy.

Since the ACA was passed in 2010, Republicans have complained that Democrats "jammed [the ACA] down peoples' throats."

They objected to "back-room deals" and a pace that they said Democrats designed to prevent their constituents from reading the bill.

"It shows how embarrassed these Democrats are of their bill," former Rep. Michele Bachman said at the time. "They know this health care bill is radioactive with the American public and if they give the American public more than three days to read this bill, all hell might break loose and they might never get this bill actually passed and done."

But the truth is, the ACA took months to craft, according to the New York Times, and was the subject of 79 hearings.

By contrast, the AHCA was forced through the House without a single hearing in relevant committees, no score by the Congressional Budget Office and admissions from members of the House GOP that they had not read the very bill they voted on.

"I don't think any individual has read the whole bill," Rep. Thomas Garrett said on Thursday. "That's why we have staff."

That means the Republican health plan has not been subject to the same vetting as the ACA and the full impact of the bill is unclear.

The first version of the bill failed to come up for a vote in March after President Donald Trump and House Speaker Paul Ryan could not get their own party to agree on it. That bill was projected to kick 24 million Americans off their health care, raise costs for seniors and low-income Americans and possibly trigger a death spiral in the individual markets.

The latest draft of the AHCA — which narrowly passed through the House and was opposed by prominent patient advocacy groups — might have an even harsher impact, according to an analysis by the Washington Post's Paul Waldman.

That such a significant bill was so hastily moved through the House has even rubbed some Republicans, including Sen. Lindsey Graham, the wrong way.

The GOP health plan will now head to the Senate, where a bad CBO score could doom it, handing Trump and the Republicans another legislative defeat. For now, though, Republicans are celebrating a victory that brings them a step closer to repealing former President Barack Obama's health reform that reduced the number of uninsured Americans by 20 million people.

"Today was a big day," House Speaker Paul Ryan said in a giddy press conference. "But it is just one step in this process."