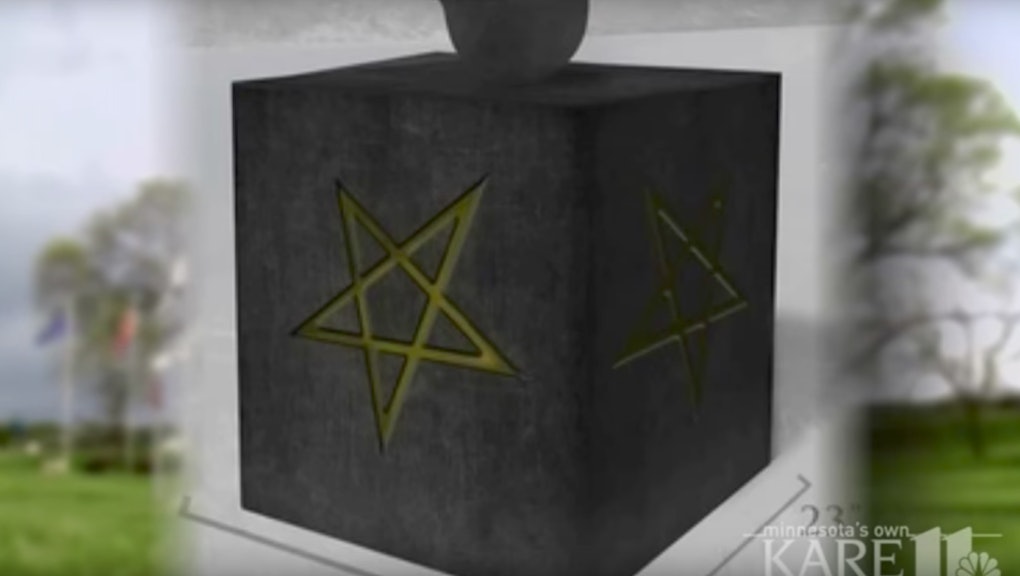 Satanists in the United States are finally getting their very first public monument — and it's going up in the small Minnesota city of Belle Plaine.

The Satanic Temple won the right to erect a monument in Belle Plaine's Veterans Memorial Park after the city put up a memorial statue featuring a cross, the Star Tribune reported in April. Some residents complained about having a religious symbol on public property, so city officials decided to remove the cross from the statue.

That removal, though, launched a slew of other complaints — so, as a compromise, officials reinstated the cross but also decided to open up a "free speech zone" in the park which will accommodate up to ten "temporary memorials" provided they honor veterans.

That's when the Satanic Temple, headquartered in Salem, Massachusetts, decided to get in on the action and erect their own veterans memorial.

"This is definitely a first," Lucien Greaves, spokesperson and co-founder of the Satanic Temple, said on Friday.

"It was a bit surprising that Belle Plaine instantly seemed to grasp the situation and didn't offer any illegal pushback," Greaves said.

The planned monument will be "a black steel cube adorned on each side with a golden inverted pentagram and adorned at the top with an empty soldier's helmet," according a statement from the Satanic Temple.

Greaves said the monument is already under construction, and the Satanic Temple is now fundraising to offset the costs associated with building and shipping the monument. As of Friday morning, the fundraising campaign had already raised more than $2,500 towards its $19,500 goal.

According to Greaves, the Satanic Temple, founded in 2013, has around 100,000 members across its worldwide chapters. Its seven tenets, listed on its website, include "People are fallible" and "The freedoms of others should be respected, including the freedom to offend."

Greaves called political activism an important part of the Satanic Temple's beliefs. But, he said, something that people might not know about Satanists is that "we do have fun too."