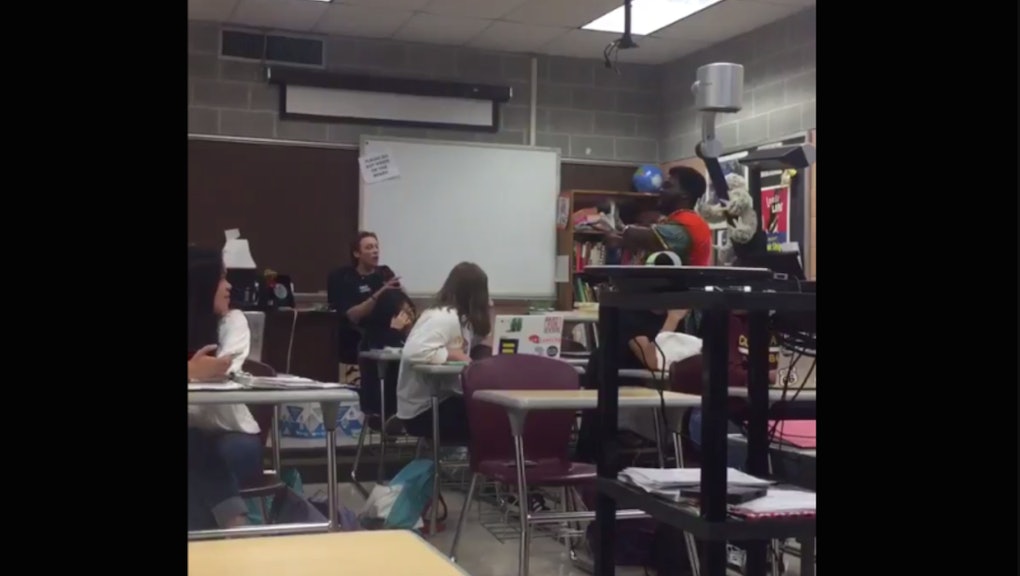 This Louisiana teacher thinks it's OK to say "nigger." Then, his student schools him.

On Thursday, a video posted on Twitter shows a white teacher at Louisiana's critically acclaimed Ben Franklin High School debating a black student on whether white people could say "nigger."

According to the Root, the teacher, identified online as "Coach Ryan," argued that it's acceptable for white people to say the racial slur since its meaning has changed over the years.

"The word has been commoditized so that anyone can use it, and it's not a negative connotation," the teacher said.

The student contested, pointing out there's a racist connotation when a white person calls a black person the slur. "Why can you not understand that it's racist for a white man to say 'nigger' to a black man?" the student said. "It's fucking racist."

The student then turns around to a white classmate and rhetorically asked if they would ever say the word. He then quickly asks the rest of the classroom before telling the teacher that no one in their right minds would think it's acceptable to use the racial slur. The student said the meaning of the slur changes based on race of the person saying it.

But, of course, the teacher pushed back.

"Not if you want the world to move on," the teacher retorted. "If you want this world to be the way it was 50 years ago, then you're true — you're right."

"If a white man saying nigger, that's just not moving on," the student responded. "If you say nigger, it's slavery."

It was only a matter of time until the teacher said the slur. "Nobody says 'nigger,'" he said.

"Don't fucking say that," the student said. "You can't say 'nigger' or 'fucking nigger.' ... You're my fucking teacher; don't say that shit."

"Please, it's a word," the teacher replied. "You cannot go through life acting like a word can affect you."

After the debate, students from the class went to the school principal's office with the intention of staging a sit-in, the Times-Picayune reported. Instead, the school conducted an hour-long assembly on the subject of race and identity, according to the Times-Picayune.

At the assembly, the student in the video eloquently explained why the anti-black slur has a different connotation when said by a white or non-black person.

"When you're black, it changes the whole way people perceive you and people look at you," one student said, according to TImes-Picayune. "Realize that it's not just a word when you say stuff like that. Realize all the charges and all the connotations it has in it ... and just make responsible choices. If you're a teacher and you don't want to get fired, maybe you don't want to say this."