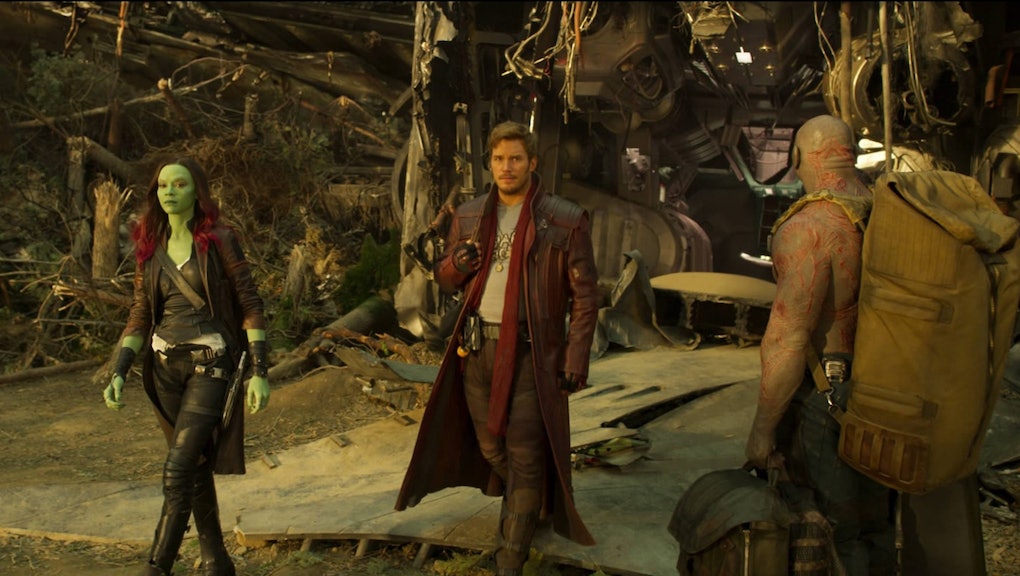 How does 'Guardians of the Galaxy Vol. 2' connect to 'Avengers: Infinity War' and the MCU?

Since the Guardians of the Galaxy movies largely exist in the cosmos, their connections to the greater Marvel Cinematic Universe is a lot smaller than some of the other films. That's not to say that Guardians of the Galaxy and its sequel are not connected at all to the MCU. After all, it is the first film that expands on Avengers villain Thanos.

Like its predecessor, Guardians of the Galaxy Vol. 2 is largely a stand-alone film, with only minor connections to the MCU. What Guardians of the Galaxy Vol. 2 does, though, is set up possible cosmic storylines in subsequent films. And despite it being confirmed that the sequel would not set up Avengers: Infinity War, that may not entirely be the case.

[Editor's note: This article contains spoilers from Guardians of the Galaxy: Vol. 2.]

In the first Guardians of the Galaxy, we learned that Gamora and Nebula were both stolen from their families and adopted by Thanos. Part of their backstory is expanded on in Vol. 2, in which Nebula explained that her adopted father forced her to fight Gamora, and every time she lost, he replaced one of her body parts with machinery.

At one point in the film, Nebula makes it her goal to first kill Gamora, and then go after her adopted father. In some ways, Vol. 2 is truly a film about family, and the final half the movie does show a quasi-reconciliation between Gamora and Nebula. And though Gamora asked her sister to stay with the Guardians and fight for the greater good, Nebula decided to leave in search of Thanos.

So, how does this tie into Infinity War? Well, it is not entirely clear. But what is known, is that the Guardians of the Galaxy will appear alongside the Avengers in Infinity War. One of the characters that will be appearing is Nebula. If Nebula does not show up on Earth, or meet the Avengers with the Guardians, it is possible that she will turn up in Infinity War because she has been searching for her father.

Guardians of the Galaxy Vol. 3 and beyond

It was recently revealed that James Gunn will return to write and direct a third installment in the Guardians of the Galaxy franchise. And while it is not entirely clear what the plot of that film will be, especially because it will likely arrive after the next two Avengers films, it would not be surprising if it builds on some of the teases from Vol. 2.

Two of the best Easter eggs from Vol. 2 could very well be setting up either future Guardians movies, or other films exploring the cosmic side of the Marvel universe. Those two Easter eggs are the inclusion of the original Guardians of the Galaxy and Adam Warlock.

Early on in Vol. 2, Yondu has a brief confrontation with a Ravager named Stakar Ogord, played in the film by Sylvester Stallone. Stakar Ogord, aka Starhawk, just happens to be a one-time member of the Guardians of the Galaxy in the comics. And in one of the (many) post-credit scenes in Vol. 2, Starhawk reunites with his former team members, including Martinex T'Naga, Charlie-27, Aleta Ogord, Mainframe and Krugarr.

What is really interesting, is this may not be the last time we see these characters. Director James Gunn told the Toronto Sun that it's his plan to see Stallone's Starhawk, and the rest of the old Guardians, in subsequent films. While he would not confirm whether that would be as early as Guardians of the Galaxy Vol. 3, it does sound like they could play a role in future films within the Marvel Cosmic Universe — which Gunn has been discussing with Marvel chief Kevin Feige.

As for Adam Warlock, it is expected that he will be a big part of the Guardians universe going forward (though likely not as early as Avengers: Infinity War). Adam is mentioned in one of Vol. 2's post-credit scenes as a creation of Ayesha. His initial purpose, it seems, is to track down the Guardians so they can be punished for their indiscretions.

It is certainly possible that Warlock could start off as one of the villains in Guardians of the Galaxy Vol. 3, before joining the team, as he has in the comics. It is also worth noting that Adam Warlock is often closely associated with the Infinity Stones, so it would not be a stretch to see him show up in a brief cameo in Avengers 4. That, though, is pure conjecture. Of course, the Avengers could use all the help they can get stopping Thanos.

Guardians of the Galaxy is now playing theaters.