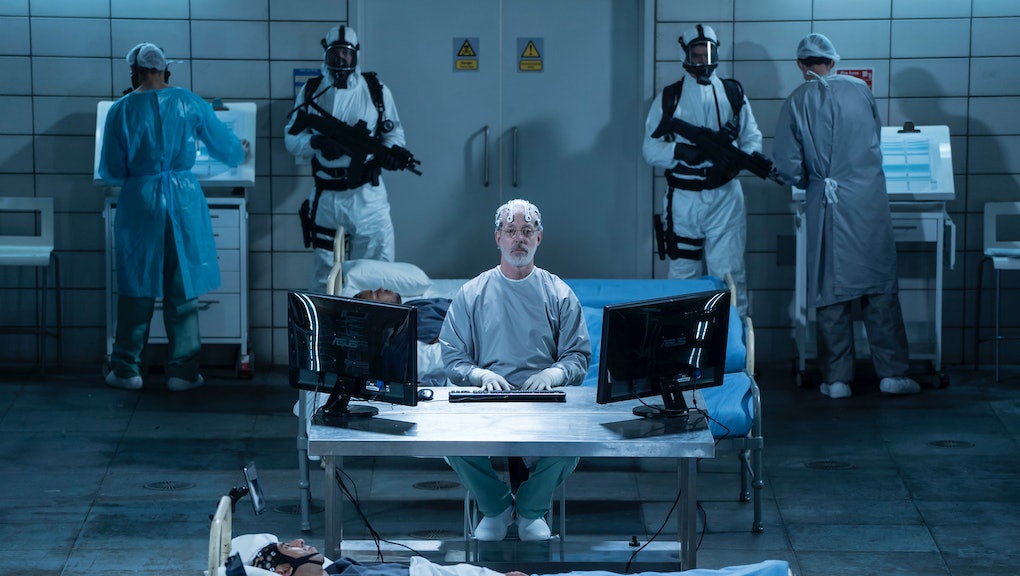 The season two premiere of Sense8 picks up right where we left off in December, with Will and Whispers tracking each other through their psychic connection.

(Editor's note: Spoilers ahead for the season 2 premiere of Netflix's Sense8.)

In the opening scene, Will sees Whispers leading an experiment in which he takes control of a sensate — presumably a normal human before Whispers performed a "neural graft" on him — and commands the normal-cum-sensate to murder a lab assistant in front of an audience of shocked suits. As the sensate killer is about to hit his mark, a memory of Angelica begs Will to stop the murder. Will then has a flashback to a tender Angelica/Whispers moment. Angelica had expressed second thoughts about the neural graft procedure, but Whispers convinced her that his intentions were only to make humans less afraid of sensates.

So why did Whispers go rogue and turn his neural graft experiments into a display of sensate violence? It seems that having a sensate murder a human would make humans slightly more afraid of them. Whispers could be the reason that Biologic Preservation Organization decided that sensates were threats and targets. But why does he hate sensates like himself so much that he wants BPO to start hunting them? And what future plans does he have for sensate soldiers?

In the final season two trailer, we caught a glimpse of a new group of sensates, who we can reasonably presume are working for Whispers — but they don't show any signs of neural graft surgery. Either they've joined him voluntarily, or he has perfected a cosmetic procedure for covering up neural graft scars. Whatever the case may be, he seems to be rounding up sensates to use for violence, and the American government is not the type to pass up an opportunity to acquire a giant zombie army of mindless drones who kill people. Perhaps this is all part of a larger military operation?

There's a lot to unpack here, but we should be thankful that season two of Sense8 jumped right into the thick of things. In addition to ramping up the conflict between Whispers and the O.G. sensates, the season two premiere checks in with Lito, who is adjusting to life as an openly gay actor. Kala, on the other hand, is getting used to her new family, while Wolfgang has become a ... club kid? We also learn a little more about sensates, aka Homo sensorium, who were believed to have been an evolved race of superhumans wiped out by normal humans. (A professor dubbed it "mass genocide," which is extra.)

The episode ends with Will and his buddies pinpointing Whispers' location, so we can expect plenty of thrilling chess moves in the near future.