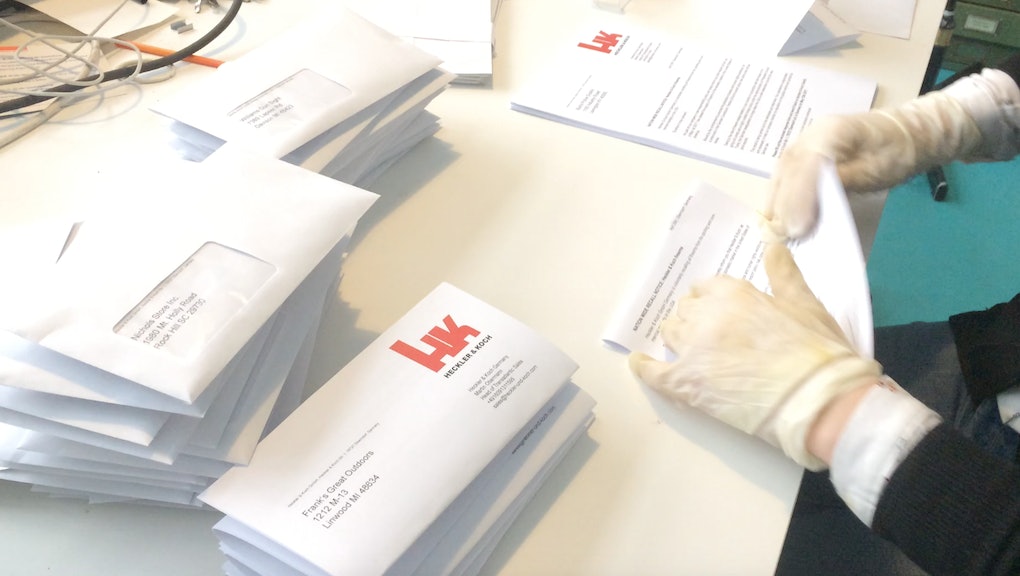 Earlier this week, 200 U.S. vendors of guns made by Heckler & Koch, a massive multimillion dollar international arms manufacturer, received letters purporting to come from someone named Martin Obermann, whom the official-seeming letterhead identified as Heckler & Koch’s Head of Transatlantic Sales.

Recipients were notified that, as of May 1, the international arms giant had "ceased the supply of firearms to the domestic market in the United States of America" and had begun "voluntary recalling all firearms from the sporting and commercial markets in the USA."

"Owing to the rise of firearm-related deaths in your country in conjunction with the threat of ongoing civil unrest and a highly volatile foreign policy under the administration of President Donald Trump, the German headquarters [of Heckler & Koch] no longer deem the USA a safe destination country for weapons export," the letter — which claimed to come from an arms manufacturer whose guns have reportedly been used by the thousands in the Syrian conflict — said.

To confused shop owners in the U.S., the letters appeared to be the real deal. The link at the bottom pointed to a near-perfect facsimile of the Heckler & Koch website. The functioning phone number listed connects callers to a woman claiming to be a secretary and offering assistance in surrendering Heckler & Koch weapons.

But there is no Martin Obermann at Heckler & Koch — the recall notice was a well-executed prank carried out by the Peng Collective, an anonymous squadron of pacifist artists whose previous victims include the Associated Press, Fox News and the New York Times. On a homepage that appears to parody the clinically slick aesthetic of Silicon Valley startups, Peng boasts that its members "use weapons of mass disruption to deliver radical messages."

In the case of Heckler & Koch, the only weapon they needed was snail mail to get the gun goliath's attention.

Though the prank only targeted 200 vendors in the U.S., the company posted a bulletin on its international website in both German and English warning confused customers that the Trump-inspired recall was, in their words, fake news.

In an official statement issued on Friday, Heckler & Koch assured customers that it would not be withdrawing from the U.S. market, characterized Peng's prank as an "insidious attack" and said it would be working with German law enforcement to figure out who was behind it.

Internet hubs for American gun aficionados also made pains to alert visitors on the fake recall. The Firearm Blog posted a scan of the letter emblazoned all over with the word "FAKE" in red print.

Jimmyguns69, a member of a message board for people who love Heckler & Koch's weapons, mused that the prank likely came from a supporter of German Chancellor Angela Merkel.

Despite Heckler & Koch's efforts to let everyone know they were being duped, the damage had been done. Shortly after the prank's victims received the bogus recall notice, members of Peng, posing as employees of the manufacturer, began to contact the letter's recipients. One vendor, though seemingly confused by the premise that Donald Trump's America had grown too volatile a nation for a German company to ethically conduct business, was willing to comply with the recall.

But not every vendor targeted by Peng was so easily fooled: EuroOptic, an online retailer with an address in Pennsylvania, posted on its site that the prank was "an epic hack" and congratulated the people behind it for its execution.

"Whoever did this should get into legitimate ventures, because it certainly looks like it took a ton of work to pull off," EuroOptic said in a blog post.

"We're very happy with the response [our prank] is getting," one of the members of the German collective behind the fake recall notice said. "You know in life, when something is taken away from you, it always touches you in a way. And [guns] are something that should be taken away from them."

"When the allies came to Germany after the war, they taught us pacifism," they said. "We want to send this pacifism back to the United States as our way of saying thank you — because you need it."

Another artist at Peng said he contacted a Heckler & Koch spokesperson posing as a gun store owner who was nervous about having to give back his guns. When the representative confirmed that the recall was fake, he expressed his relief, telling the rep that he'd felt unsafe in his neighborhood because more black people and immigrants were moving in, and that he was happy he wouldn't actually have to surrender the firearms back to the German manufacturer.

According to the impostor gun salesman, the Heckler & Koch representative apologized for causing any anxiety and informed him that the company was "the victim of an attack."

"I couldn’t believe the audacity," the Peng member said, "That a weapons manufacturer would call themselves the victim — it's crazy."

A spokesman for Heckler & Koch declined to comment on the story, citing concern over whether the reporter who called was actually a representative of Mic.