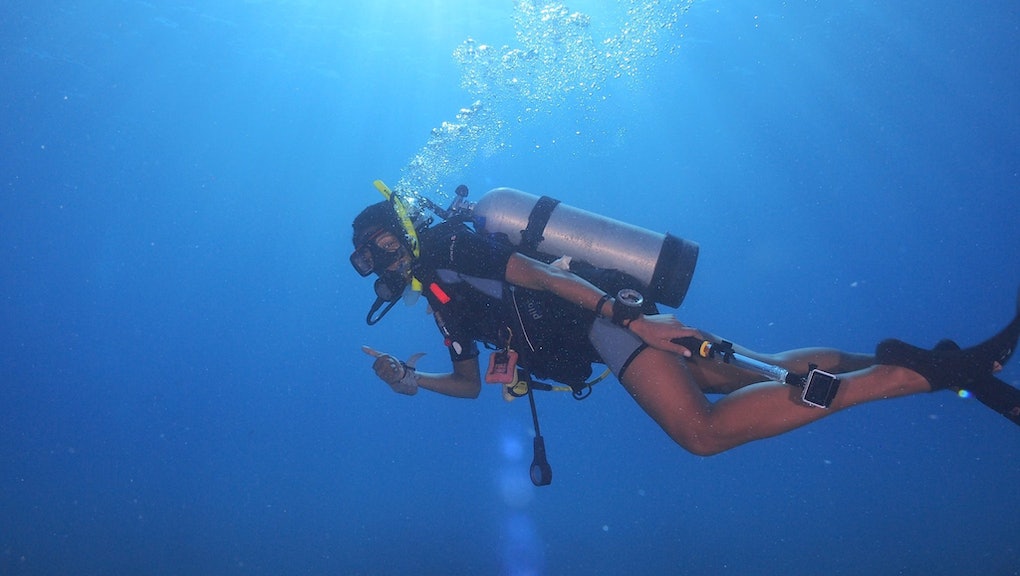 Scuba diving while black: Why the underwater adventure is even more challenging for people of color

In my first attempt at getting certified to scuba dive, I found myself throwing up off the side of the boat in the waters off the Algarve region of southern Portugal. It wasn’t fear, but seasickness — the Atlantic Ocean was rough that April, after it had been hit with a series of storms days before my diving excursion.

As an adventure lover, I’ve trekked to see endangered silverback gorillas in the mountains of Rwanda; biked the countryside of Myanmar; and hiked the spectacular landscapes of Patagonia. My love of animals extends to both land and marine, and I knew I needed to be a moderate swimmer if I wanted to dive in bucket list paradises like the Galapagos, the Maldives and Papua New Guinea.

Before my trip to the Algarve, I spent two months at my local YMCA taking swim lessons to boost my almost nonexistent swimming abilities. Although I took swim lessons for a summer as a teen and became quite proficient, I lost confidence in my abilities as I grew older. I now see the value of taking part in activities like jet skiing, snorkeling and sailing — and knowing you have more control in the water in case of emergencies.

The stigma of water and swimming in the black community is real. We don’t have a huge marine presence, perhaps because of lack of representation from black icons and celebrities in national swimming leagues or at the Olympics. There’s also a widespread concern over women’s hair health being impacted by the chlorine in pools and salt in the ocean. Add on the reasonable danger of breathing oxygen from a scuba tank at depths the equivalent of an eight-story building, and there aren’t many of us signing up as divers.

The stigma of water and swimming in the black community is real.

I set out to achieve my Professional Association of Diving Instructors Open Water Diver certification in the Algarve with my instructor, Renato Anjos from the Subnauta dive shop, who saw my brave exterior and thought I could handle diving in the murky Atlantic Ocean. The visibility of the water was zero and it seemed as if we were dropped into a cloudy bathtub. After anchoring at the Pedro do Alto dive site, I descended under water with Renato, with a vice grip on his arm until we reached the sandy bottom at 30 feet.

The tasks I needed to accomplish to become certified — take my mask off, put it back on, clear it of water; demonstrate a neutrally buoyant Buddha pose; practice taking my regulator in and out of my mouth — were mostly a fail. I was terrified. The water was murky, the marine life sparse. After exiting the dive early, the huge waves of the Atlantic led me to become sick.

I didn’t give up — the following year, I successfully became certified in the Turks & Caicos with the Club Med Turkoise dive shop. The water in Providenciales was the most beautiful aquamarine — just by sticking my head in the water, I could easily see down to 80 feet of visibility. The calm water and excellent clarity at the Piranha Cove and Crocodile dive sites made demonstrating the required certification tasks much easier to accomplish.

Since Turks, I’ve been obsessed with diving and have explored reefs in Nicaragua, Honduras, Barbados, Bermuda and Key Largo, Florida. When I travel, I figure out whether I can dive there, then I do research into the historic shipwrecks, unique corals, and marine life native to the destination. In Corn Island, Nicaragua, I dived the Constellation and Lily Reef dive sites with the Corn Island Dive Center. I was traveling with my friend, Andrea, who chose to lay out by the hotel pool until I returned. She is one of the few black friends I have who is a great swimmer and ocean lover — but when I asked her if she would consider getting certified, she was interested but noncommittal.

Scuba diving is a big social activity. I recently dived with a group of 10 Brazilian friends who traveled to the Bimini district in the Bahamas to dive with hammerhead sharks (Neal Watson’s Bimini Scuba Center organizes hammer safaris) — one of the only places in the world where the sharks migrate in large numbers during the winter months from November to March. I enjoyed getting to know the group, but would have loved to experience a life-changing event like that with my own friends. Getting a group of friends together for a warm retreat usually means I will be the only one diving — snorkeling is about as far as they go because of the perceived tediousness of getting certified to dive and lack of confidence in the water.

While searching for more opportunities for diversity in the sport, I recently came across a black diver’s organization headquartered in Washington, D.C.: the National Association of Black Scuba Divers, which has 16 active clubs around the country and 3,000 dive members since it started in 1991. “To combat the lack of acceptance of black divers half a century ago, Underwater Adventure Seekers became the founding club of NABS in 1951,” NABS president Kamau Sadiki said in a phone interview.

Sadiki said most of NABS’ recruitment efforts are done at dive shows and through local clubs. Some clubs do direct outreach on their own, and others work with community-based partners with youth programs, like Boys and Girls Clubs and YMCA.

“Currently our primary challenge is an aging membership and attempts to attract millennials, but we are currently putting together a strategy to connect with the younger demographic,” Sadiki said. He is currently focused on underwater archeology with Diving with a Purpose, where the members bring artifacts from slave ships back to the surface to be documented and archived.

This is the type of dive I aspire to be part of in the near future: One that seeks to conserve my heritage, during which I can learn important skills in marine archeology and ocean conservation at the same time.