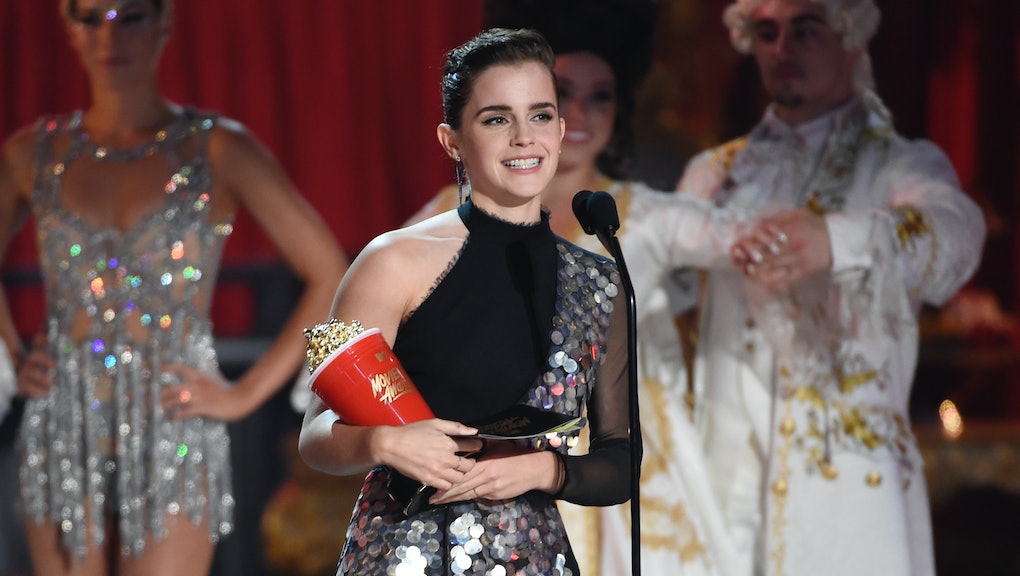 In its first year of having gender-neutral performance of the year categories, Sunday night's MTV Movie and TV Awards saw two women crowned. Stranger Things' Millie Bobby Brown took home best actor in a show, while Beauty and the Beast's Emma Watson claimed the trophy for best actor in a movie.

Say what you will about the choices made; calling Watson the best actor of the year is quite a statement. But through a fan vote, MTV's awards managed to produce two female winners. Considering how skewed against women online voting for films and TV shows can be, that's impressive.

But it also does not change how imperfect a solution genderless acting categories are. One pair of categories at one awards show does not make for a surefire solution. There are still too many potential issues at play, including the potential for gender bias.

As Watson was giving her speech, she accidentally dropped one whopper of a misstatement: "This is the first acting award in history that doesn't separate nominees by their sex." This, of course, is simply untrue; the Critics' Choice Awards have given out a gender-neutral young performer prize for years, while the Television Critics Association gives out genderless "achievement" prizes in different genres.

Watson was likely trying to emphasize the historic nature of the lack of gender divide, and in doing so, oversold the case. But in spirit, she's not wrong; critics' prizes are a different breed of award. They come from people who ostensibly watch everything, and have discussions with each other about what's best.

Compare that to, say, the Oscars, which are voted on by a membership that often doesn't have time to see everything — nor are they required to to vote. As Variety critic Guy Lodge noted on Twitter, male Oscar-nominated performers often come from more high-profile films, usually best picture nominees. In 2017, for instance, four of the five best actor nominees performed in best picture contenders. Only one of the best actress nominees did: winner Emma Stone.

Combined with the Academy of Motion Picture Arts and Sciences' overwhelmingly male membership, it's hard to see the Oscars consistently striving for gender parity. It would be truly disappointing to see, for example, Cate Blanchett's stunning work in Blue Jasmine go ignored because voters were more compelled by Matthew McConaughey's Dallas Buyers Club performance and renaissance narrative.

Even if we forget other awards shows and just focus on the MTV Movie and TV Awards, the genderless categories are still problematic. With all due respect to Watson, calling her somewhat divisive performance in Beauty and the Beast the best of the year feels like a misstep. But Watson has a large fanbase; it's easy to see why she won a fan vote. Fan favorite is not the same as qualitative best, though, and it's easy to foresee plenty of problems ahead. Like, will Harry Styles win the prize next year for his work in Dunkirk?

The easy solution to this is just to change the category name to "favorite actor in a movie," to reflect the truth of it. But gendered acting categories do give voters two chances to highlight great work. Had the categories been split this year, Hugh Jackman might have won the male variant for his truly exceptional work in Logan. Watson's win would still feel suspect, but it wouldn't be as broad a declaration on the voters' part.

Gendered acting categories are a problem, and there is a solution somewhere. But as surprising as the MTV Movie and TV Awards' winners are, they don't offer a definitive answer. The dialogue must continue beyond this one awards show.