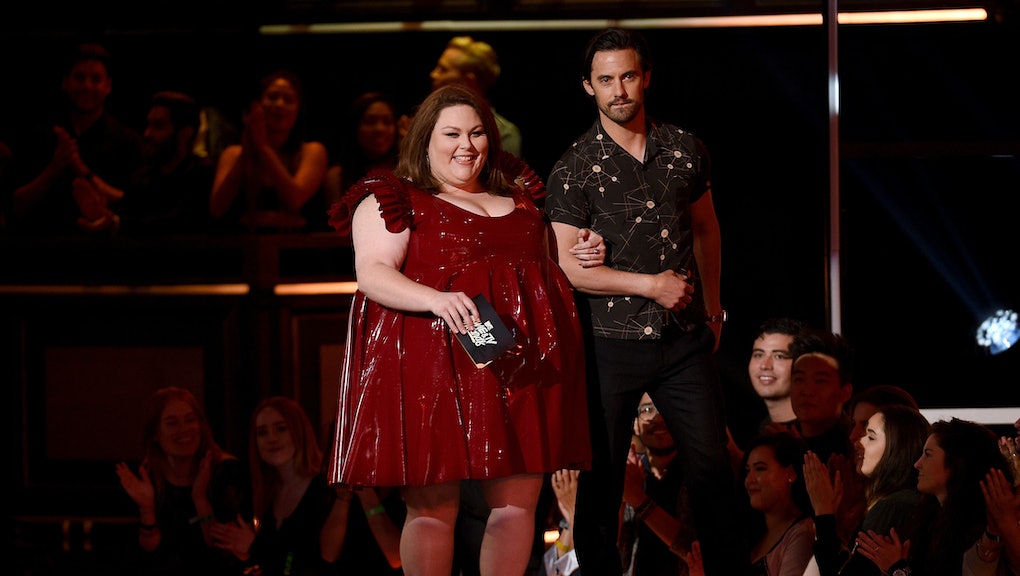 Chrissy Metz, who plays Kate Pearson on the NBC drama This Is Us, wore a bold, yet awesome dress to the 2017 MTV Movie and TV Awards on Sunday night. Unfortunately, her outfit of choice received some negative attention. The dress — a maroon latex babydoll — was praised by fashion publications like Cosmopolitan, but the actress was still attacked by body shamers.

Metz, however, was not about to let a few haters ruin her night. She took to Twitter and casually shut them down with this matter-of-fact tweet.

Her fans immediately came to her defense, singing her praises, and daring these alleged critics to step forward and receive a public flogging.

While Metz obviously has a ton of confidence and a loving, supportive fan base, that doesn't mean body shamers don't get to her. She's especially sensitive to people who are definitively not overweight being shamed, as she explained to People following the massive amounts of criticism Lady Gaga received for her Super Bowl half-time costume.

"How is someone fat if they're not fat?" Metz asked. "I wanna see somebody else get on that damn stage and do what the hell she did."

Metz, much like her character on This Is Us, has a tricky relationship with weight, and is trying to practice a healthier lifestyle. However, as she explained in a Marie Claire interview, she doesn't believe being overweight has any impact on overall beauty.

Size doesn't equate to beauty. I don't understand why that's a thing. Well, I do, because the media has told us thin is beautiful. But is it? Because I think people are miserable not eating and smoking cigarettes.

In line with that, Metz went on to say she hopes more designers will want to represent her on red carpets, and that she'll eventually be up for roles that don't denote an overweight person in the description. Until that time, however, she's determined to keep her confidence up, and haters in check.

"Contrary to the bill of goods you've been sold, life is not a competition," Metz wrote in a letter to herself for People. "Stop comparing yourself to anyone or anything."

Mic has ongoing This Is Us coverage. Follow our main This Is Us hub here.