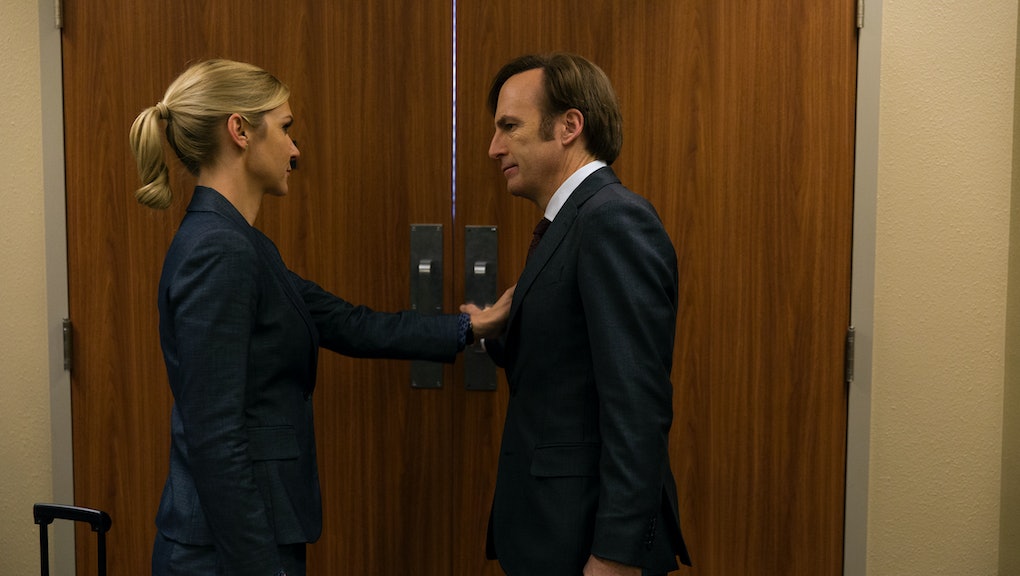 It's the courtroom episode of Better Call Saul in season 3's fifth installment, "Chicanery." And for those among us who are most invested in the legal drama of the series, it's practically the Super Bowl. Jimmy and Chuck square off in court over Jimmy's confession to tampering with evidence in the Mesa Verde case — lest we forget, Jimmy going apeshit and destroying one copy of the tape with two witnesses in the next room — and wouldn't you know it, Jimmy's got a plan to take down Chuck. It does, of course, involve some chicanery.

It's not surprising that Jimmy had something up his sleeve. The show has precipitously teased Jimmy's deception for most of the season but kept viewers in the dark on the specifics of his scheming. What we did know is Jimmy and Kim were very confident about their plan, which involved Mike Ehrmantraut posing as a handyman and taking photos of Chuck's apartment, working.

That made the reveal on "Chicanery" all the more effective, and thanks to a familiar face from Breaking Bad, Chuck unraveled in court so disastrously it's hard to imagine him taking down his brother without resorting to the same tricks. #SlippinChuck confirmed?

To understand Jimmy's motivations, we get another flashback, this time, it's Chuck's ex-wife Rebecca making a trip to New Mexico to visit him. Jimmy is basically playing wingman here, helping Chuck with everything from the house to dinner to the decision his old wedding ring or not. We do learn, eventually, that Chuck hasn't revealed his condition — a hypersensitivity to electricity that hasn't been medically diagnosed — to Rebecca and uses issues with his electric bill as an excuse for a candlelit dinner. Chuck's doing rather well. In fact, he's getting more than a polite chuckle out of her. It's only when she answers a phone call that things quickly fall apart and soon she leaves the house despite Jimmy's pleas.

It's an important reminder of just how vital Jimmy was to Chuck's life. He was his caretaker once the condition worsened, and for all his faults, the dude certainly hustled. He was working in the Hamlin, Hamlin & McGill mailroom, took care of Chuck and earned his law degree on the side. (Okay, it was an online degree from the University of American Samoa, but still!) That's why Chuck became public-enemy number one for Better Call Saul fans when he prevented Jimmy from becoming an associate at HHM. He's the most hated member of the Breaking Bad universe since Skyler White.

But for all of Chuck's transgressions — particularly, failing to tell Jimmy about their dying mother's final words out of jealousy, which is unforgivable — we need to remember that Chuck is legally in the right here. Jimmy did tamper with evidence and break the law, even if his heart was in the right place by trying to help Kim. Chuck said it best in court, "He has a way of doing the worst things, for reasons that sound almost noble."

But there's nothing noble about Jimmy's deception in court; it's just cruel. He first gets Rebecca into the courtroom as a spectator, which ruffles Chuck while he's on the witness stand. Up until that point, she still had no idea about her ex-husband's condition. Now it was in plain sight. The courtroom's lights were off. The clock was removed. And all cellphones and electronics were tucked away in another room. The only surge of electricity: the exit signs. She pities him, mostly, and Jimmy assures that he brought her there out of brotherly concern. Jimmy's not under oath here, but yeah, that's some B.S.

However, it turns out Rebecca is just a red herring to Jimmy's plan. It would've worked with or without her in the courtroom, and she's just there to make the moment more painful for his brother.

Jimmy makes a convincing case that Chuck's condition — and the symptoms that come with it, mostly intense physical pain around electromagnetic waves — is actually a mental illness. He proves this by taking out his cellphone, telling the court that he's had it in his pocket the whole time and Chuck hasn't reacted to it. Chuck calls Jimmy on his bluff: The battery was removed. But then he asks Chuck to reach into his breast pocket. Sure enough, the battery's been on Chuck's body for the better part of the hearing.

How did Jimmy pull this off? Amazingly, it was through Huell Babineaux, the man who will eventually become Saul Goodman's rather incapable personal bodyguard in Breaking Bad, thanks to a recommendation from Mike's shady vet associate, Caldera. With an impressive sleight of hand, Huell slips the battery into Chuck's pocket when he bumps into him inside the courthouse. Chuck's had electricity exposed right next to his skin the whole time, and it's only when he pulls it out that he flips out.

Exposed, Chuck spurts out a vitriolic verbal tirade at Jimmy, reminiscent of Jimmy's explosion at Chuck earlier in the season. This one's much less flattering, however, in the eyes of a courthouse and his ex-wife, who are all agape. His smear campaign of Jimmy is over, and presumably, any attempts at reviving his legal career at HHM.

Despite this setback, however, I don't think this means that Chuck won't no longer be a problem for Jimmy. Rather, this might send Chuck spiraling into even more desperate avenues to take Jimmy down, which, ironically, would make him exactly the type of person he's trying to destroy. With that in mind, who else is ready for Slippin' Chuck?