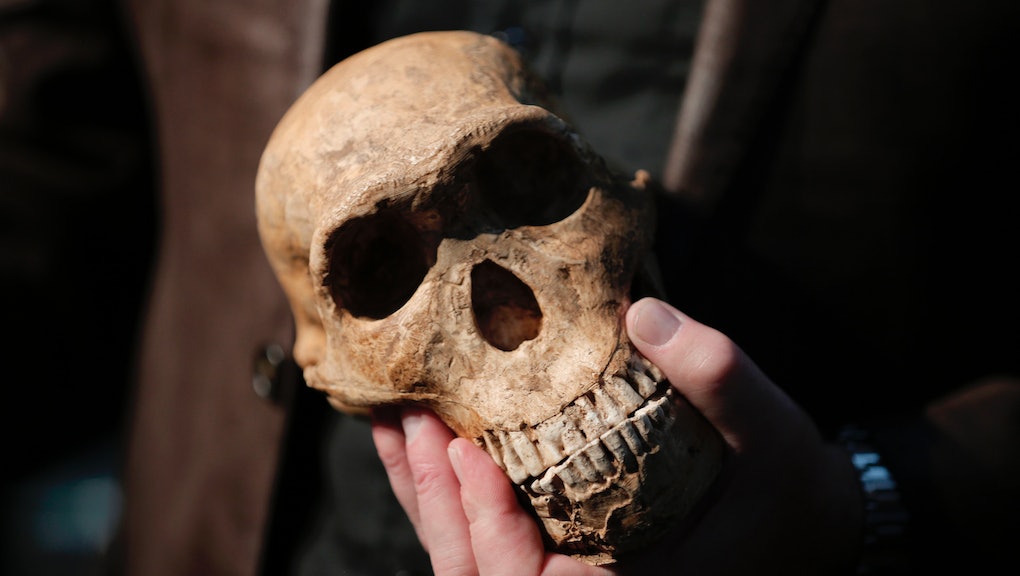 In 2013, two recreational cavers accidentally stumbled upon pieces of human history while exploring the Rising Star cave system at the Cradle of Humankind World Heritage Site in South Africa.

Located 100 yards from the cave entrance is the Dinaledi chamber — a 30-foot long chamber somewhere between 2 million and 3 million years old — where more than 1,500 fossil fragments of 15 hominin skeletons were found buried in ancient clay. After a month of excavation and two years of analysis by international experts, a verdict was made: The fossil remnants belonged to a previously unknown species related to humans, dubbed Homo naledi.

Now, the scientists behind the discovery have made another finding regarding the species' timeline.

Due to the age and condition of the bones, traditional dating methods like radiocarbon technique or DNA extraction could not be used to date the fossils, the Washington Post reported. Instead, the scientists analyzed the Naledi teeth and radioactivity in the cave to date the fossils "back to between 236,000 and 335,000 years ago."

The revelation suggests Homo naledi was alive at the same time as several species of ancient humans. Based on the timeline, Homo naledi co-existed with other hominin species like the Homo erectus in Asia; the large-brained Homo heidelbergensis in Africa and Europe; Neanderthals; and the Denisovans, according to the Post.

"This is a humbling discovery for science," Lee Berger, an American paleoanthropologist at the University of the Witwatersrand in Johannesburg, told the Post. "It's reminding us that the fossil record can hide things ... We can never assume that what we have tells the whole story."

The team that excavated the Dinaledi chamber went back into the cave system in 2015 to explore a second chamber called Lesedi. The cavern contained more than 130 hominin bones from at least three Homo naledi individuals, one of which is an adult male they're calling "Neo." The Lesedi findings add merit to a theory the scientists developed after the Dinaledi discovery: Homo naledi took part in the ritualized disposal of bodies.

"One, perhaps, was a singular event," Berger said. "Two is not a coincidence."

Prior to this, it was believed only Neanderthals and humans intentionally buried their dead. In the case of Homo naledi, other experts note there's still a possibility the remains ended up in the cave naturally. If the Homo naledi did deliberately engage in burial rites, it would imply the species displayed advanced behavior relating to emotion and grief.

"It's enormously surprising to see a very primitive member of the genus, not very humanlike overall, to do something unique to humans," Berger told the Post in a 2015 interview. "To see it in a small-brained hominid is completely surprising. None of us expected it."

The juggle between the primitive and modern nature of Homo naledi goes beyond burial traditions and tools. From the get-go, the species exhibited conflicting traits.

On one hand, it has a small brain roughly the size of a gorilla's, primitive ape-like shoulders and torso, and long and curved fingers, the latter giving the species the ability to climb and swing from trees. These features are more similar to Australopithecus ancestors, who lived between 3.85 million and 2.95 million years ago in Eastern Africa, than modern-day humans. But its dexterous wrist bones suggest Homo naledi could have used tools; its small teeth imply a diet similar to more recent human ancestors; and its long legs and feet mean the species walked upright.

As for what's next, Berger's team is headed back to the caves to find evidence of stone tools and symbolic behavior, Science Magazine reported.