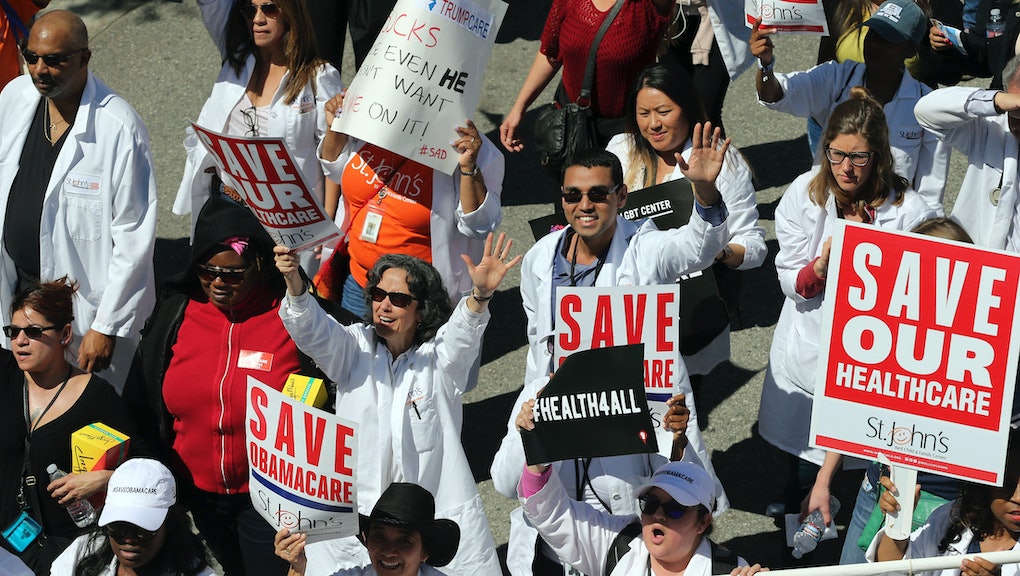 As Republicans face a spate of angry constituents and negative press after passing the American Health Care Act, at least one GOP pollster is calling the predictions of GOP doom in the 2018 midterms premature.

"Immediately after the House voted to repeal significant portions of Obamacare, the typical media players began proclaiming that this would be a killer for Republican candidates in 2018," GOP polling firm WPA Insights wrote in a polling memo, as reported by the Washington Examiner. "But WPA Intelligence's models of support for Obamacare and support for replacing it with a market-based solution that lowers costs tell a very different story."

Still, the WPA Insights findings paint an overly rosy picture of the impact of the AHCA vote, which Republicans are branding as their repeal and replacement of the Affordable Care Act, aka Obamacare.

The most glaring problem? WPA Insights asked whether voters support a generic ACA replacement, which "reduces regulations, cuts taxes and increases choice," but failed to offer any specifics on how a government would achieve those ends; that kind of generic replacement simply doesn't exist.

"I think repeal and replace effectively energized Republicans because everyone agreed on what they were against without having to agree on what they were for," Nathan Gonzales, a non-partisan analyst at Inside Elections, said of a generic ACA replacement, adding that he dislikes "polling generic things, because things aren't generic."

What does exist is the AHCA, an extremely unpopular piece of legislation that the nonpartisan Congressional Budget Office has said will cause 24 million people to lose insurance and hike prices for low-income and older Americans.

Those factoids are easily demonized in ads — which Democratic groups are already running against Republican House members who voted for the bill.

"How could you do this to us?" one six-figure ad buy against 24 Republicans who voted for the AHCA says, after showing easily identifiable groups such as AARP and the American Cancer Society oppose the bill.

Already, a HuffPost/YouGov poll found just 31% of Americans support the bill, with another 39% saying the AHCA would make the health care system worse. Those numbers are abysmal — lower than the ACA ever polled.

Some Republicans in particular fear that the post-AHCA passage celebration in the White House Rose Garden will show up in attack ads that could hamper GOP hopes in the midterms.

"Many of us in the GOP grumbled to one another when we saw this, because we knew the celebratory images coming from the Rose Garden — the laughing and yukking it up — were going to be used in campaign ads against vulnerable Republican incumbent House members," Evan Siegfried, a Republican strategist, said in an interview. "Democrats are going to do split-screen ads showing the Republican Congress laughing and celebrating with a mother holding a sick child with worry in her eyes being barred from entering the emergency room. It's effective, emotional and dangerous for us."

Even more concerning for Republicans is that GOP candidates running in a handful of special elections across the country are steering clear of AHCA talk, with many candidates either refusing to publicly back the bill or avoiding discussing the legislation altogether.

Greg Gianforte, a GOP politician running in a special election in Montana's at-large House district, only admitted he supported the AHCA behind closed doors. Meanwhile, two Republicans facing a runoff primary election in a vacant South Carolina House seat have made no mention of the AHCA at all.

After seven years campaigning on the promise to repeal the ACA, the deafening silence on the AHCA is a sign Republicans are not confident the House's solution is good politics.

And the few Republican members of Congress actually holding town halls following their AHCA votes are already seeing angry constituents pepper them with questions about their vote.

Rep. Elise Stefanik (R-N.Y.) faced a tense audience at a town hall in her Upstate New York district over her health care vote. While Rep. Rod Blum (R-Iowa), a top Democratic target in the 2018 midterms, faced a vocal town hall crowd angry about his vote for the AHCA.

It's a call back to the Tea Party-fueled rage that characterized the ACA town halls in 2009.

Yet Republicans saying the AHCA vote won't hurt them is not only premature, but unsupported by the evidence.