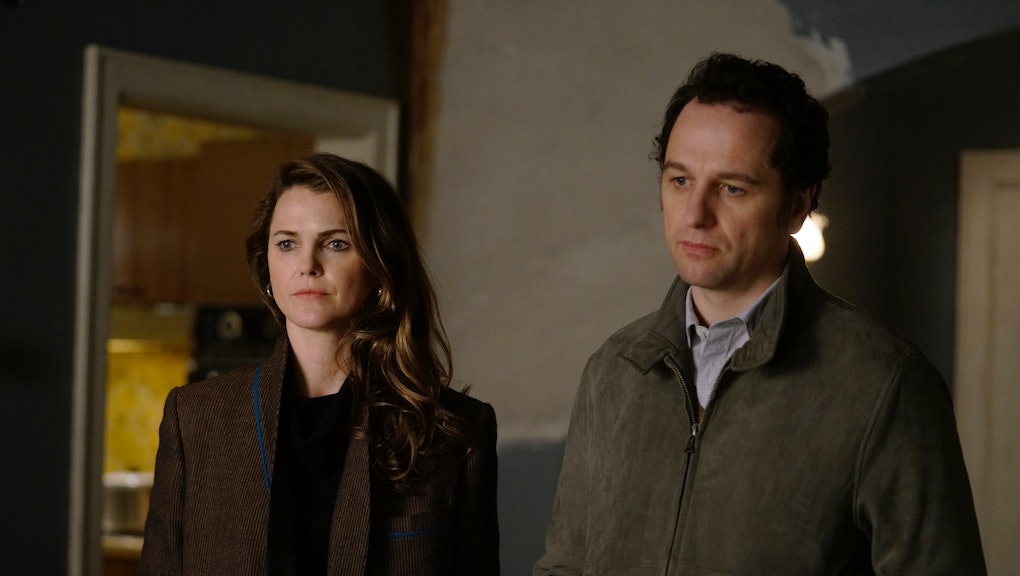 'The Americans' Season 5, Episode 10 Recap: Honeymoon in the "Darkroom"

How do you celebrate a clandestine wedding ceremony when you're a pair of Soviet spies? If you're Philip and Elizabeth Jennings, you pore over the private thoughts Pastor Tim wrote about your daughter in his diary — under a color-appropriate red light.

It's episodes like "IHOP" and Tuesday's "Darkroom" that make The Americans' slow burn worth all the suspense. That's saying a lot for this show, especially since "Darkroom" didn't feature any huge plot bombshell. However, its two big scenes were important for the series' overall story arc, because at its core, The Americans has never been about the Cold War — but what it means to be a family.

When the show began, Philip and Elizabeth had already been living as a married couple in the United States for 16 years. As early as the series premiere, though, the tension in their relationship — the forced intimacy, accelerated by government orders rather than genuine affection — was obvious to viewers. But over the past five seasons, we have observed the Jennings' marriage grow into one of love and respect, punctuated by watercooler-worthy moments of rough sex and one strangely sensual tooth extraction.

It's been stunning to watch, but as viewers have noticed in season five, the stronger the Jennings' marriage, the harder it's been for them to carry out their assigned tasks — specifically, their respective honeytraps of scientist Ben Stobert and logistics manager Deirdre Kemp.

So, when Claudia tells Philip and Elizabeth they must continue running Stobert and Kemp for the foreseeable future because of the time it will take to analyze the wheat sample the Jennings procured a few episodes ago, the KGB officers don't even try to hide their disappointment.

These two need to do something to reaffirm their commitment to each other and maintain focus on their mission going forward — and Philip knows just the man for the job.

In what is probably one of the show's most romantic gestures, Philip arranges a secret wedding ceremony for himself and Elizabeth through one of Gabriel's former assets: a Russian Orthodox priest "from home" named Father Andrei.

For all the flashbacks in The Americans, the one thing audiences were never sure of was whether Philip and Elizabeth were actually married. They said they were when Paige asked them shortly after learning their real identities in the third season, but in "Darkroom," viewers found out it wasn't exactly true. Turns out the closest Philip and Elizabeth ever got to a real wedding ceremony was when Philip, under his "Clark Westerfeld" alias, married Martha in season one, and Elizabeth posed as Clark's sister.

As we learn via a new flashback, the Soviet spies were given a marriage certificate along with various forms of ID prior to leaving Russia, but they never exchanged vows.

That all changes in episode 10, when Philip takes Elizabeth to an abandoned building in the dead of night and surprises her with a full Russian Orthodox wedding ceremony performed by Father Andrei. For several sweet minutes, these two are Mikhail and Nadezhda once again, as the priest uses their real names and their mother tongue for the entire ritual. It's a delicious taste of home for the couple, and while we don't hear Keri Russell or Matthew Rhys speak much Russian — their dialogue amounts to "Yes, Father" and "No" — you can see how comfortable Elizabeth and Philip are as they listen to someone speaking Russian without having to pretend they have no clue what they're saying, like with the Morozovs.

Another thing Elizabeth is unexpectedly comfortable with in this scene? The religious element. Having grown up as a loyal Marxist in the Soviet Union, she's made her disgust for religion quite clear throughout the entire series, regularly exhibiting disdain for her daughter's burgeoning faith. But more so than she's ever done with Paige, she opens herself up to the concept of God in "Darkroom," happily partaking in a sacrament that bonds her to the man with whom she's spent nearly 20 years.

It's unlikely, however, that Elizabeth agreeing to a religious wedding means she's had a complete change of heart. She's lived for two decades as a foreigner, speaking a foreign language and using a name that isn't her own. Any opportunity she has to slip back into her identity as Nadezhda, Soviet citizen, is a rare one, so if it means listening to a Russian priest talk about God and partake in a few faith-based rituals, it's worth the sacrifice.

Ultimately, this ceremony wasn't about God or belief, but about making Philip and Elizabeth an even stronger marital unit as they once again face the latest, biggest threat to their familynullnull: Pastor Tim.

The religious juxtaposition in "Darkroom" could not have been more stark. Just as it seems Elizabeth is starting to accept whatever small, positive role faith could play in her life, all her fears about its potential for destruction are instantly reignited. Paige, who has resumed snooping in Pastor Tim's diary, has discovered his support and mentorship has been a lie. While Tim feeds her encouragement in person — saying things like, "You're going to do great in life; there's no doubt in my mind about that" — he's singing a very different tune when he sits down to record his thoughts on paper.

Although Philip and Elizabeth initially voice their disagreement with their daughter's unauthorized investigation, the damage has already been done now that Paige knows the minister "fears for her soul." When the Jennings suggest using their sources to get Tim a job offer abroad, Paige, who's been so emotionally betrayed by this so-called man of God, asks them to move forward with that plan by the end of the hour.

However, Paige's decision to take her "research" one step further — photographing several of Tim's diary pages — may have sealed the pastor's fate in a far more serious way. In the episode's final scene, which is one part disturbing and two parts beautiful, Philip and Elizabeth engage their daughter in yet another spy lesson: the art of developing pictures in a makeshift darkroom. To the strains of Bauhaus' "Slice of Life," Philip, Elizabeth and Paige grow stronger and tighter as a family as they hang Paige's pictures on a clothesline to dry. Under a glowing red lamp that enhances their collective Soviet essence, the Jennings family reads Tim's damning — but not false — words about "P.J."

In short, Pastor Tim thinks that what Philip and Elizabeth have done to their daughter is "monstrous," far worse than sexual abuse or an affair. You have to wonder, especially when you see what I like to call "Elizabeth's angry assessing face," if the clock is ticking once again for Tim. It's already been established that having him killed would open up the Jennings to major exposure, mainly because Tim's wife, Alice, also knows about their Soviet identities. But we've already seen what happens when someone threatens Paige — Elizabeth has no qualms about going all mama bear to protect her daughter. Adding to this already complicated predicament? Taking out Pastor Tim and Alice would leave their baby daughter an orphan.

But whether Tim and Alice get to live isn't important as "Darkroom" comes to an end. What is paramount is the unbreakable bond that now exists between Philip, Elizabeth and Paige, how it is both magnificent and dangerous at the same time. Paige has been working tirelessly for years to understand who she is and where she comes from, and she's never before been closer to her parents. But the risk here is the more she knows, the more vulnerable she is toward incrimination should the American authorities ever arrest Philip and Elizabeth.

There's one more sad element to this episode-closing family portrait: It serves as a glaring reminder that Henry is growing further and further apart from the Jennings, which, for someone like him, may be a good thing. Earlier in the episode, Paige talks to Philip about how Henry is "different," and without directly saying so, says he's likely better off far away at boarding school than he would be getting involved with his parents' reality.

At this point, even Gabriel would admit the truth of that sentiment.